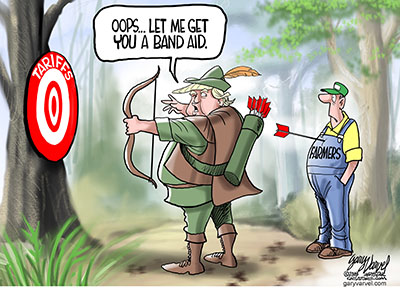 I always knew Ray (Anglin) to be very friendly, warm-hearted. The first night I met him, he invited me into his home and offered refreshments, a total stranger. What happened is just horrific.

Ray was a good man and helped anyone he could. He never started anything. It was generally self-defense. …

When we first met April and Ray, they immediately became family. We were all there for each other.

You don’t get to badmouth someone just because of what things seem like on paper.

How are you going to sit there and post about his past and ruin his memory? His children have to look at this.  … People just lost family members and you were just sitting there trashing them.

Just because something’s uncomfortable to talk about doesn’t make it untrue or unfair to report. Past violence is certainly relevant to a murder-suicide. I’m sorry for everyone’s loss but that doesn’t make this article wrong or disgusting.

Why is it necessary to bring up the past when there are three innocent children who are grieving the loss of not one but two parents? This is downright disrespectful to the family that they left behind. … Let these children and family members grieve in peace. They deserve a better article than this to help them remember their parents.

Ray was one very great guy. He would give you the shirt off his back. His barroom problems were always induced by others. He was the biggest man in the room, normally. Drunks liked to push his buttons. He did not start trouble.

April loved Ray with all her heart. To bash and smear his name hurts all family friends. This is so wrong. … The world has enough pain and heartache already.

I hate to hear bout the way they died. May the family find peace and forgiveness.

Have employers raised their base salaries to attract workers?

In the recession, when employers had the upper hand, they demanded advanced degrees and many years of experience for entry-level (read: low pay) positions. Now that there are more jobs than employees, shouldn’t they be hiking salaries up? According to what I see on job sites, they are not.

Statistically, real wages for workers have fallen several percentage points. North Carolina pays teachers less now (relatively) than they did during the recession. Our minimum wage is not sufficient to keep up with inflation/cost of living increases.

As the old joke goes: “The economy is booming! There are jobs for everyone!” “Yeah, I know. I’ve got three of them, myself.”

Well said. I can’t believe the free pass Trump is getting from his flock. Also from his appointed cronies.

Lord, you gave them eyes but they cannot see. Jerry claims “I’m not a raving liberal.” You sir, passed “raving” many moons ago. When the facts about President Trump’s meeting with Putin come out, you will see that his comments about shipping people to Russia was a response to Putin stating he would allow that crook Mueller to talk to Russian targets. No one is going anywhere. Wake up. …

You’re not scared of Putin, you’re terrified of Trump’s success. What is it with the left and hypocrisy?

Cite some facts to support your opinion.

Wow, I see Wisconsin is tough on domestic violence, a couple of $100  court assessments for spousal abuse. That ought to make him think again — not.

Maybe someone here should start a blog, “Madison Free Press,” and headline this saga.

I hope that none of us lose sight of the fact that this man (innocent until proven guilty of course) is a perpetrator of domestic violence and that there is a woman in Wisconsin who is his victim. She has my sympathy, and I hope that she is able to recover from this horror.

Having said that though, if his actions kill the Rowan Free Press, I will certainly celebrate the death of that cancer on our community.

I can’t decide if this is irony, karma or justice.

We have a beautiful and clean school to work at daily. Everyone should be this fortunate.

… ‘Are you Taylor Miller’s mother?; Family opens up about 19-year-old’s opioid death

Thank you for sharing your story. There are so many families going through this. God bless you.

Another reason why people battling chronic pain can no longer be treated, but if we are, it is at such a low dose it does nothing.

What are people in chronic pain supposed to do?

Help shouldn’t be so hard to get nor so expensive. I am really sorry for Taylor’s mom; hope she gets help too. Grief isn’t easy to bear alone. God bless this family.

… Letter: President Trump deserves the support of the people

The lack of leadership and humanity under Trump is amazing, and it is even more amazing that his backers do not want to see or believe the truth about him. … His continual lies and ripping apart the fabric of our country, intelligence agencies, etc., is far too much to ever earn the respect of respectable people.

If people spent as much time finding the facts instead of listening to the View or Facebook, then they would be more supportive of President Trump.

If as much work was put into finding all he has done for our country that has been put into slandering this president, we could have come a long way. President Trump loves America, Obama did not.

… Letter: So we’re bailing out farmers?

Think you spoke a little to soon on this matter. The EU has agreed to cut tariffs and import more soybeans: talking heads are still spouting yesterday’s guessing game. Meanwhile the Dow Jones Industrial Average is surging.

I have said that if Trump was ultimately heading towards no tariffs, that his trade war made sense. …

If Trump is able to pull this off, I don’t see how anyone with real conservative free-trade principles can object.

Maybe Trump’s approach is working? I’ll never get tired of all this winning.

… Patrick Snider was a good one

He was a great baseball player, and he is also truly missed.

What a great guy, always humble and kind. Love his Mom.

I miss this young man.

As his grandmother, I want to just say thank you.

… Kannapolis teacher charged with trafficking in heroin or opium

… After 50 years in banking, Millie Cress heads for retirement

Millie is a woman of true integrity. She always greets you with a smile and is willing to assist you in any way she can. She will be missed.