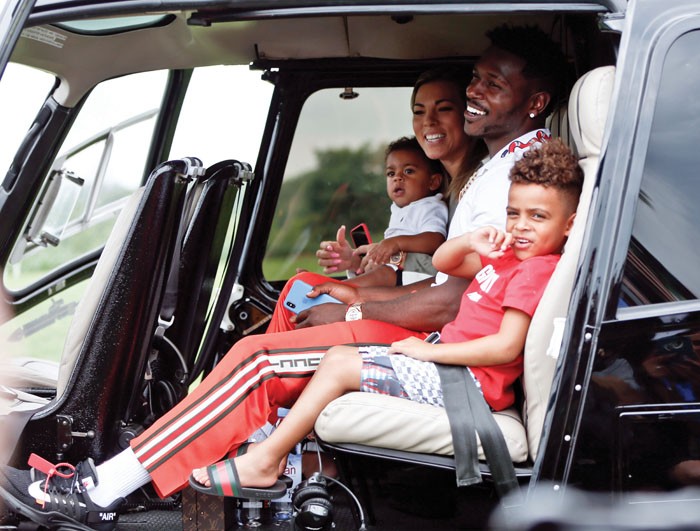 LATROBE, Pa. (AP) — The theatrics came from all the usual suspects.

So did the silence.

Antonio Brown, just weeks after wondering aloud why he receives so much attention, arrived in a helicopter with his family in tow not far from a Nike-sponsored bus emblazed with his latest hashtag “Destroy Doubt” splashed above the front.

Yet the loudest statement by a member of the Pittsburgh Steelers as the defending AFC North champions arrived for their annual three-week stay at Saint Vincent College came from someone who didn’t say anything at all.

While his teammates carried their gear into dorms then headed to the practice field for light conditioning work, All-Pro running back Le’Veon Bell stayed away.

The optimism that Bell and the Steelers preached during the offseason about the prospects of signing a long-term deal has faded, replaced by the reality that he will likely wait until the end of camp to sign his one-year franchise tender to start what could be his final year in Pittsburgh.

“It’s a business,” Brown said. “Everyone (has) got to do what’s right for their business. When he comes we’ll welcome him.”

Even if the men Bell lines up with would like to see him a little earlier than they did in 2017. Bell waited until Labor Day to sign his franchise tender and although he arrived in shape, it took several weeks for him to get rolling. Bell averaged 103 total yards during Pittsburgh’s sluggish 3-2 start then put up 143 total yards per game during a 10-1 sprint to the finish.

Given a choice, the Steelers would prefer not to have to wait for one of the NFL’s most versatile players to start playing like one.

“I’m going to send him a text like, ‘Yo, come in four days earlier, try to get a couple practices in,” center Maurkice Pouncey said with a laugh.

Coach Mike Tomlin called his communication with Bell “fluid” and “normal” but declined to get into specifics.

“I’ll leave the details of it between him and I,” Tomlin said. “I want to stay focused on the guys that are here.”

While second-year back James Conner, rookie Jaylen Samuels and veteran Stevan Ridley will get plenty of chances to show Tomlin and offensive coordinator Randy Fichtner — promoted in January when Todd Haley’s contract was not renewed — what they can do, the starting job goes to Bell the second he walks through the door.

The 25-year-old remains a vital part of Pittsburgh’s best chance at unseating New England atop the AFC. He shouldn’t lack for motivation after the Los Angeles Rams signed Todd Gurley to a contract extension on Thursday that made him the highest-paid running back in the league. At least, that is, until Bell potentially hits the open market next spring.

“No matter what he’s going to get paid eventually,” said Pouncey of Bell, who is guaranteed to make $14.5 million this season.

Bell tweeted out “lol and ppl thought I was tripping?” after the terms of Gurley’s deal were released and later added “I’m actually extremely happy” when someone on Twitter suggested he was “mad” at the Steelers.

Still, the inability for Bell and the team that took him in the second round of the 2013 draft to find common financial ground over the course of two straight offseasons virtually assures that Bell will be playing elsewhere in 2019. His looming departure adds a level of urgency to a core group that has reached the playoffs four straight years, but has been unable to get to a Super Bowl despite its considerable star power.

“Time is running out for everybody,” Pouncey said. “I know it’s all fun and games for everybody at the beginning, but man it’s time to win. It’s been too long.”

The past six months may have been the most painful after Pittsburgh rolled through a 13-3 regular season only to get stunned at home by Jacksonville in the divisional round.

“Honestly we didn’t think they could score 45 points in my opinion but hell, they showed me wrong,” Pouncey said.

And now the Steelers must press forward. They’ve totally revamped the secondary. The linebackers must find a way to cope without the injured Ryan Shazier. The strength remains on the offense, one that will spend the next six weeks getting adjusted to Fichtner’s playbook while wondering when Bell’s familiar No. 26 will jog on the field.

“Every year there’s always pressure to win the trophy,” Brown said. “And this year will be a lot more added pressure.”

NOTES: The Steelers agreed to terms with free agent wide receiver Eli Rogers, who will remain on the Physically Unable to Perform list while he recovers from knee surgery. … Rookie S Terrell Edmunds reported for camp on time. The first-round pick didn’t sign his contract until Tuesday, but says he was never concerned about missing time.