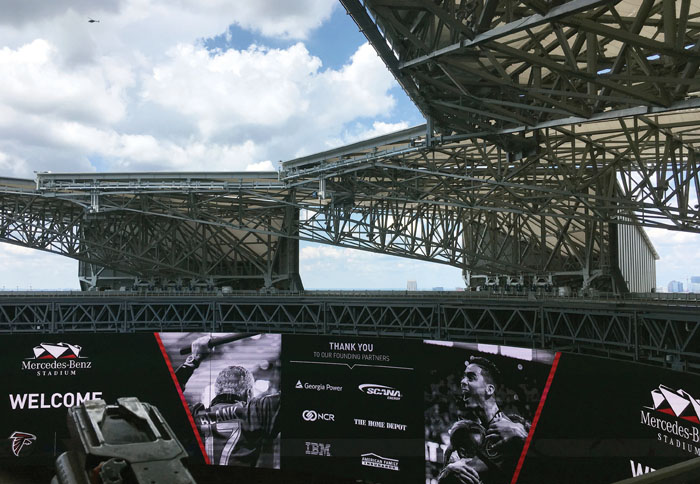 Blue sky and sunshine are seen through the roof of the Mercedes-Benz Stadium after the roof was opened during a demonstration for the media Wednesday, July 25, 2018, in Atlanta. The roof was closed for most of the 2017 NFL season due to design problems and now can be opened and closed in minutes. (AP Photo/Paul Newberry)

ATLANTA (AP) — With a few shorts blasts of a horn, the intricate steel structure came to life. Slowly, the eight mammoth pods above Mercedes-Benz Stadium began to slide along railroad-like tracks, revealing the towering downtown skyline off to the east, the glimmering gold dome of the state capitol to the south, and a brilliant blue sky sprinkled with puffy, white clouds overhead.

Nearly a year after the ballyhooed opening of the $1.5 billion stadium, the retractable roof finally is open for business.

“We never had any doubt that this was going to work,” said Mike Egan, who oversaw construction of the stadium. “But to see it open — now I don’t have to show up at cocktails and have people ask me about the roof anymore. That’s what I’m most excited about.”

A process that took far longer than expected — and produced plenty of ridicule about whether the complex, camera lens-like design would ever work — finally paid off Wednesday when stadium officials showed off the finished product.

The roof opened quicker than the projected 12 minutes in its original design, and only needed about seven minutes to close. Stadium officials also insisted that leaking issues, which embarrassingly turned up during last season’s college football national championship game, had been corrected.

The massive project, which broke ground in May 2014, is officially completed.

That means this season’s Super Bowl could be held with the roof open if the NFL deems the weather outside to be acceptable.

“It’s working just exactly the way it’s supposed to,” Egan said. “We can’t wait until the fans are in here. They’re going to be blown away.”

The first demonstration of the fully functioning roof for the general public is set for Sunday, when the NFL’s Atlanta Falcons will hold a training camp practice at the stadium. Some 50,000 fans are expected.

Egan said he never had any doubts about the roof working, but additional modifications were needed after the stadium opened last August. That meant the roof has been closed for all but three events — last season’s Falcons opener and two games for Major League Soccer’s Atlanta United, who already have set numerous attendance records in their new home .

In essence, Egan said, more flexibility had to be built into the eight pods, each weighing roughly 500 tons, to ensure they didn’t burn out the motors that power the process. He said the modifications added slightly to the already costly price tag, but would be paid for entirely by Falcons and United owner Arthur Blank, not by the taxpayers.

To mark the roof’s belated completion, several dozen media members were taken to the top of the stadium — 300 feet above the field — for a first-hand look at the unique structure.

The massive pods were remarkably quiet as they slid along a pair of tracks in perfect synchronization. Other than a warning horn that wailed at the beginning of the movements, the only other real sound atop the roof was a comforting breeze on a day when the temperature climbed near 90 degrees.

The views of the city were spectacular from up above, but this wasn’t a perspective that fans will have on game day.

The media tour required a grueling hike to the top of the upper deck, two more climbs up a pair of metal staircases used by employees only, broken up a harrowing walk along a catwalk that would challenge anyone with a fear of heights.

At the end, there a steep, ladder-like staircase to navigate, akin to what one might find on a naval ship, to get through a small portal that opened up to the sprawling roof.

After plans were announced to build a new retractable-roof stadium to replace the Georgia Dome, which was only 25 years old, Mercedes-Benz Stadium was awarded three major events in its first three years.

This past January, Alabama defeated Georgia in an overtime thriller to win college football’s national championship . The upcoming NFL season will conclude in Atlanta with the city’s third Super Bowl. Finally, in 2020, the stadium will host the Final Four of men’s college basketball.

In 2026, Mercedes-Benz Stadium is likely to be one of the prime venues for the world’s biggest sporting event, soccer’s World Cup . The winning bid submitted by the United States, Mexico and Canada included a provisional schedule with six games being played in Atlanta, including a semifinal.

Now, the stadium also has a roof that opens.

“This architectural icon that is coming online as of today, it’s only going to take our fan experience to the next level,” said Steve Cannon, chief executive officer of Blank’s AMB Group. “We’re really excited about what the future holds for Mercedes-Benz Stadium and all the big events we have planned over the coming months and the coming years.”

Brian France says his family is still committed to…