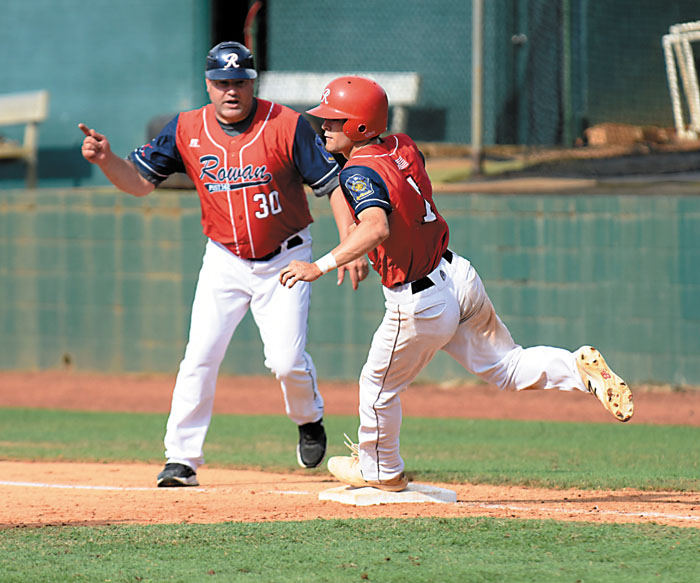 SALISBURY — On the night of June 22, the Rowan County American Legion team turned in an error-plagued, 7-2 loss at Kannapolis.

Kannapolis scored five unearned runs in the first inning to hand Rowan ace John Owen his only loss of this season. Kannapolis stood 6-0 in the Southern Division of Area III standings, Rowan was limping at 2-2 and in third place, and coaches had little choice but to shake things up, to think outside the box.

The move of outfielder Clayton Gilmore to shortstop, and the corresponding shift of shortstop Bryson Wagner to second base looked like sheer desperation at the time, but it salvaged this season. Rowan got tighter defensively in two places, pitching confidence improved and team confidence soared. Rowan turned things around, finished first in the regular season standings, won the Area III championship and starts play in the state tournament tonight at 7 p.m. at High Point University against Caldwell County. Rowan (31-10) is 16-4 since making that dramatic switch, including epic, five-game playoff victories against High Point and Randolph County.

“We just hadn’t been playing many clean games, and then in that big game at Kannapolis we made a bunch of errors early,” Gilmore said. “The coaches asked me if I’d mind trying shortstop, and I was happy to try it. I’d played some shortstop when I was at A.L. Brown, but shortstop is hard. The big difference from outfield is that you have to stayed mentally locked in on every single pitch. You never know what might happen.”

When Gilmore transferred from A.L. Brown to Jesse Carson for his junior season, it was thought that his baseball future was on the mound. Gilmore has a serious fastball — 87 mph — and can spin a decent curveball, but pitching opportunities were limited at Carson, which had a staff led by Owen White, Maddux Holshouser and Cameron Prugh. Carson also didn’t need Gilmore at shortstop because White was a fabulous shortstop, and whenever White pitched, Prugh simply slid over from second base.

So Gilmore settled into the Carson outfield for two years. He can throw and is very quick, the major physical requirements for a right fielder. He became a good one for coach Chris Cauble’s Carson Cougars.

“I guess my best game for Carson was this year in the first round of the playoffs against West Rowan,” Gilmore said.

White was striking out a lot of Falcons that night, but Carson still trailed 1-0 most of that game. Gilmore got a hit and scored the tying run in the sixth. Then in the seventh, he came through with the walk-off single to win it.

In the summer of 2017, Gilmore played showcase ball for the South Charlotte Panthers on an elite team that included White, Holshouser and Prugh, as well as Kannapolis Legion standouts Rohan Handa and Cord Butler. Gilmore pitched and played the outfield.

Gilmore, who is headed to Pitt County Community College, had never played Legion ball before this summer.

“The biggest reason I came out for Legion was Coach (Jim) Gantt,” Gilmore said. “He’s a college coach and I didn’t think anyone could prepare me better to play college baseball.”

In the early going, Gilmore sat out a few games, but he usually found himself somewhere in the Rowan County lineup. Gantt looked at him in center field as well as right field and put him on the mound a few times.

“The biggest thing you could see about him was that he was a competitor, and I’d always rather try to calm down a competitor than try to pump up a passive guy,” Gantt said. “He’s going to make a few mistakes because he’s so aggressive, but he’s never afraid of any challenge. He’s an athlete, and we just have to let him be an athlete and go do it.”

Rowan’s roster features an overload of outfielders and a shortage of infielders. Rowan had Hayden Setzer, Luke Barringer, C.P. Pyle and Wayne Mize as regular outfield options. Two of the relief pitchers, Daniel Sell and Jake Perez, also are competent outfielders. It made a lot of sense to try Gilmore in the infield.

Gantt knew after watching Gilmore take ground balls at shortstop at one practice that he was Rowan’s best option at that demanding position. Gilmore not only has a powerful arm, it’s a very quick arm. His footwork was surprisingly good, and Gilmore exudes the sort of confidence that allows him to move on from an error — errors are going to happen at shortstop — and make the next play like it never happened. Gilmore is one of those guys who might go 0-for-4 today but is still absolutely certain he’s going to get four hits tomorrow.

“There were a lot of things that went into moving him to shortstop,” Gantt said. “We had a lot of errors going on because because the speed of the game on the left side of the infield can pose problems for a lot of guys. The throw is long, you try to rush, and you make errors. We were were struggling. But the move has worked out well for us. The other part of that move with Gilmore, a big part of it, is that Bryson Wagner has been exceptional for us at second base. He’s making a lot of good plays, turning double plays.”

The tipping point for Rowan’s season was the night of June 27 at Newman Park, the rematch with Kannapolis. That’s when Gilmore delivered the biggest hit of the regular season.

Behind Handa, Kannapolis was leading 3-2 going to the bottom of the seventh and appeared on its way to winning the division. But Gilmore led off the seventh with a cannon-shot triple to the right-center gap.

“He’d just thrown me a slider in the dirt, so I was sitting on a fastball and got one,” Gilmore said.

Chandler Lippard’s sacrifice fly scored Gilmore to tie the game, and Mize eventually won it with a walk-off single. That win salvaged another division championship for Rowan. It meant a first-round playoff bye and it meant a No. 1 seed for the Area III playoffs.

Gilmore batted ninth some during the season and also led off some, but he found at home in the No. 2 spot in the lineup, batting after Setzer and in front of either Lippard or catcher Trevor Atwood. That means he’s surrounded by three of Rowan’s strongest hitters.

“It’s definitely a place in the lineup where I’m going to get some pitches to hit,” Gilmore said. “They’d rather pitch to me than those guys.”

Gilmore’s batting average is a modest .263, but he’s never overwhelmed by the situation and is probably a .363 hitter in clutch situations. His 35 hits are fourth on the team and he’s third in runs scored with 34. If Rowan is down a run going to the bottom of the seventh in the state tournament, there’s no one Gantt would rather have leading off that inning than Gilmore.

With Rowan’s Area III semifinal series with High Point tied at two games apiece and with Game 5 deadlocked at 2-all, Gilmore got things started for Rowan in the bottom of the seventh with a double, moved to third on a passed ball and scored the run that decided the game and the series on Lippard’s walk-off hit.

“Gillmore is not just a fast guy who’s trying to hit the ball on the ground and beat out infield hits,” Gantt said. “He’s not a home run hitter, but he’s got gap power. He’ll get his share of doubles and triples.”

As a fast, aggressive guy, Gilmore can create havoc on the bases, can put pressure on opposing defenses. He’s also run into the occasional, head-shaking out trying to take the extra base.

“He knows his speed better than anyone else does, and if he thinks he can make it,well,  he goes for it,” Gantt said. “He’ll get thrown out some, but the thing is, only the fast guys get to make mistakes on the bases. The slow guys never have a chance to take a chance.”

When did Gilmore figure out he was fast?

“It was a while back,” Gilmore said with a laugh. “One day after practice in Kannapolis, I got into a race with Cord Butler (who spent some time as A.L. Brown’s quarterback), and it was basically a tie. Cord could fly, so I figured I had to be pretty fast, too.”

While no 60-yard dash times are posted, Gilmore and Pyle appear to be the two fastest guys on Rowan’s current roster.

“Yeah, we’ve raced, and it was close,” said Gilmore, who declined to name a winner. “C.P is really fast.”

Speed helps, and Gilmore has gotten smoother and steadier at shortstop with each outing. The more practice reps he’s gotten, the more assured he’s gotten. He’s embraced the challenge of making the long, quick throw, and he understands how much his position switch has helped his team.

At Pitt Community College this fall, Gilmore will be a teammate of Owen and former Rowan star Chandler Blackwelder. He figures he’ll make a return to the outfield for Pitt, but versatility never hurts. He should be able to get on the field somewhere. It might even be on the mound.

“Pitt has a great program, and I’m glad to be getting a chance there with some good teammates,” Gilmore said. “Believe me, playing on John Owen’s team is always a lot more fun than playing against him.”

Rowan was exhausted after the Randolph series, which followed right behind a grueling High Point series. That was 10 pressure-cooker games in 11 days. Rowan, which had to fight through four elimination games, survived.

NOTES: Rowan rested Monday and Tuesday. … Left-hander Daniel Durham (3-1) will start on the mound for Rowan County tonight. Gantt hasn’t named the other starters yet. He said that will depend on matchups and Rowan will be able to scout pool opponents Pitt County and Whiteville today.  The cost for the two-game session at High Point’s Willard Field is $12. … Rowan plays Pitt County at Finch Field on Friday at 7 p.m.