Ledecky cruises to easy win in 800 free at US Nationals 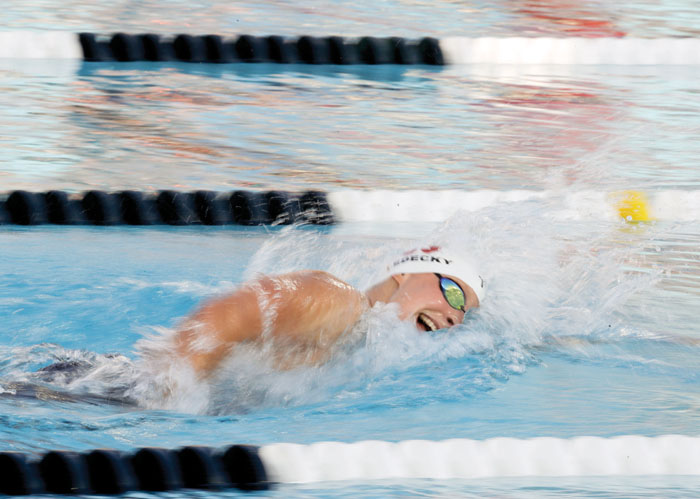 IRVINE, Calif. (AP) — Katie Ledecky cruised to a nearly 11-second victory in the 800-meter freestyle Wednesday on the opening night of the U.S. national championships.

Ledecky was under her own world-record pace through the first 300 meters before dropping off and finishing in 8 minutes, 11.98 seconds on Wednesday night. She failed to crack the top 10 performances in the event, which all belong to her.

Leah Smith chased Ledecky all the way and touched second in 8:22.79.

Ledecky earned the 14th national title of her career and a spot in the event at next month’s Pan Pacific championships in Tokyo, site of the 2020 Olympics.

“It didn’t feel super sharp, but it always takes me a little time to get into these meets,” Ledecky said. “I know people are chasing me and that’s motivating.”

“I think there’s room for improvement,” said Manuel, newly signed to a suit endorsement deal with Tyr. “I’ve been doing pretty good things in practice that I haven’t been doing before.”

Five-time Olympic champion Missy Franklin was relegated to the C final of the 100 free, which she won in her first major meet since the 2016 Rio de Janiero Games. She is coming back from two major shoulder surgeries and a struggle with depression.

In the men’s 100 free, Blake Pieroni rallied to hold off 2012 Olympic champion Nathan Adrian. Pieroni won in 48.08 and Adrian touched in 48.25. Townley Haas was third and world champion Zach Apple was fourth to earn trips to Tokyo.

Defending world champion Caeleb Dressel barely made it into the final and finished sixth.

“It’s certainly not the best we’ve seen from Caeleb,” Adrian said, adding that he expects to see Dressel to drop more time.

Jordan Wilimovsky, who is already on the Pan Pacs team in open water, earned a spot in the pool events by winning the 1,500 free in 14:48.89.