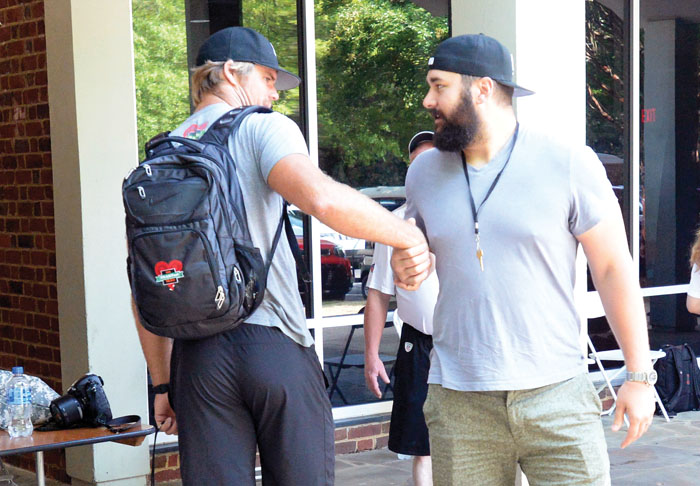 SPARTANBURG, S.C. (AP) — Tight end Greg Olsen realizes there’s a sense of urgency to win a Super Bowl ring now for a returning core group of Carolina Panthers who are fast approaching the end of their NFL careers.

Julius Peppers is 38 years old. Mike Adams is 37. Thomas Davis is 35. Ryan Kalil is 33, and has already said this year will be his last. The roster includes 19 players that are 29 or older, including Cam Newton.

Olsen knows how difficult that can be, particularly when competing in the toughest division in football. Three NFC South teams won at least 10 games last season and reached the playoffs.

Carolina won 11 games — and was a wild card team.

Olsen is among 21 holdovers from the NFC Championship team that went 17-1 three seasons ago before losing to the Denver Broncos 24-10 in the Super Bowl.

“Coming so close and realizing just how hard it is to get there and fall short adds to that urgency,” Olsen said. “A lot of us have been playing this game a long time. We know there is no guarantee in anything. So you have to take advantage when you can. …  There is no telling how many years go by until you get a shot at another one.”

Panthers coach Ron Rivera said he feels that sense of urgency among some of his veterans, but is confident the players will “approach things the right way and build to where we want to be.”

While the core of the team remains mostly intact — the exceptions being Jonathan Stewart, Charles Johnson and Kurt Coleman, who were released — the Panthers will have the challenge of adapting to three new coordinators.

Eric Washington takes over the defense after Steve Wilks became the second Carolina defensive coordinator to leave for an NFL head coaching job in two years.

Norv Turner, who once coached Troy Aikman, Emmitt Smith and Michael Irvin to a pair of Super Bowls in the early 1990s with the Dallas Cowboys, replaces offensive coordinator Mike Shula after the Panthers finished 19th on offense last year.

The defense and special teams won’t change much, but the offense is expected to look noticeably different under Turner, who will be in charge of getting the most out of Newton, one of the game’s most dangerous dual-threat QBs.

Newton combined for 45 touchdowns passing and rushing with 10 only interceptions in 2015 to earn league MVP honors. In the two years since his production has dropped off with 52 combined touchdowns with 30 interceptions.

Newton is learning a new scheme under Turner, but at least he’s healthy.

Last year he missed most of the offseason workouts and the early portion of training camp recovering from shoulder surgery as the Panthers eased him back in.

Wide receiver Devin Funchess said Newton is full of energy this summer and “ready to rock.”

Carolina is to build on four trips to the playoffs in the last five seasons.

Christian McCaffrey said the Panthers have their eyes set on winning a Super Bowl and nothing less — something the second-year running back believes is “absolutely” possible.

“We have the guys, we have the talent and we have the leadership,” McCaffrey said. “We have some unbelievable coaches as well. So we are excited.”