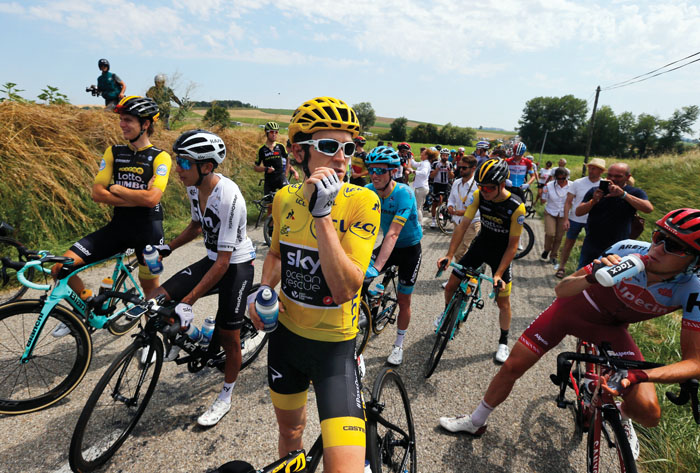 The only thing lacking from the wild 16th stage of the Tour de France on Tuesday was a shakeup in the overall standings.

Frenchman Julian Alaphilippe took advantage of his downhill skills to win the first of three mountainous legs in the Pyrenees, which was briefly interrupted when police used tear gas to disperse a farmers’ protest that had blocked the road with bales of hay.

The overall standings were unchanged. Geraint Thomas in the yellow jersey, second-placed Chris Froome and third-placed Tom Dumoulin all crossed together nearly nine minutes behind.

The farmers’ protest occurred 30 kilometers into the 218-kilometer (135.5-mile) leg from Carcassonne to Bagneres-de-Luchon.

Thomas, Froome, world champion Peter Sagan and other riders were treated with eye drops due to the tear gas amid a 15-minute delay.

“I just felt my throat and nose were burning, eyes were burning afterward,” Froome said. “But I think quite a lot of riders were in a similar situation.

“Thankfully the effect didn’t last long,” Froome added. “It was just a temporary thing with stinging and burning.”

It was the latest in a series of incidents involving spectators during this year’s race, with Team Sky riders being pushed and spat on and 2014 champion Vincenzo Nibali having his back broken in a crash when a fan caught their camera strap on his handlebars.

“We feel safe. Obviously on some of the climbs not everyone’s our fans but we don’t feel threatened,” Thomas said. “It’s hard in cycling when you’re just on the open road. It’s not like football or something. Everyone’s doing the best they can and hopefully everyone can just behave and let us race.”

The small group of farmers from the Aude department were protesting a planned reduction of European Union funding, according to French authorities.

“We are not going to lock the riders in a stadium or a tennis court,” Tour director Christian Prudhomme said. “People should not block the road, no matter what causes they are fighting for.”

Thomas remained 1 minute, 39 seconds ahead of four-time champion Froome, with Dumoulin 1:50 back.

Alaphilippe took the lead when Adam Yates crashed on a technical descent in the finale.

“I knew the finale was tricky,” Alaphilippe said. “I was sad for (Yates) but it could have happened to me, too, because I took a lot of risks. … I went all out for 220 kilometers today. I’m exhausted.”

Belgian rider Philippe Gilbert was leading when he crashed earlier in the stage while descending from the Col de Portet-d’Aspet, hitting a wall and flipping off his bike spectacularly but avoiding major injury. It was the same descent where Italian rider Fabio Casartelli died during the 1995 Tour.

“I thought I was broken everywhere,” said Gilbert, a teammate of Alaphilippe’s on the Quick-Step team. “But I ended up more or less OK.”

However, Quick-Step later announced that Gilbert, a former world champion, was withdrawing from the Tour with a fracture on his left kneecap.

“This isn’t how I wanted to finish my Tour and leaving it like this really hurts,” Gilbert said.

Alaphilippe also won the 10th stage and is wearing the polka-dot jersey of the mountains classification leader.

Yates led Alaphilippe by 20 seconds at the top of the Col du Portillon climb 10 kilometers from the finish but lost control with 6K to go, falling to the pavement on a left turn and sliding across the road.

“You never know what’s coming up on some of these corners,” Yates said. “There was a bit of downforce or something and I came down, that’s all there is to it.

“Morale’s pretty damaged right now. When you come so close to winning a stage of the Tour, it’s pretty devastating,” added Yates, who won the young rider classification in the Tour two years ago.

Alaphilippe, who was already gaining ground on Yates, quickly passed the British rider and had time to celebrate before the finish, smiling at the crowd and shaking his head in disbelief.

The race remains in the Pyrenees on Wednesday for what could be the most challenging stage of the Tour, a 65-kilometer leg from Bagneres-de Luchon to Saint-Lary-Soulan Col du Portet that features three grueling climbs, including an uphill finish — and hardly a stretch of flat road.

“It’s going to be massively decisive,” Thomas said. “That last climb is possibly the toughest climb in the Tour — 16 kilometers, 2,200 meters (altitude). There’s definitely going to be some splits.”