Tiger’s good enough to win, just like everyone else 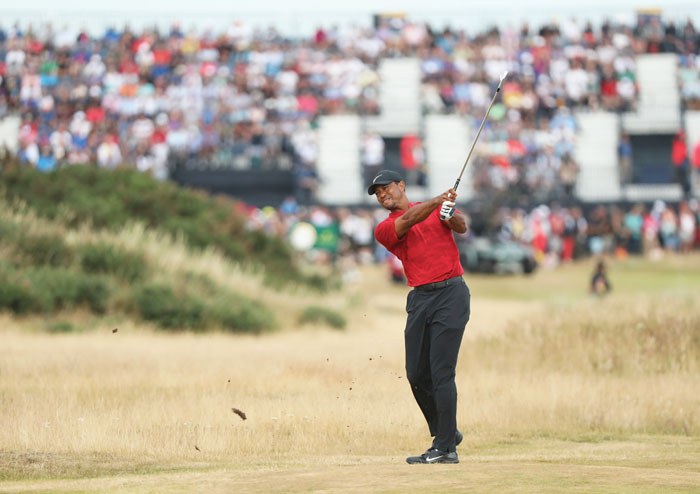 CARNOUSTIE, Scotland (AP) — The British Open bustled with excitement as the occasion began to unfold, with mobile phones zooming in to capture the moment from the best angle available.

This wasn’t on the golf course. It was in the media center.

The subject was a large, yellow leaderboard at the front of the room that showed Tiger Woods alone at the top in the final round. Some journalists at Carnoustie had never witnessed Woods win a major. Those who had wondered if they would ever see it again.

Woods stumbled with a double bogey on No. 11. He dropped another shot on the next hole. Just like that, he had eight players ahead of him, three more than he had to climb past when he teed off Sunday.

Maybe next time, and that’s not far away.

The PGA Championship starts Aug. 9 at Bellerive in St. Louis, where Woods has played once in a practice round ahead of the American Express Championship. Woods was on the course with Mark Calcavecchia on Sept. 11, 2001, when he was notified of the terrorist attacks. The tournament was canceled the next day.

Can he win another major? No one should doubt him now.

He still has to show it, however, and what Sunday at Carnoustie made clear is that it will take more than his mere presence on the leaderboard.

It felt like the Woods of old when he took the lead and the other contenders started an inexplicable slide. Jordan Spieth took a risk from the rough on the par-5 sixth, found the one place he couldn’t miss and made double bogey. Xander Schauffele topped a shot out of the rough, blew the next one over the seventh green and made double bogey. These things happen at Carnoustie.

They happened to Woods, too.

He might be Tiger Woods, but at the moment, he’s just like everybody else. The longtime PGA Tour slogan is, “These guys are good,” and so is Woods.

Missing is the intimidation factor until he wins again, and then wins some more.

“For a while, I thought Tiger was going to win,” Rory McIlroy said. “My mindset was, ‘Go and spoil the party here.’”

McIlroy was not among seven players who had a share of the lead in the final round. He was too busy catching up. But he’s been part of this scene already this year, and it didn’t rattle him. That was at Bay Hill, where Woods made birdie on the 13th hole to get within one shot of the lead.

“It wasn’t the birdie, it was actually when he was walking from the 13th green to the 14th tee,” McIlroy said. “There was a Tiger chant, and then I had to back off my putt and let that calm down and go and hit. So you know it’s there, but I don’t feel like it affected me in any way.”

Apparently not. He wound up winning by three shots. Woods hit a tee shot out-of-bounds on the 16th hole and tied for fifth.

Woods made his first birdie Sunday at Carnoustie on No. 4, and Spieth could hear the roar as he walked down the third fairway. An hour later, he noticed Woods in the lead, but only by accident. Spieth wanted to avoid looking at leaderboards, and he slipped on No. 8. He walked over to his caddie, Michael Greller, and said, “Damn it, I looked at the board, dude.”

“He’s like, ‘He hasn’t been in this position in 10 years, and you’ve been here how many times in the last three years?’ He was throwing it back at me,” Spieth said.

Spieth has had at least a share of the lead after any round in the majors 16 times dating to the 2014 Masters. The last time Woods was atop the leaderboard after a round in the majors was in the 2012 PGA Championship. Spieth was starting his sophomore year at Texas.

The players know all about Woods. The respect is there. He has no equal with more with 14 majors and 10 seasons with at least five PGA Tour victories.

But at this stage in his career, Woods has peers inside the ropes.

Francesco Molinari didn’t flinch while playing with Woods, even when he took the lead. Molinari was rock solid and bogey free, and the Italian joined Y.E. Yang as the only players to be paired with Woods in the final round of a major and win.

“It will be interesting to see going forward,” McIlroy said. “But this was his first taste of major championship … drama for quite a while. Even though he’s won 14, you have to learn how to get back.”

Spieth says Woods contending at Carnoustie was no fluke, at least for those paying attention this year.

“And he wouldn’t tell you, but he’s human,” Spieth said. “Experiencing that kind of pressure that he would have felt leading the Open on a Sunday is no different than anybody else, especially having not experienced it for so long.”

But don’t expect anyone to give it to him.