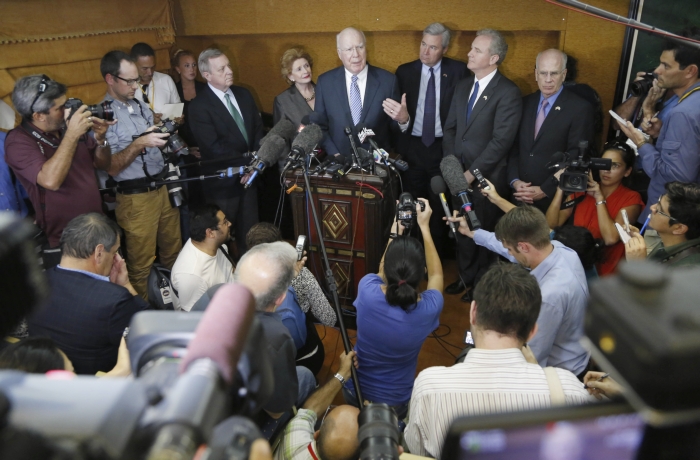 U.S. Senator Patrick Leahy from Vermont, center, speaks to the press as fellow lawmakers stand with him in Havana Cuba, Monday, Jan. 19, 2015. Fellow lawmakers standing with Leahy are, from left, Senator Richard Joseph Durbin from Illinois, Senator Deborah Ann Stabenow of Michigan, Senator Sheldon Whitehouse of Rhode Island, Congressman Chris Van Hollen of Maryland, and Congressman Peter Welch of Vermont. Cuba's foreign minister told the group of U.S. lawmakers that his country is open to greater diplomatic and trade ties but the congressional delegation did not meet President Raul Castro, the man who will make many of the key decisions about the new U.S.-Cuban relationship. (AP Photo/Desmond Boylan)

Here are the office addresses and phone numbers of members of Congress who represent part or all of Rowan County:

Burr, a Republican who represents all of North Carolina, has multiple offices in the state. The closest office is in Winston-Salem.

Tillis, a Republican who represents all of North Carolina, has multiple offices across the state. Two are relatively close to Rowan County.

Budd, a Republican who represents the 13th Congressional District, has offices in Advance, Mooresville and Washington, D.C.

• Hudson, a Republican who represents the 8th Congressional District, has offices in Concord, Fayetteville and Washington, D.C. Hudson’s closest office is in Concord.

The following is contact information for those representing Rowan County in the N.C. General Assembly: