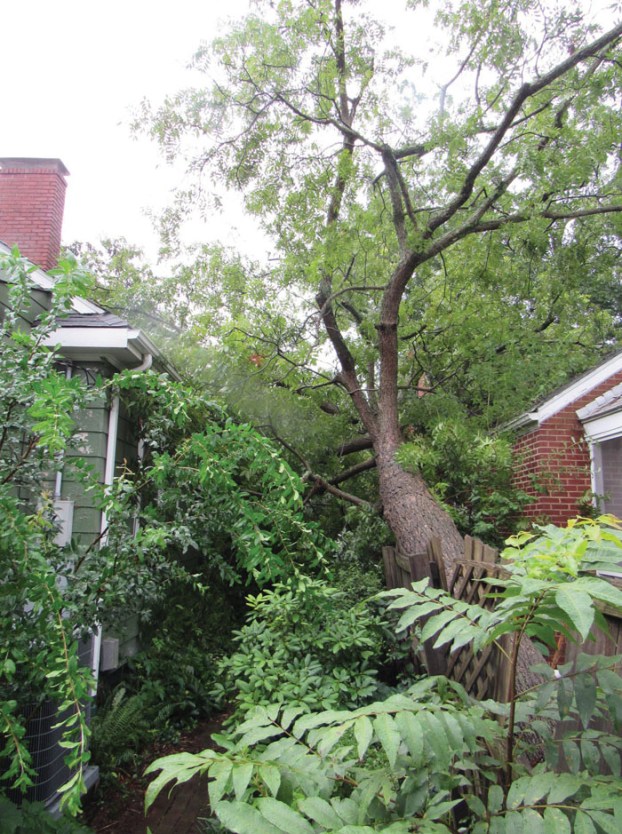 The pecan tree fell between the home of Donna and Pete Prunkl and Betty and Jim Carli. Photo by Pete Prunkl

SALISBURY — Betty Carli was alone in her South Ellis Street home Monday morning when she heard the noise.

It was 7:30 a.m., and she had just settled into her rocking chair with a copy of the newspaper when her house was shaken by a resounding boom.

“I didn’t know if we’d been hit with an earthquake or a bomb or what,” she said.

Carli said it took a few more minutes of sitting and wondering before she thought about the days of heavy rainfall and the 200-year-old pecan tree in her front yard.

So she ran outside to check. The 200-year-old tree? Still standing. But a 50-foot tree had fallen between her home and her neighbors’.

Downed trees and flash flooding have been widespread across Rowan County since Saturday.

Heavy rain and falling limbs have left some Duke Energy customers without power.

“Since the storm hit late yesterday, about 2,500 customers have experienced an outage,” said Duke Energy spokeswoman Meghan Miles. “Lighting damaged some equipment in one of substations in Salisbury, which impacted 1,900 customers (Monday night).”

Miles said power was restored about 1 a.m. Tuesday, and all customers who had an outage because of Monday’s severe weather now have power restored.

Chris Tester, stormwater program manager with the city of Salisbury, said the storms have led to some problems with drain pipes and catch basins.

Tester said that trouble is usually caused by an excess of leaves, debris and trash.

“That’s why we try to make everybody aware to not litter,” Tester said.

He suggests that residents clean out catch basins in front of their property whenever rain is expected to prevent potential flooding.

Carli said that given the size of the tree that fell in her yard, damage to her house is minimal. It broke a window in a closet, and an 8-foot limb punctured through the attic and into the upstairs hall.

Crews came to remove the fallen tree about 3 p.m. Tuesday, but they had to bring in a larger crane for the effort.

Pete Prunkl, whose home neighbors Carli’s, said it was as if the tree folded itself up between the two houses.

“We have limbs leaning against windows. There are limbs all over the place,” Prunkl said. “But only one window on our house is broken. … It was just a highly improbably event.”

Neither the Carlis nor Prunkls lost power or any other utilities despite the damage to their homes, which Prunkl said was “part of the amazement.”

Carli agreed, saying her golden retriever is the one that remains most shaken by the fallen tree.

“He won’t let me or my husband out of sight,” said Carli. “… But life is fine. I’m just so grateful that nobody got hurt.”

ENOCHVILLE — Ask anyone in Enochville, and they are likely to say they’ve eaten or worked at West Side Cafe.... read more