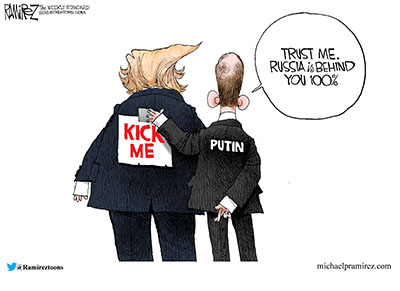 I am not a raving liberal. I voted for Reagan and both Bushes. I became disenchanted with the direction of the GOP during George W’s second term. That direction has veered ever further to the right since then, partially because of the angst many Republicans felt about a black man being president. We have experienced those results in our own state as the GOP many times acts as if they are above the law in denying basic rights to N.C. citizens.

That angst, fueled and enriched by Fox News and the NRA, resulted in Trump’s election. As it turns out, the election results also received a large assist from the Russian government. Based on the assessments of all of the intelligence agencies, denying Russia’s involvement shows a certain level of either denial or a lack of clear, objective thinking. Which, of course, tends to describe our current president and his followers.

While it was very troubling seeing Trump abase himself to Putin, the fact that he thought it was a “very good idea” for the U.S. government to turn over to the Russians one of our former U.S. ambassadors to Russia is mind-boggling. Let me repeat that: Trump thought it was a good idea to turn over to Putin’s secret service a former U.S. ambassador to Russia. All because that ambassador criticized Putin’s human rights records and his invasions of the Crimea and the Ukraine. And today we see that Trump wants so pull the security clearances for those who have criticized him. Putin has trained Trump well.

Another name on the list of people Vlad wanted to interrogate was Bill Browder. Mr. Browder is a U.S. businessman who used to do business in Russia. When he refused to pay up to Putin’s cronies, his business disappeared. Browder made public the corruption that is today’s Russia. Allegedly, a large percentage of the Russian corruption money ends up in Vlad’s bank accounts. One of Browder’s main sources of information was a Russian accountant named Sergei Magnitsky, who died in 2009 while imprisoned by Russia’s secret police.

Because of the outrage against this brazen act of suppression, the Magnitsky Act, a bipartisan bill, passed by the U.S. Congress and signed by President Obama in December 2012, the purpose of which was to punish Russian officials responsible for the death of Russian tax accountant Sergei Magnitsky.

Bill Browder is on Russia’s public enemies list. Turning him over to the Russians would surely result in his death. His personal security is ongoing as shown in the poisoning of Russian nationals in Great Britain. Read Bill Browder’s book “Red Notice” to really get a feel for the ruthlessness of Putin and his cronies. And our president thinks Vlad is a good guy.

Mueller proving Trump’s collusion with Russia will happen, as evidenced by the obvious collusion we all witnessed in Helsinki. I have never been more concerned about our government and our way of life in my 72 years on this planet. Remember, Hitler was legally elected and only later became a dictator because of the blind support of his followers who overlooked his transgressions because he was going to Make Germany Great Again.

Jerry Forthofer is a resident of Rockwell.

Other Voices: Buckle up for better chance