In the Trenches: Mike Satterfield helps keep quality in check at Freightliner 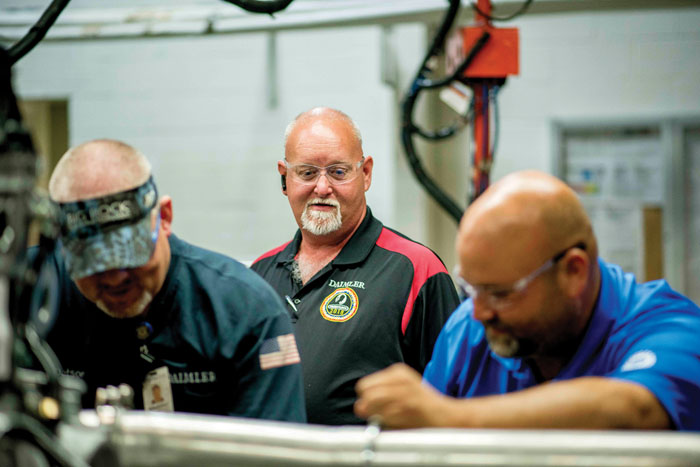 CLEVELAND — Mike Satterfield is many things, among them a family man, a veteran, a Freightliner employee, and a motorcycle rider.

He’s worked for Freightliner for 25 years and says there’s never been so much work as there is now. He hasn’t worked less than 70 hours a week since Easter, and the hours seem to keep coming.

Satterfield got out of the Marines in October 1992 and started at Freightliner in November. He had other job offers at the time.

“I knew when I got out here this is where I want to be,” he says. “You look at the business. Lyon-Shaw made me an offer — they made metal yard furniture. There’s a niche for that. Niches come and go. The trucking industry is pretty stable. I had seen trucks all my life. Of all the jobs I tried for, this is the one I knew wasn’t going away.

“My grandpa told me, ‘If you can find a job you know you can stick around, stay until you retire.’ I want a place that I can say I put in my time, 30 to 35 years. Now I did it. Lots of guys here can say that. The people here, they can tell you about the one place they’ve worked.”

He learned to weld as a youngster. His grandpa told him, “Even if you’re not making anything, you can arc a spark and learn to weld.”

He started in electrical work because of his hydraulics work in the Marines. In about the year 2000, he became a team leader. Today he is a team leader in the audit group.

“It gives us an opportunity to tell our co-workers where we can make our product better,” Satterfield says. “I like to get other people involved, too. If you’re working with a group of people and you want them to do it correctly, you have to allow them to participate in the resolution. Then they have an investment in the outcome.”

One of his team members’ tasks is to test trucks. They select sample trucks and drive to Union Grove, which is 29 miles from the Cleveland plant, pulling up hills and applying stop-and-go conditions. A test drive needs to be 50 miles, he says, and Union Grove provides parking lots for halfway checks to look for leaks, rubbing conditions, belt issues, damage to tires, hub problems — as well as making sure nothing is getting hot.

Then they head back to Cleveland, completing the drive at 58 miles.

Satterfield is a proud member of Rolling Thunder, a national group of veterans who ride motorcycles together to bring attention to the First Amendment and remind Americans of prisoners of war and those missing in action. The group has 90 chapters across the United States.

“I used to ride a Fatboy, but now I’m looking at an Ultra,” he says.

For the uninitiated, both are Harley-Davidson motorcycles. “Is there any other?” he asks.

Satterfield is not shy in his praise for Freightliner.

“People fight change. That’s human nature. But it’s funny to me how many people say, ‘I could do better elsewhere,’ but they’ve never gone. Since I’ve worked here, I’ve not looked elsewhere. I’ve been offered opportunities, but I’m not going anywhere.

“When my Lily was born, she was over four months premature.”

Satterfield pauses with emotion and, after several moments, he is able to speak.

“If I needed time, I got time. For 122 days, we drove to Charlotte every day. I think I paid for gas one time in all that time. Every time I turned around, there was another gas card. And it wasn’t just my guys. It was everybody at the plant. So yeah, this is family.”

He cites case after case of co-workers with personal challenges who have received generosity from Freightliner friends.

Today, Lily is 5 years old and progressing well. Satterfield speaks in awe of his wife, who bachelor’s degrees in both education and radiography and is working on her master’s degree. She’s a clinical instructor for the Rowan Cabarrus Community College radiography department.

“She amazes me,” he says. “How she schedules her time, gets everything done with a special-needs child, I don’t know.”

Freightliner has awarded a military-themed Ride of Pride truck every year for 17 years to a trucking company that shows value for the military. Satterfield is chairman of the drivers’ committee. The program originated in 2001 when a shift manager and veteran at the Cleveland plant proposed the project as a way to honor military veterans.

“Whatever it takes to let all our veterans know that the employees of Cleveland Truck Manufacturing Plant appreciate all they have done for us,” Satterfield says.

“Mike has been a loyal and dedicated employee of the Cleveland truck plant for many years, and perhaps his most rewarding accomplishment has come from his participation in the ‘Ride of Pride’ project each year,” Holden says. “Mike is a key member of the team that prepares trucks that honors our military and veterans for their service to our country. Mike accompanies these trucks to various events in the area where they are put on display for veterans and civilians alike to enjoy. The final event is a trip to Washington, D.C., each Memorial Day to be part of Rolling Thunder in our capital.”

Satterfield is happy at Freightliner.

“If a company treats employees fair, you notice. I’ve been here 25 and a half years. When I retire, I’ll have over 37 years in with this company. I just don’t see anybody better around.

“I love the people. I’m going back to something. You hear this all the time: ‘If you enjoy your job, you don’t work a day in your life.’”