Traveling couple visits Salisbury, another entry for the journal 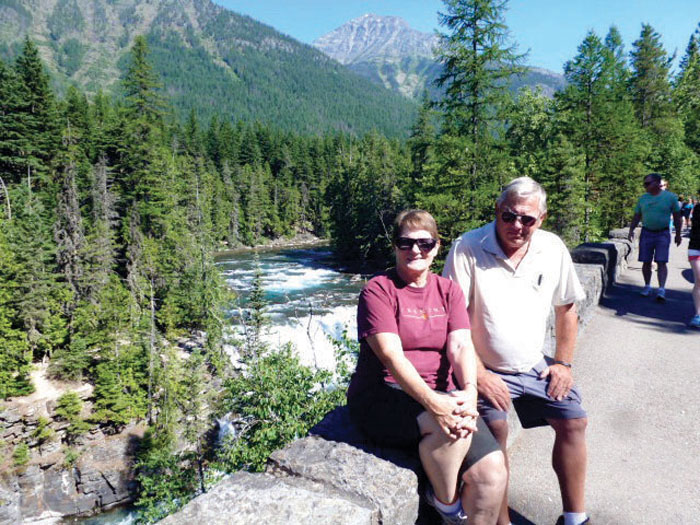 Maybe Johnny Cash didn’t actually go everywhere, but Karen Minard and Dan Rodwill are close to that goal. The couple have been traveling in their two RVs for the last 16 years.

Minard and Rodwill met on the road in 2003 and started traveling together and eventually started dating.

Rodwill is an Air Force veteran and a retired federal fire chief. Minard worked as a registered nurse for 30 years with the last eight working as a contract nurse and traveling for work.

Minard grew up in a Navy family, moving around frequently, never staying in one place for more than two years. Always growing up close to the coast, beaches are still Minard’s favorite and she says that the ones in Mississippi are “the most magnificent.”

The pair has seen and done some amazing things on their journeys together, including watching wildfires come over the mountains in a small town in Montana in 2013, looking for anacondas and cobras in Florida and “The Corn Palace” in Mitchell, South Dakota, an attraction featuring murals made solely of corn and corn products. They also attend festivals like the RV and Gem Show in Quartzite, Arizona, and “Mule Days” in Death Valley.

The pair loves to watch parades and see them whenever they can, and sometimes get to participate, somewhat reminiscent of “Ferris Bueller’s Day Off.”

The couple also tries to follow the Boy Scout rule, “leave the place better than you found it.” They pick up trash wherever they are and always dump their sewage tanks in the proper receptacles. “This country is beautiful, and its just astonishing how much trash there is,” Minard said.

The couple travels in separate RVs which may seem curious to some, but Minard and Rodwill don’t seem to make much of it. 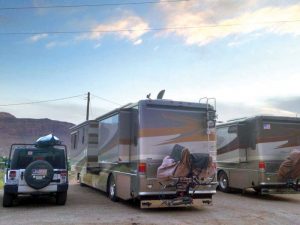 Karen Minard’s coach and Jeep at left and Dan Rodwill’s coach at right.

“The way we see it, if we owned a house we would be spending the same money on something else,” said Rodwill. “We don’t have a mortgage or expensive homeowner’s insurance or utility bills, so it about evens out.”

A few weeks ago the couple traveled through Salisbury and while looking for remains of the Civil War prison, met one of the fixtures of the city and part of what makes Salisbury, Salisbury — Clyde.

The local artist and historian found the couple wandering his property and told them about the final chapter of the prison and how it was burned down during Stoneman’s Raid. “After he told us about the prison, we went back to his studio and talked for close to an hour. The next day we looked around the Transportation Museum, and went back to talk with Clyde for another hour.” Minard said.

Clyde’s kindness and friendliness made an impression on the couple, who continue to correspond with the Salisbury native. “Salisbury was just great and if we ever come back that way we’ll have to stop in,” Minard said.

In regards to the future, Rodwill said, “You could do this your entire life and not see everything. Every state and every city has something unique and I just hope we can continue to do this for another 10 to 15 years.”

“We just have the best life, and if we are ever unhappy, we just turn the key and go somewhere else.” said Minard.