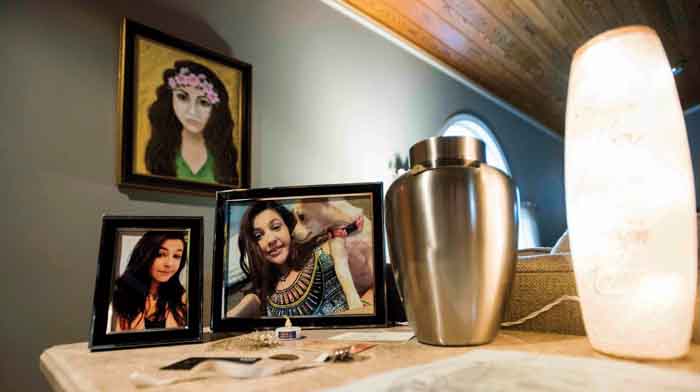 JON C. LAKEY / SALISBURY POST An urn containing the cremated remains of Taylor sits on a table with personal items and photographs. Amy Morris, the adoptive mother of Taylor Elizabeth Miller, describes the turmoil she and her family as endured dealing with the drug addiction of Taylor that eventually lead to her death due to Heroin overdose 7 months ago in November of 2017. Monday, July 2, 2018, in Salisbury, N.C.

Second in a two-part series

SALISBURY — As she did many nights, Amy Morris texted her 19-year-old daughter, Taylor Miller, before she went to bed on Nov. 25.

Amy fell asleep waiting for a reply, only to be awakened at 3 a.m. by what she describes as hammering on the back door. She remembered that she hadn’t heard back from Taylor.

“I got to the end of the hall and saw the blue light.”

Three Salisbury police officers were at the door, and one asked if she and husband Rick were Taylor Miller’s parents. The officers advised them to get in touch with Kannapolis Police.

A Kannapolis officer told Rick that Taylor had been found dead in a room at the Center Motel. Several syringes were on a table and in the trash can.

About 30 people were killed by heroin, fentanyl, Oxycontin and other opioids in Rowan County in 2017, and hundreds more were treated for overdoses. Headlines about the epidemic peaked last summer after fentanyl caused a string deaths and a young couple overdosed on a downtown sidewalk, with their child in a pickup nearby.

Opiates continue to run like a river through Rowan, though, and addiction touches thousands of families.

That’s why Amy is sharing Taylor’s story — to spur other parents to fight hard to save their children’s lives.

After getting Taylor’s phone and reading her texts and messages, Amy says she knows her daughter went out that night expecting to buy China White, a potent form of heroin. But illicit drugs can contain just about anything.

Kids naively think of  dealers as their friends, Amy says.

“These people do not care about you,” she says. If you overdosed in their car, she says, they’d push you out and drive on.

Or abandon you in a motel room.

A small memorial to Taylor in the Morris’ den includes smiling photos, a bejeweled hair comb, the pacifier holder Taylor used as a toddler — along with her death certificate and an urn holding her ashes.

Cause of death: acute cocaine, heroin, fentanyl and acetylfentanyl intoxication.

The family knew Taylor struggled with addiction; she’d been hospitalized after an overdose earlier in the year. But she had gone through treatment and was doing better, Amy thought.

“When someone gets that bad, they’re very good at manipulating it and hiding it,” he says.

He could tell that Taylor wanted to get away from heroin.

“We had many conversations about it,” Eddie says. “There was never any real help … You can’t just walk to the hospital and say, ‘I’m a heroin user and I need help.’ There’s something that needs to be done.”

The family believes the man who took Taylor to the motel provided the drugs that killed her — and should be charged in her death.

Eddie didn’t wait for police to investigate. He talked to people who knew Taylor, figured out who the man was, got his number and called him.

“He admitted to leaving her there,” Eddie says. “He said he thought she was fine because she’s been doing it for awhile.”

The man denied supplying the lethal drugs, Eddie says. He reportedly said that a message he’d left Taylor about bringing her “1g” referred to marijuana, not heroin.

Eddie turned the information over to police, who brought the man in for questioning twice.

“We weren’t able to develop probable cause,” says Lt. Chris Hill of the Kannapolis Police Department. “At the end of the day, it comes down to what you can prove.”

Some prosecutors are willing to go after suspects like the man who was with Taylor, Ramsey says, but charging someone in a death like hers is a challenge. “How do you prove the drug came from that person?”

Ramsey says investigators know exactly who provided a fatal dose of meth to young Rowan woman killed a few years ago, but there was a gap of time between when she got the meth from the suspect and when she died. Someone could argue that the woman already had other drugs with her. So no one was charged.

Black tar heroin dominated here for a while, but Ramsey says white powder heroin — like the China White that Taylor sought — has moved in. Most of it comes from Mexico, by way of metro Charlotte, and it’s often laced with the more potent fentanyl.

Meth may be the most prevalent illicit drug in Rowan now, Ramsey says, but heroin is right there with it. “Those drugs are like brothers and sisters.”

The Rev. Garland Faw officiated at the small family service for Taylor at Summersett Funeral Home Chapel a week after her death.

“God doesn’t turn away the addicts,” Rick says. “God was tired of her living that way. He called her home.”

Faw says he has officiated at the funerals of other people who have overdosed, but not many. “It’s a very difficult thing to do, because in most cases this is something that slipped up on people.”

He describes Taylor as “a sweet girl, as precious as she could be,” but says she went down the wrong road.

“A lot of people loved her and tried to help her.”

A lot of “if only” thoughts have crossed Amy’s mind.

• If only the man with Taylor had called 911, first responders might have saved her with the overdose-reversing drug naloxone. He couldn’t be criminally charged just for getting an overdose victim help.

• If only the woman at the motel had taken action when she first saw Taylor unresponsive, might responders have been able to save her then?

• If only she herself had been more insistent, Amy thinks, would Taylor have stuck with recovery and sought more treatment?

• If only more long-term treatment facilities were available and affordable, Taylor might have had a better chance of overcoming her addiction. Detox was not enough.

Joining Facebook groups for mothers of overdose victims has been a big help, Amy says. They share their pain and find comfort in knowing they are not alone. They miss the children they lost — children who are gone yet always with them, always on their minds.

Amy and Rick were heading out of town to Holden Beach recently when they came upon three cars “parked weird” on the side of Stokes Ferry Road with some people standing around it, Amy says. From her seat in their SUV, Amy could see a young woman passed out in the driver’s seat with a baby crawling over her lap.

Amy told Rick to stop. She jumped out, opened the door of the young woman’s car, grabbed the baby and handed the child to one of the onlookers.

Does anybody have Narcan? she asked. No response.

Does anybody know how to do CPR? Again, no response.

They removed the woman from the car. For the first time since she learned it 30 years ago, Amy started CPR and stayed with it until first responders arrived and took over, she says.

After it was all over, Amy couldn’t believe what she’d done.