Other Voices: Wrong issues will be on November ballot 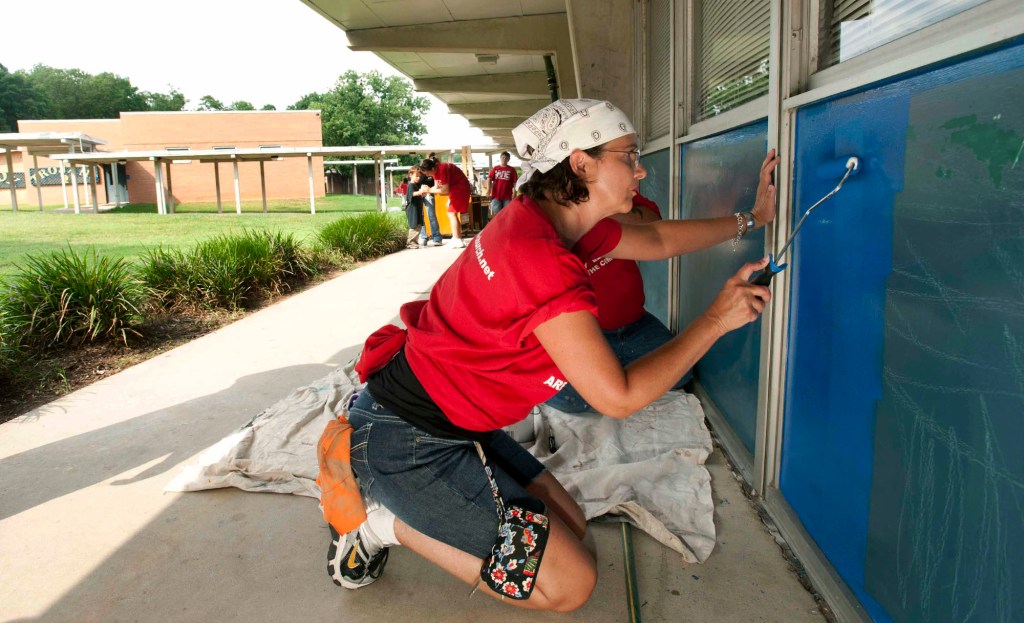 Volunteer Pam Abernathy helps spruce up Knox Middle School in 2014. The Rowan-Salisbury Board of Education has talked about replacing the school for years. File photo

The GOP supermajority in Raleigh has decided that it’s important to let voters decide in November on six changes to the state constitution.

Perhaps no priority is more important than enshrining North Carolinian’s right to hunt and fish in the constitution. That should put a stop to the hordes of angry protesters demanding that fishing be outlawed.

Other constitutional amendments on the ballot include extending the GOP-dominated legislature’s control over boards and commissions, demanding that voters present photo IDs, lowering the cap on state income tax rates, and expanding the rights of crime victims.

What’s not on the ballot is a school bond.

A 2016 study put the state’s school needs at more than $8 billion, and a new mandate to reduce class sizes for K-3 students has school systems scrambling to provide enough classrooms.

School systems in Brunswick, New Hanover and Pender counties are struggling to meet challenges posed by the region’s growth, our Cammie Bellamy reported recently. Nearly two dozen schools have opened in our three counties since 2000 to accommodate thousands of additional students.

While student population growth may slow some in the next few years as older families move into the region, pressure remains to open new classrooms and upgrade aging facilities.

In Southeastern North Carolina, Pender County is anticipating the fastest growth in student population, with another 2,000 students expected in 2025. That system is replacing an 82-year-old school in Penderlea and building two new schools in Surf City.

Local voters have shown support for school bonds. Pender and New Hanover voters passed bond issues in 2014 and Brunswick in 2016.

Local school officials had hoped to benefit from a $1.9 billion statewide bond, which would have sent money to each school district based on size, growth and economic need.

New Hanover Schools supported the drive for a bond vote by identifying $400 million in facility needs.

But alas, there will be no North Carolina school bond question on the ballot on Nov. 6.

When advocacy groups went to the Honorables last year to ask for that $1.9 billion bond, the proposal initially met with broad support, the Raleigh News & Observer reported, with both Republican and Democratic sponsors signing onto the bill filed in spring 2017.

But things have changed.

House Speaker Tim Moore told The Associated Press that some of his fellow GOP lawmakers worried about the state growing its debt after lawmakers agreed to issue up to $3 billion in new debt over 10 years for road improvements.

Of course, that money would be paid back through highway-dedicated revenues, but never mind.

Republicans also state proudly that the state is making more than $370 million in lottery proceeds available to school districts for construction needs. In other words, money from a state lottery set up to benefit schools is being spent on schools. Good on them.

We have no problem protecting crime victims and their families, and we’re all for hunting and fishing. We suspect those measures were put on the ballot to get Republicans out to the polls this fall, and it might work.

But it certainly says a lot about GOP priorities in the General Assembly that hunting, fishing and power grabs are worthy of voter attention, while our schools are not.