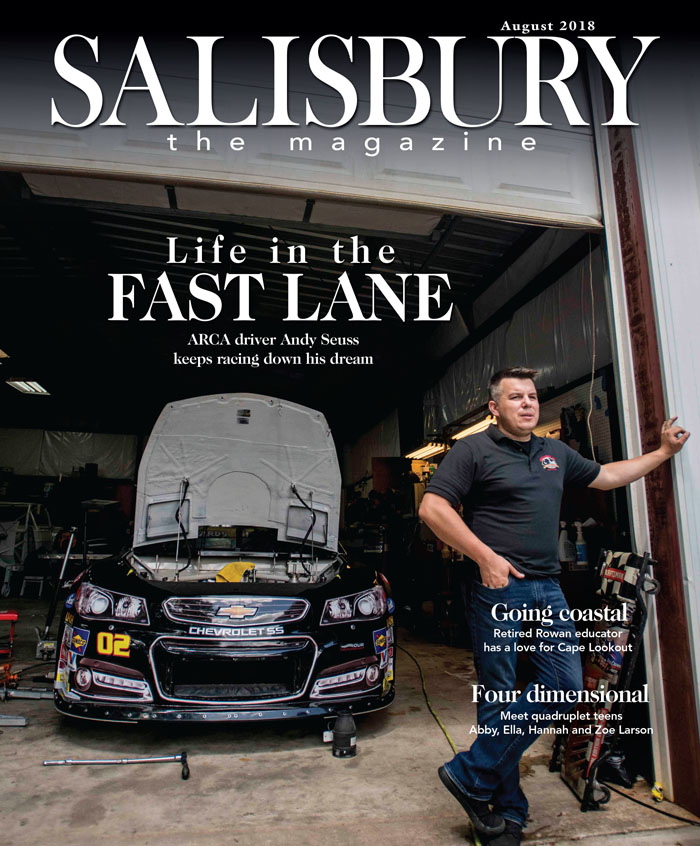 SALISBURY — The August issue of Salisbury the Magazine, a publication of the Salisbury Post, has reached subscribers and will be distributed throughout Rowan County this week.

Copies also are available at the circulation desk of the Salisbury Post, 131 W. Innes St.

The August cover features ARCA driver Andy Seuss, whose home and race shop are in Salisbury. The edition tells the story of how Seuss came South from his home in New Hampshire to pursue his racing dream, with help from his family and friends.

Other stories include a visit to the Cape Lookout Lighthouse with retired Rowan County educator Glenn Eagle, who has moved to the Crystal Coast so he can continue his volunteer work at the lighthouse.

The magazine also stops in at the home of Jerry and Tracy Larson, parents to 15-year-old quadruplets — Zoe, Hannah, Abby and Ella — who attend East Rowan High School.

In addition, this issue takes readers to Durham for a story on Salisbury native Laura Ritchie, who at a young age has left a considerable mark on the Triangle arts scene through a gallery she cofounded. Plus, she’s been host for the arts program “Muse” on public television.

August’s “Home” story revolves around the 20-year work of David Rowh, the man who directs the work crews on Habitat for Humanity houses.

Elsewhere, members of the Cleveland High Class of 1958 reunite and visit their old school building for a final time. The magazine also looks at the planning going on for the second “A ‘Bury Home Companion” show benefiting the Salisbury Symphony.

Steve Monday, a local weather expert, answers some questions as this issue’s Rowan Original. Dr. Jim Anderson provides the Through the Lens photograph. Andy Mooney supplied a pen-and-ink drawing for Salisbury’s the Place, and Bookish returns with three reading recommendations.

The magazine includes a local events calendar for August and “Scene” pictures from Pops at the Post, the Campbell Memorial Golf Classic, the symphony’s “Country and Wit” concert, Piedmont Players’ “Night on the Stage” and Families First-NC Inc.’s “Flip Flops and Flamingos.”