Time Was, Clyde: Make your name mean something 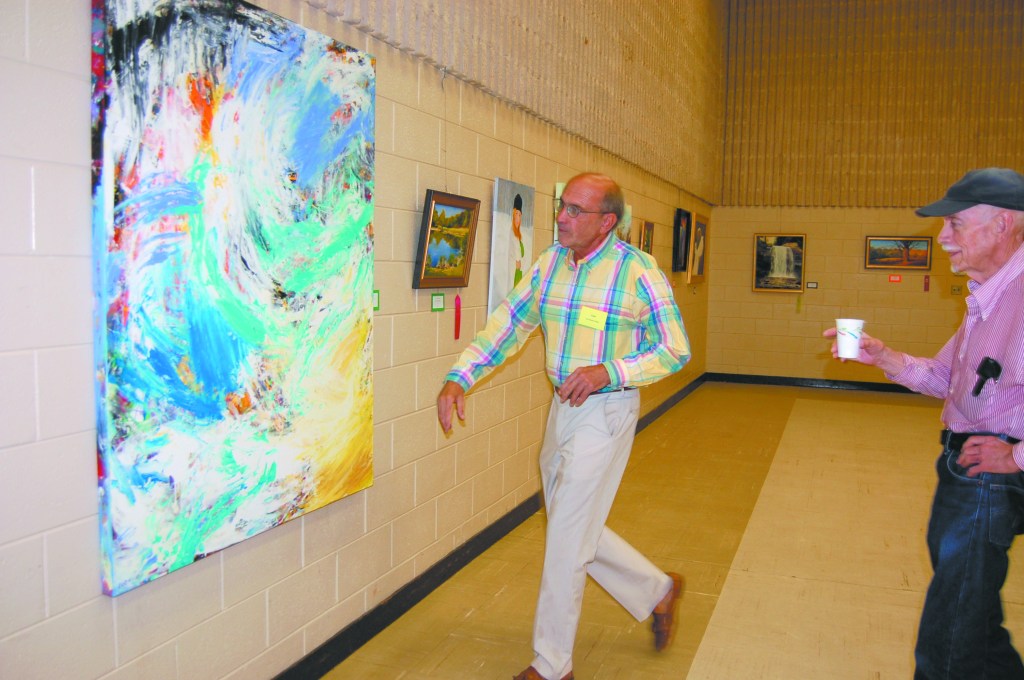 Clyde makes a point about one of his paintings at the 2014 Carolina Artists Expo.

Time was, we called people by their nicknames because of the way you looked— Slim, Tiny, Slick, Curly, String Bean, Walrus or Sky Hook. Rip because you tore your pants in school. Of course this was all before bullying and you just “went with it.”

Ekename, or “also name,” changed to nickname. Some were meaningful, like Precious, Worthy, Treasure or Blessed. Some were hippie names like Sky, Moon Unit, Mariah or Ivy. We sang the name game; bo-na-na fanna, fo-mana, fee, fi, mo-nana.

You could be named for your doctor when you were birthed or Junior for your elders.

Luke 1:59: “And they called him Zacharias after the name of his father.”

Rowan was from Mathew, the acting governor, when we cut from Anson County in 1753. Kings and queens kept their names in the family, until Ferdinand.

Some get elected on their name, Alvena.

Velveeta, Orongello and Linoleum were copies, do you think? We wrote about it. “A rose by any other…” Will. “My name is Ozymandias, king of kings, look on my works, ye mighty, and despair. Nothing beside remains.” Shelley.

We used rhyme and metaphor: Monica and Bianca for twins. Hosea and Hose B for fireman’s sons. For triplets: Essie Eulla, Bessie Beulah and Leslie Lula take the cake.

For Southern girls, Mary Dwayne, Kirbianna Sue, Polly Rose, Hope Ellen, and Sampsy Jo just fell off the porch with the fluted columns, and Bubba was there to catch them. Skeeter, Sparky, Toots, Boo, Rufus, Buck, Pickles, Honey Bunch, Tater, Coleslaw or Duke would not be on your Yankee list of baby names.

When you run out of ideas, pick a name out of the Bible to be safe. Daniel 1:7: “Under whom the prince of eunuchs gave names: … Belteshazzar, … Shadrach, … Meshach and … Abednego.”

We mold our lives around names, like it or not; we are labeled like a drink can or a beer can if you drink a lot.

“All I could never be, All men ignored in me, This I was worth to God, whose wheel the pitcher shaped. Ay, note that Potter’s wheel, that metaphor! and feel why time spins fast, why passive lies our clay …” — Robert Browning.

Make something of yourself. Leave your mark. Write your epitaph now. Some clay is wasted. Some becomes the most wonderful work of art, worshiped worldwide. Some blobs of clay are wasted and discarded.

We changed our names. Just one was enough for Cher, Madonna, Sting, Prince, Oprah. We all knew Ollie with the box, or cat or dog named Damit. MLK Sr. changed his name for the theologian.

Some names were just bad, even vulgar, but are still in the dictionary even though our editor would delete them in order to protect our citizens who themselves have given some bad nicknames to our city.

How can we get rid of a bad name? After the War between the States, T.J. Meroney, in order to clear his good name, ran an ad in the Watchman to dispel his association with General Stoneman, whose raiders spared the old courthouse here.

“In vindication of my character which I feel has been unjustly assailed, I feel it a duty which I owe to myself and the good people of Salisbury because of my kindness to paroled prisoners and that I harbored federal spies.”

Upon the altar hangings at church, we saw “I.H.S” which was Latin “in hoc signo,” translated as “with this sign.” They left off the “vinces” (conquer) used by murdering crusaders. Our Christian Reid used a pen name “nom de plume” to sell her novels. “Nom de guerre” were names to fight for.

We called people names. In Rome, a nomenclator was a slave who called out names.

Be careful who you call out. Facebook gives your enemies a written testimony to their credibility, admissible in a court of law. Think about the permanency, the damage, truthfulness and ethicality. You can’t erase the internet. So, just don’t forget your name. It goes with your face. One of many in the aeolian dust of time was.