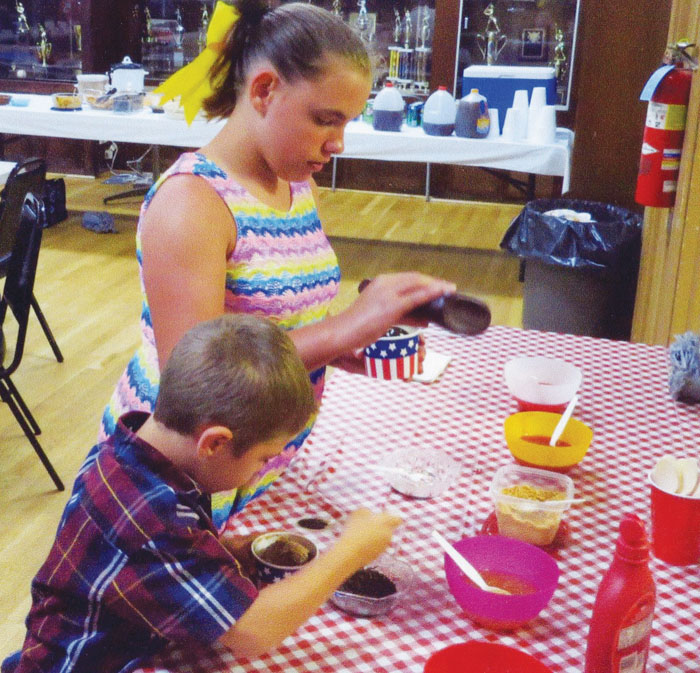 The theme of the July dance at Harold B. Jarrett Post 342 was an ice cream social, to celebrate the Fourth of July.

July 28: Conrad and Mary Sloop annual reunion
CHINA GROVE — To celebrate the 250th anniversary of the German settlement in Southern Rowan County, the descendants of Conrad and Mary Sloop will hold a reunion Saturday, July 28 at Lutheran Chapel Church, 135 Eudy Road. Registration is at 10 a.m., worship at 11 a.m., lunch at noon and a business meeting at 1 p.m. Bring a potluck lunch and beverage.
Anyone with the last name of Sloop/Schlup or who is a descendant of someone with the last name of Sloop/Schlup is welcome.
George Savitz’s 254-year-old German Bible will be used during the Eucharist and will be on display in the fellowship hall.

Honoring Korean War Veterans Aug. 11 at 5 p.m.
ROCKWELL — VFW Post 9134, 601 Depot St., is making plans to show its appreciation to Korean War Veterans by hosting a free fish fry dinner for the veterans and guests, on Saturday, Aug. 11 at 5 p.m. at the post.
RSVP by Aug. 6 to 704-433-4014 or email sgtjudd@gmail.com
Veterans are invited to bring photos. With questions, email sgtjudd@gmail.com
The VFW is a nonprofit veterans service organization composed of eligible veterans and military service members from the active, Guard and Reserve forces. The VFW and its auxiliaries are dedicated to veterans service, legislative advocacy and military and community service programs.

What do 1744 and today have in common?
By Bob Price, Post 342
pic Do you recall when the community event of the summer was the ice cream social? Harold B. Jarrett American Legion Post 342, Lincolnton Road, is trying to keep that tradition — which goes back to 1744 — alive. On the second Friday of each month the Post holds a dance which is open to the public and the theme for our July dance was an ice cream social, to celebrate the Fourth of July.
The dancers, and some spectators, ranged from some not yet in their teens to those of us who are 60+ years young.
When the dancers were not on the floor, there were snacks to eat, soft drinks and tea to wash them down, and plenty of ice cream. Without fear of contradiction we can say that everyone who attended had a great time, many asking when we were planning our next ice cream social.

Kneeling Gardeners
By Millie Fink
KANNAPOLIS — The Kneeling Gardeners held their monthly meeting June 25 at Trinity United Methodist Church on the topic of Pick a Plant, sponsored by members Judy Graeber, Anita Parker, Royce Thomason and Earl Gray.
Judy Graeber began her 2013 landscaping project with two raised beds and a single piece of red coleus in a ray of sunshine, surviving all odds the first year in her oriental garden. Judy saves and roots cuttings of this plant from year to year. Coleus have bright colored foliage all summer long. With the help of friends, she has been able to save her plants in the basement or garage, bay windows or sunroom through the winter. In closing, Judy stated she had learned the secret to rooting a schefflera plant. Prune from the new growth only and place in water until rooted. Never prune from the old wood.
Anita Parker’a presentation was on Growing Flowers on Eastwood. Anita grew up on Franklin, Va. and was familiar with the rooting and growing of azaleas and boxwoods since it was a hobby of her father’s. Her family’s backyard was filled with raised beds of cuttings of the plants and were moved out as they matured enough to be transplanted. After she married and moved to Kannapolis, her father brought boxwoods and azaleas to her new home and set them out. Along with the coral bell azaleas and boxwoods, she has scilla, Japanese iris, lantana, Dutch iris, and Mexican lily.
Royce Thomason brought a succulent plant that came from his mother, Edith, born in 1908. This particular plant has been around since 1950. Aunt Ruth and Uncle Earl moved to Arizona. When they came home they brought three tiny succulents. A succulent has fleshy tissue that conserves moisture and requires very little water. Some are green plants, some bloom and some have thorns. Royce held the plant up for us to see the long tendrils laid over the side of the pot. “Edith,” as his wife affectionately calls the plant, is a keepsake from the family and must be kept well out of reach of grandchildren.
Earl Gray spoke on the Genealogy of Plants and brought examples from each group. He began with the rose family which includes strawberries, apples, quince, spirea and knockout roses. Look at the bloom on a strawberry and notice the flower structure is the same as a rose. The lily family includes day lilies, onions, hyacinth, tulips and lily of the valley. The iris family is known as “the poor mans orchid” and is a native of France. Gladiolus is in this same family. Mollow family has varieties such as cotton, hollyhock and okra. Composite family has black-eyed Susan, asters, yarrow (yellow, red and white) and Shasta daisies. Night Shade varieties are Chinese lantern plant, potatoes and tomatoes. Mint is an herb and rosemary is known as the herb of love and is used in weddings. Lambs ear is used to help the blood clot. Lavender, sage, hyssop was used in the Bible for a remedy and will bring bees to the garden. If you have questions about plants, just ask Earl. He is a wealth of knowledge.
If you are interested in gardening, join us in Sept. 24 at 7 p.m. when Master Gardener Wendy Tate will be our speaker.