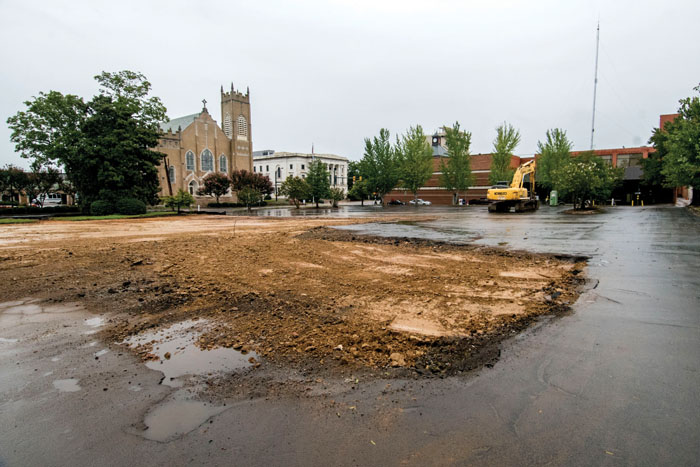 JON C. LAKEY / SALISBURY POST After two weeks of work, the former First Bank building was razed by demolition crews from D H Griffin in August 2017. The parking lots will close this week for more work to be done.

Significant projects are nearing the groundbreaking stage in downtown Salisbury, projects with the potential to transform the heart of the city. There will be growing pains, for sure, but the end result could open an exciting new chapter for downtown, a small part of Salisbury that has a big impact on its overall health.

On Monday, workers are scheduled to dig holes for soil testing in the 200 block of West Innes Street, the future home of the privately funded Bell Tower Green park. A nonprofit has been formed to get the park going; the project is expected to cost $7 million to $9 million, with the first phase of development taking about 18 months. It will be some time before trees, shrubs and garden paths will appear.

The work will have an immediate impact, though, as the property’s parking lots are blocked off starting Monday. The large lots look empty much of the time. In reality, downtown workers, churchgoers and library patrons — even school buses — use the spaces on a daily basis. City parking enforcement should exercise flexibility in the coming weeks as people adjust to this new reality.

Redevelopment of the Empire Hotel at 212-228 S. Main is the next potential game-changer, and this one has strings attached for the city. Black Point Investments plans 62 apartments for the upper floors and 28,000 square feet of commercial space below. The city is being asked to guarantee the lease on the commercial space for 10 years in case the tenant (unknown so far) is unable to fulfill it, a situation that could cost the city just under $160,000 a year.

No one likes to think about lease problems before the project even gets started, but financing projects like this is difficult. Considering the tax value of the building could go from $1 million now to as much as $17 million when the project is complete, the lease guarantee does not seem onerous. The city can’t let the opportunity to revive this major downtown structure slip away.

The third project is the development of the space across from the Gateway Building in the 200 block of East Innes. Healthcare Management Consultants plans to relocate its offices to the first floor of a new structure to be built there; apartments would be above it. The council wisely OK’d incentives for the project that could total as much as $142,204. People questioned the affordability of the apartments during a hearing; perhaps new awareness of the grants will draw more people to invest in downtown apartments.

Meanwhile, work has already begun on Michael and Diane Young’s O.O. Rufty project on East Innes, which will include six apartments, one retail space and mini storage units in the basement.

These projects will draw more people and activities to the central business district. Salisbury has long been proud of its historic downtown; these new projects will help the area thrive.