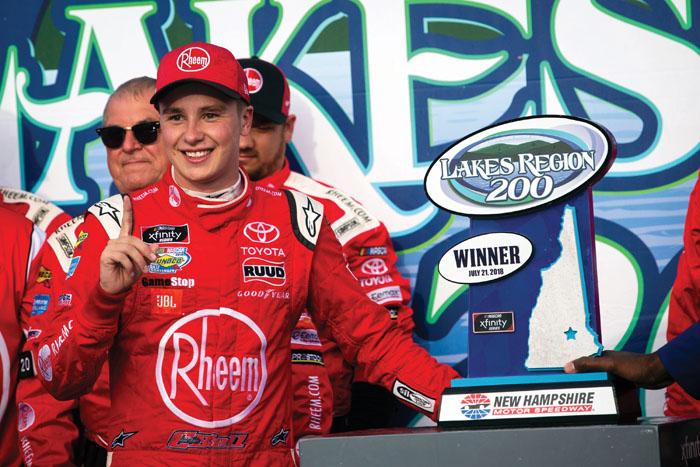 Bell pulled off the towering achievement of winning two straight Xfinity races against former champs from NASCAR’s top-tier series who moonlight on Saturdays. Bell topped 2015 Cup champion Kyle Busch to win last week’s race at Kentucky Speedway and he followed up Saturday in the No. 20 Toyota by keeping Keselowski at bay down the stretch for his third win this season.

“You hope to race those guys at one point, so I’m thankful that I get the opportunity here in the Xfinity Series to race with them and proud that I’m able to compete with them, let alone beat them,” Bell said.

Keselowski had won the pole Saturday but was dropped to the rear of the field because he was late to the mandatory drivers meeting. It proved to be nothing more than a mild inconvenience for Keselowski in the No. 22 Ford. He stormed past the second-tier regulars and had his fourth straight Xfinity win in sight.

Bell, who drives for Joe Gibbs Racing, had the fresh tires that Keselowski needed and that was enough to ring in a victory lane celebration. Bell gave his checkered flag to a young fan in the stands.

JGR fields cars for Busch and Bell, one reason it’s continued to have success in Xfinity.

“They’ve won before me, they’re going to win after me,” Bell said. “It’s my job to make sure they win with me.”

“You see all this crap going around the Internet that Cup guys shouldn’t be allowed in Xfinity,” Bell said. “Why?”

Because Xfinity is supposed to be the series where the stars of NASCAR’s future are discovered. Instead, they spent this season looking up at Cup regulars Busch, Keselowski, Kevin Harvick, Kyle Larson, Joey Logano, Ryan Blaney and Austin Dillon as race winners.

But Bell said he wanted them in Xfinity so he could race against the best drivers in NASCAR.

Busch led more than 100 laps last week at Kentucky before he faded late and Bell took advantage for the win. At New Hampshire, Bell was aided by four fresh tires down the stretch that helped make the difference.

Keselowski nipped at Bell’s bumper over the final three laps but could never reel him in for the decisive pass.

“I didn’t have any rear left tire,” Keselowski said. “I think we would have won today on four (tires) but that’s not the way it played out.”

Bell, the 2017 Truck Series champion, is certainly talented enough to find himself in a Cup ride the next few years. It’s just a matter of where he’ll fit in a series where top rides are scarce.

“Whenever you come to here, you step in this equipment at Joe Gibbs Racing, you’re expected to win,” he said. “Pressure’s on for you to deliver and thankfully I’ve been able to deliver, at least some of the time.”