After 50 years in banking, Millie Cress heads for retirement 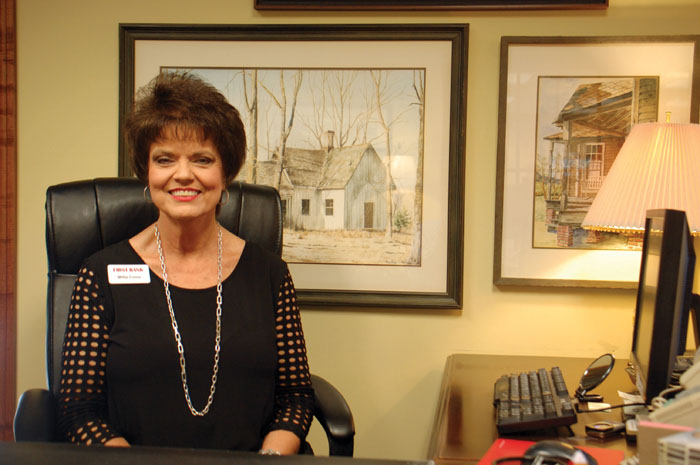 Mark Wineka/Salisbury Post Millie Cress, seen here in her office at First Bank, will be retiring July 31 after a 50-year career.

SALISBURY — Back in 1968, when Millie Cress started her banking career as a high-schooler, she was using a typewriter and rotary telephone.

Automatic tellers, fax machines, computers on every desktop and online banking were dreams for the future. Working in bookkeeping, Cress used an adding machine with a pull-down handle and was filing checks by hand.

“It was a good time, a simple time,” Cress said, “but you have to embrace change, because it’s a good thing, too.”

A big change lies in store for Cress, who after a half century in local banking, is retiring. Over 50 years, she has done everything from working the teller window, to writing loans, to being the longtime vice president and branch manager for First Bank in Salisbury.

Her last day will be July 31, the same day First Bank at 1525 Jake Alexander Blvd. will have its annual customer appreciation day from 11 a.m.-2 p.m., coupled with a catered celebration of Cress’ career.

These last days leading up to retirement have been full, as Cress is trying to pass on key information and the wisdom of 50 years to the next branch manager.

Over her years, Cress has essentially worked for three banking companies in Cabarrus and Rowan counties, though names of the various banks have changed occasionally thanks to mergers and buyouts.

At one time or the other, those names have been Cabarrus Bank & Trust, Northwestern, First Union, C.K. Federal, SouthTrust and First Bank.

She was among the staff who established the SouthTrust branch on the corner of Jake Alexander Boulevard and Brenner Avenue (in front of Harris Teeter). That bank is now a Wells Fargo.

In 1999, she also was the person to head First Bank’s first Salisbury branch at the corner of Jake Alexander Boulevard and Old Concord Road. That branch started out in a small house before the present building was constructed in 2005.

She is current president of the rescue squad board.

“I had a meeting last night,” she said.

Otherwise, Cress is a voracious reader and flower gardener  —”I’m happiest when I’m on my John Deere Gator,” he said.

She also is devoted to family, including sister Shelby and brother Ronnie — “Oh, gosh, we’re close” — and her two stepchildren, granddaughters, nieces and nephews.

With all she has been involved in, Millie and her husband, Rodney, often are the hosts for gatherings at their barn in China Grove. It’s not unusual, for example, for their barn to be the meeting place for family reunions, their Sunday School class, the Altrusa Club or Rotary Club.

“I love seeing people have a good time,” Millie said. “It’s all about making memories.”

Cress grew up in Kannapolis. Both of her parents, Therrel and Aileen Walden, worked at Cannon Mills — her mom, the second shift; her dad, the third shift.

Looking back, Cress wonders how her parents did it. Somehow her mother always had the kids’ meals prepared for the next day. Cress remembers lying in bed, smelling the comforting aromas of her mom’s cooking filtering through the house at night after Aileen returned home from the mill.

Her parents instilled in their children a strong work ethic and religious foundation, Cress said. The family lived in the Shadybrook area of Kannapolis. Cress attended Shadybrook Baptist Church and Shadybrook Elementary School .

“It was a good life,” she said. “… I can’t express what good parents they were. Mom and Dad encouraged us to do our best and be people of excellence.”

Cress was a self-described bookworm at A.L. Brown High School. She loved school and made the National Honor Society. Through a guidance counselor and the school’s cooperative education program, she landed a 1968 summer job at Cabarrus Bank and Trust Co. in Concord.

It came between her junior and senior years in high school, and the job continued through her senior year at Brown. She would attend classes in the morning, then work at the bank in the afternoon.

After graduation in 1969, Cress kept working with Cabarrus Bank & Trust and moved from retail teller to commercial teller. She stayed with Cabarrus Bank and its various incarnations until 1985, when CK Federal asked her to work in its accounting department.

SouthTrust bought out CK Federal, and Cress worked in customer service, then as branch manager for that new Salisbury SouthTrust until First Bank asked her to help establish its presence here in 1999.

Over time, Cress has taken business administration courses at Rowan-Cabarrus Community College while also completing programs through the American Institute of Banking.

She is a graduate of the four-year, mid-management executive program at the N.C. School of Banking in Chapel Hill. But Cress stresses one thing:

“A lot of it has been on-the-job training,”  she said.

As for her civic involvement, Cress said, “if you live and work here, you need to be involved.” It also helped her to learn the community and know her customers. “I just thought it was our responsibility, our duty,” she said.

Cress said it opened a lot of doors for her and put her in tune with things going on in the county.

“It helped me to grow and to grow the branch,” she added.

Ann Walters at First Bank has been with Cress since 2000. Rodney Cress has been Millie’s biggest cheerleader, and her brother and sister “are my rock, too,” Millie said.

But she thinks all the success she has experienced started with the foundation given to her by Therrel and Aileen Walden.

“It’s been a great career for me,” Cress said. “I have no regrets, and I have a lot of good memories.”