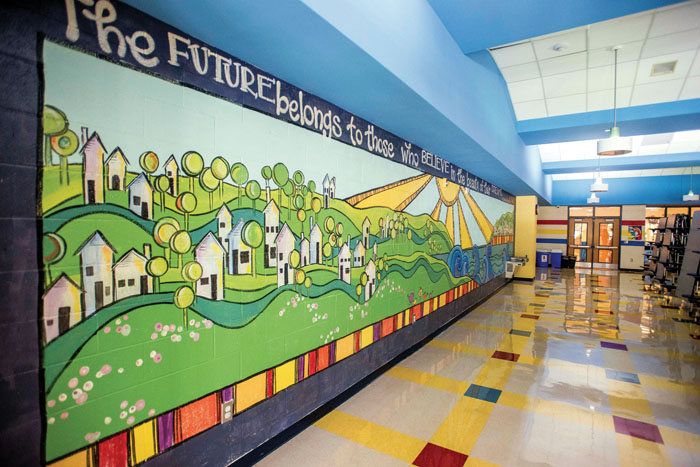 Every summer Abramson returns to the halls of the school to add more elements. JON C. LAKEY / SALISBURY POST 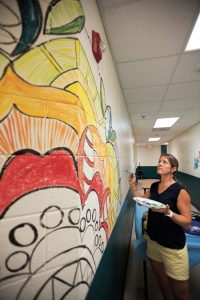 The two women have known each other since 1996, when Bondurant was part of the team that hired Abramson to teach art at Erwin Middle School. Abramson has since taught English at East Rowan High School and Rowan County Early College, and is now back at Erwin as an art teacher. Bondurant opened Shive 12 years ago as principal. This fall, she’s entering her 38th year in education.

Bondurant told Abramson of her school, “I want you to Whimziggy it up.”

Bondurant was referring to Whimziggy Art, a business that Abramson and fellow art teacher Emily Brinskelle began when their children were small. The two artists made jewelry, T-shirts, and children’s art, all in the whimsical, colorful, and bold Whimziggy style. They later painted driftwood signs, small driftwood houses, and other repurposed art. Brinskelle moved to Burlington four years ago, but she and Abramson still collaborate occasionally.

Which is why Bondurant asked Abramson to brighten up her school.

Thus far, Abramson has painted a circular half-wall in the media center just below the skylights, and a large wall in the cafeteria. This summer, she’s worked in four different areas of the hallways.

“Every year has been so much fun,” she says.

This summer, she’s painted a mandala-inspired design on one wall in her trademark bright colors. There just happened to be a fire extinguisher on that wall. It quickly became part of the artwork, serving as a birdhouse for a family of Whimziggy birds. Before getting started, Abramson walked the halls with Bondurant and Scotty Adcock, assistant principal, who thought the fire extinguisher would make a perfect birdhouse.

The wall also includes one of several quotes around campus Bondurant chose: “Just be yourself. Let people see the real, imperfect, flawed, quirky, weird, beautiful, and magical person that you are.”

A cafeteria mural includes the quote from Eleanor Roosevelt, “The future belongs to those who believe in the beauty of their dreams.”

In the media center, Abramson painted birds, bees, flowers, and words and phrases on the circular wall including, “love,” “inspire,” “create,” “have fun,” “encourage,” “read,” “shine,” “say thank you” and “cooperate.”

Bondurant has worked hard to make Shive a place that students and teachers alike will feel at home and comfortable.

“The staff and I spend a lot of time here,” Bondurant notes. “We want to make our school safe, clean, and inviting. I want to get rid of that institutional look.”

It’s a great conversation starter,” Callahan says of the artwork. “The kids have oohed and aahed over it. They’re proud to show it to parents. It just adds so much character and life to the school. Shive is such a wonderful school. It’s a home, and this artwork is just icing on the cake. We’re so proud of Meredith’s work.”

“This artwork makes our school a happier place,” she says. “There is just a warm, homey feeling here. The kids are comfortable. They want to spend time in the media center. Our cafeteria is not boring. It’s like going into a nice restaurant.”

Bondurant especially likes Roosevelt’s quote that’s on the wall there.

The confusing mystery of the Lost Colony