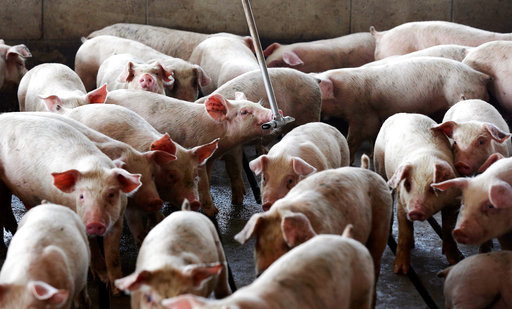 Young hogs owned by Smithfield Foods gather around a water source at a farm in Farmville in June 2017. (AP Photo/Gerry Broome)

As a young boy I would sometimes walk out of my Greenville home and smell rotten eggs. My mother explained this smell came from the paper mill in Plymouth, some 40 air miles away.

The same could be said about smells near Canton, Roanoke Rapids or around the pulp mill in New Bern. Other smells like tobacco being processed, smoke from power plants and odors from fish houses, fertilizer plants and facilities could be noted. We may not like them but we have traditionally recognized a benefit beyond the odor.

That hasn’t been the case with animal agriculture.

Raising turkeys, chickens and pigs is a smelly business and, while there has been much research done and action taken, we need better methods for controlling waste and odors.

What we don’t need are outside influences exacerbating the problems. Many of the lawsuits and much of the rhetoric behind media stories, environmental protests and “nuisance lawsuits”comes from out-of-state lawyers and interest groups.

Let’s talk turkey, to use a bad pun. Pork production in North Carolina is big business, involving 46,000 people in the production chain. Pork generates an economic impact of some $9 billion, including millions in tax revenues to fund our cities, counties and state government. North Carolina is second in the nation in pork production, with some 8.9 million hogs raised each year.

Consider the recent $50 million jury verdict against Smithfield Foods. Plaintiffs complained that the smells were so bad as to limit their outdoor access, that open waste lagoons attracted buzzards and flies and that trucks of dead animals passed their homes day and night. That award got plenty of media play but will be dramatically reduced because of North Carolina law.

While Smithfield (like other processors) owns the pigs, furnishes the feed and even provides the transportation for them, the work in growing the hogs is performed by local farmers who sign contracts to “grow out” the animals. Most of them are small family farms, and much of their annual livelihood is earned from these contracts.

The CEO of Smithfield Foods recently told The Wall Street Journal that if more of these “nuisance lawsuits” succeed, Smithfield will have to revisit whether they can continue to do business in North Carolina.

Was it a bluff? We don’t want to know, because everyone in our state would suffer disastrous affects if Smithfield left. Most contract farmers would likely go under. Local suppliers and businesses would see sharply reduced revenues and our cities, counties and state would lose tax income needed to run schools, maintain roads and keep our state operating.

Not to overreact, but the demise of our pork production industry would be “biting the hand that feeds us.” Agriculture is the No. 1 economic engine in our state and most of the counties where hogs are raised are barely hanging on. Just as we want to recruit industries bringing new jobs, we also need to do whatever we can to preserve jobs already here. We need all hands on deck.

Now is the time for our state leadership to calmly listen to all sides and work together for solutions that will avoid a potential crisis. For example, Smithfield agreed to adopt new technology in Missouri after a negotiated legal agreement. Perhaps a similar solution could be reached here in exchange for a moratorium on “nuisance lawsuits.”

Tom Campbell, former assistant state treasurer, is host of “NC SPIN,” a television discussion that airs on UNC-TV main channel Fridays at 7:30 p.m. and Sundays 12:30 p.m. Contact him at www.ncspin.com.

Cokie and Steven V. Roberts: Where are the patriots?