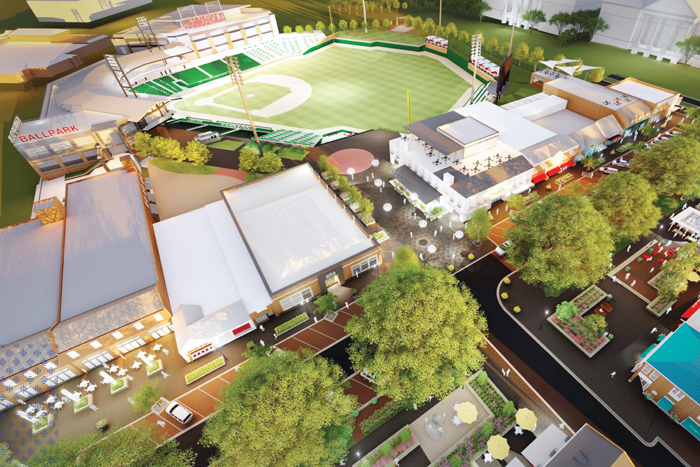 The Kannapolis budget for fiscal year 2019 contains many one time expenditures for its downtown revitalization, including streetscaping and the first debt service for a new, centrally located sports and entertainment venue. Submitted photo

KANNAPOLIS — As Charlotte continues to bubble over into surrounding areas, the city of Kannapolis is feeling the effects.

But the 2019 budget will lead to some increases for residents. The environmental fee will increase $3.75 per month, totaling $15.60 for recycling and trash collection.

The increase, according to City Manager Mike Legg, is meant to “subsidize a failing recycling products market” and “create a self-sustaining, user-funded service.”

Struggles in the recycling industry are caused largely by a new ban on recycling imports in China, said Legg, leading to cost increases that are no longer being covered by commodity revenue.

Residents will also see a $15 increase on their annual vehicle license fee, with a $30 total cost.

That increase is meant to pay for the costs of operating the Concord/Kannapolis Rider system and other transportation services: sidewalks, paving and other services, according to Annette Privette Keller, the city’s director of communications.

“We’re seeing an increase in people using public transit,” said Keller. “The light rail now comes to UNC Charlotte, so the Rider system will take people from Concord and Kannapolis down there.”

“We’re looking forward to seeing how many people will utilize it,” Keller said. “There are a lot of benefits of having that in place.”

Other items of note in the budget include:

• An additional 15 positions spread among most of the city’s departments.

These positions are set to be added in January pending additional information from the city manager to council members about staff salaries and the positions.

This includes first-year debt expenditures for a new sports and entertainment venue, the future home of the Kannapolis Intimidators. Keller said the project is currently out to bid, with a goal for completion in 2020.

The project also includes work on a new parking deck, continued work on streetscaping and infrastructure, and renovation of College Station.

Investments include a 2 percent market adjustment for salaries, up to 3 percent merit raises at hiring anniversaries and a career investment program.