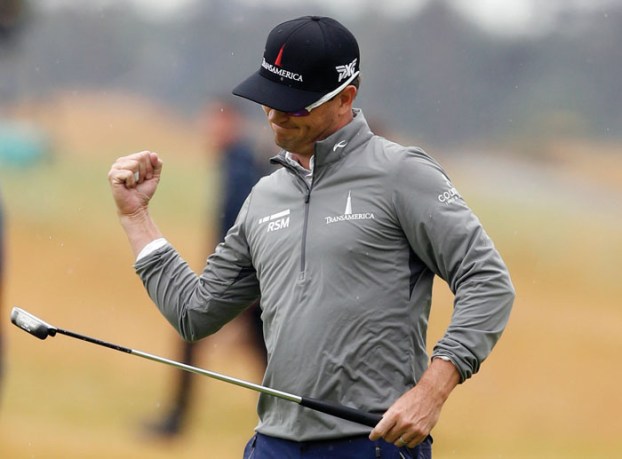 Zach Johnson of the US celebrates after putting on the 18th green during the second round of the British Open Golf Championship in Carnoustie, Scotland, Friday July 20, 2018. (AP Photo/Alastair Grant) 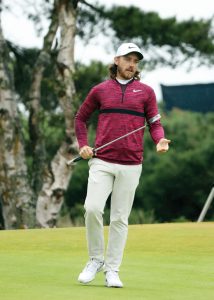 Tommy Fleetwood of England putts on the 13th green during the second round of the British Open Golf Championship in Carnoustie, Scotland, Friday July 20, 2018. (AP Photo/Peter Morrison)

CARNOUSTIE, Scotland (AP) — A light rain in the morning that gave way to soft sunlight in the afternoon took some of the sting out of Carnoustie.

Just not all of it.

Kevin Kisner found that out with one swing that erased his two-shot lead Friday in the British Open and left him tied with housemate Zach Johnson. He hit an 8-iron that only needed to go 150 yards to clear the Barry Burn in front of the 18th green. Instead, it floated out of the yellow grass to the right, bounced off the base of the rock wall that frames the winding stream and led to a double bogey.

Disappointed but not down, Kisner removed his cap behind the green and scratched his head as if he wondered what hit him.

“They call it ‘Car-nasty’ for a reason,” he said after signing for his 1-under 70. “Even when you think you’ve got it, it will jump up and bite you.”

It took a chunk out of Dustin Johnson and Justin Thomas, the Nos. 1 and 2 players in the world who won’t be around for the weekend. Johnson finished with a double bogey to miss the cut by one. Thomas made three straight double bogeys on the front nine and missed by one.

And it left a wide-open weekend on a course with a history of crazy finishes.

Zach Johnson, whose name already is on the claret jug from his playoff victory at St. Andrews three years ago, played in the morning under an umbrella and finished with a 30-foot birdie putt for a 67.

Johnson and Kisner are staying in a house of seven players — five of them major champions — and share the lead at 6-under 136.

They played on different ends of a day that started gray and ended with shadows. Scotland’s unusually dry summer finally got a reprieve. There wasn’t enough rain to turn brown fairways green, though it at least kept shots from rolling endlessly.

They head into a weekend with endless possibilities.

One shot behind were Tommy Fleetwood (65), Pat Perez (68) and Xander Schauffele (66). Perez was tied for the lead until he hit into a bunker on the 18th hole and took bogey. Rory McIlroy, pledging to “go down swinging” to rid himself of a bad Masters memory this year, had another 69 and was part of a large group two shots behind.

Jordan Spieth also is in the mix in his bid to take the claret jug back home to Texas. Spieth hit 8-iron through a gap in the trees for a birdie-birdie start to the back nine, and he dropped only one shot — not four like he did on Thursday — over the four closing holes at Carnoustie for a 67. He goes into the weekend just three shots back.

“Very happy to be back in the tournament,” Spieth said.

Tiger Woods still has work to do after a rugged start, good recovery and then a mix of birdies and bogeys that left him stuck in neutral on a better day for scoring. Woods had another 71 and was six shots behind, with 28 players between him and the lead.

“We’ve been fortunate with the conditions. It hasn’t blown yet,” Kisner said. “I think it will blow this weekend and make it even more difficult. Who knows what’s going to happen? We’re going to just keep trying to get after it.”

Carnoustie was a far different test from the opening round, when sunshine baked the fairways crisp and it was difficult to figure out how far the ball was going when it hit the ground. The steady, light rain made them a little slower and a lot more predictable. The greens held shots a little better. Strategies changed. Slightly softer conditions meant power players who were driving beyond the trouble hit more irons off the tee, and shorter players hit more drivers and fairway metals.

“Hit the same club as the approach,” Kisner said. “That’s a pretty dramatic difference in distance.”

Kisner is a newcomer to what amounts to an American fraternity house at golf’s oldest championship the last three years. Four of them are among the top 11 on the leaderboard going into the weekend with Spieth and Rickie Fowler, who shot 69 and was at 3-under 139.

As for talking shop after work? Nothing is off limits.

“Everybody will tell their horror stories and good stories, and we’ll laugh and eat a big old meal and sit around and watching something stupid,” Kisner said.

Thomas will have one of the horror stories.

The PGA champion took three to get out of a pot bunker from the fairway on the par-5 sixth hole, making the first of three straight double bogeys. Johnson became the first No. 1 player to miss the cut since Luke Donald in 2011, and it was the second straight that the top two players in the world ranking missed the cut in a major.

The way golf has been going, it would be reasonable to see the name “Johnson” atop the leaderboard and assume it belonged to the top-ranked player.

But not necessarily at the British Open.

Johnson overcame a bogey on the opening hole with birdies on the third and fourth holes, and he never put himself under too much pressure the rest of the way.

Already a two-time major champion with titles at St. Andrews and Augusta National, the 42-year-old from Iowa now has made the cut 12 straight times in the British Open, a streak that began at Carnoustie in 2007. His low ball flight, grinding nature and good putting give him the right ingredients.

Kisner is no stranger to pressure at a major. He had at least a share of the lead after each of three rounds at the PGA Championship last summer until a bogey on the 70th hole ruined his chances.

“Hopefully, I’ll have another chance to prove that I can do it here,” Kisner said.