Cespedes homers in return as Mets beat the Yankees 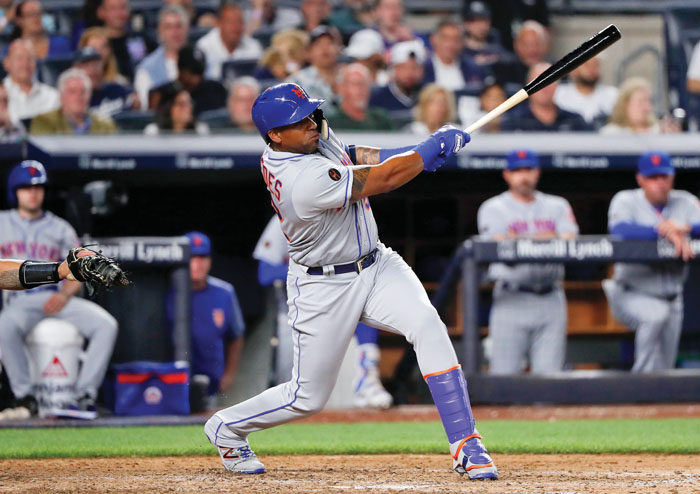 New York Mets' Yoenis Cespedes connects for a base hit against the New York Yankees during the sixth inning of a baseball game, Friday, July 20, 2018, in New York. (AP Photo/Julie Jacobson)

NEW YORK (AP) — Yoenis Cespedes homered in his return from the disabled list, Noah Syndergaard won his second straight start since coming back from an injury but left after a drop in velocity, and the New York Mets beat the Yankees 7-5 Friday night in a Subway Series opener.

Robert Gsellman pitched two innings for his fifth save as Mets closer Jeurys Familia sat in the bullpen. Manager Mickey Callaway said he was told mid-game not to use Familia because the team was close to trading him.

Cespedes had been out since May 13 with a strained right hip flexor, the latest in a string of lower body injuries that have limited him to 119 games in 1 ½ seasons since signing a $110 million, four-year contract.

He homered off an again ineffective Domingo German (2-6) to put the Mets ahead 4-0 in the third, sending a 3-0 pitch off the left-field foul pole. Cespedes is 8 for 10 with a pair of homers in his big league career on 3-0 counts. He also singled in the sixth — it would have driven in a run had Brandon Nimmo not been thrown out trying to stretch a double into a triple.

German was optioned to the minors after the game. He’ll be replaced in the rotation by Luis Cessa.

Syndergaard (6-1) returned just before the All-Star break after seven weeks on the disabled list caused by a strained right index finger. He allowed one run and eight hits in five innings, leaving after a velocity drop of about 2 mph in his final inning.

Callaway and a trainer came to the mound with one out in the fifth and looked at the finger, and Callaway and pitching coach Dave Eiland had a lengthy discussion with Syndergaard in the dugout after the inning. Callaway said after the game that Syndergaard was a little tired but his finger was fine.

Syndergaard has not had a 1-2-3 inning in any of his 10 innings since returning. His four strikeouts increased his total to 501 in 438 2/3 innings, and he bettered Dwight Gooden (445 1/3 innings) as the fastest Mets pitcher to 500 strikeouts.

Michael Conforto had three RBIs for the Mets, including an insurance run with a ninth-inning sacrifice fly off A.J. Cole.

Every Yankees starter had a hit, and they had a runner on in every inning but went 2 for 13 with runners in scoring position and stranded 14.

The Yankees dropped 5 1/2 games behind AL East-leading Boston, their biggest deficit since mid-April.

“I expect us to go out and be great,” manager Aaron Boone said before the game. “That’s kind of our expectation when we embarked on this season and that continues to be the expectation. And I think it’s a realistic expectation.”

Carpenter went 5 for 5 and drove in seven runs at Wrigley Field. He led off the game with a home run and was pulled after adding a three-run drive in the sixth. Carpenter became the 14th player with five extra-base hits in a game, and the first to do it for the Cardinals.

NL West-leading Los Angeles was held in check by Wade Miley before going ahead to stay in the seventh. Moments after Yasmani Grandal was cut down at the plate on a nice pickup by catcher Manny Pina, Taylor singled in Chase Utley to give the Dodgers a 2-1 lead. Machado’s second hit then set up Max Muncy’s run-scoring double off Taylor Williams (0-3).

Enrique Hernandez added a three-run homer in the ninth as Los Angeles celebrated the trade for Machado with its fifth win in six games. Rich Hill (3-4) struck out nine in six innings, and Kenley Jansen got three outs for his 28th save.

Milwaukee returned from the break to an emotional apology from reliever Josh Hader for years-old racist and homophobic tweets that surfaced during the All-Star Game.

Steve Pearce hit an RBI double in the first, and the Tigers could never match that one run. Detroit had the bases loaded and nobody out in the fourth but didn’t score.

Odubel Herrera added two RBIs for the surprising Phillies, who remained a half-game ahead of Atlanta for first in the NL East with their 13th win in 19 games.

ST. PETERSBURG, Fla. (AP) — Derek Dietrich homered twice, including a three-run shot in the seventh inning that broke a tie, to lead Dan Straily (4-4) and Miami over Tampa Bay.

Dietrich’s 13th homer came off left-hander Hoby Milner after two walks by Diego Castillo (1-1). Miami added two more runs in the inning with the help of a couple of errors to take a 6-1 lead.

TORONTO (AP) — Aledmys Diaz singled home the winning run in the bottom of the 10th inning and Toronto recovered after blowing a three-run lead in the ninth to beat Baltimore.

Diaz had four hits, including a solo homer, and scored twice as the Blue Jays improved to 7-1 against Baltimore.

Russell Martin hit a two-out single off left-hander Paul Fry (0-1) in the 10th and advanced to second when Randal Grichuk walked. Diaz followed with a grounder that ticked off the glove of third baseman Renato Nunez and eluded shortstop Tim Beckham, allowing Martin to score.

Duda’s two-out single in the first inning scored Whit Merrifield and Jorge Bonifacio. He then led off the sixth with his eighth homer down the right-field line off Kyle Gibson (4-7).

Duffy, who is 5-2 with a 2.58 ERA in his past 11 starts, limited the Twins to one run and five hits over seven innings. Duffy (6-8) picked up his first Kauffman Stadium victory since last Aug. 22.