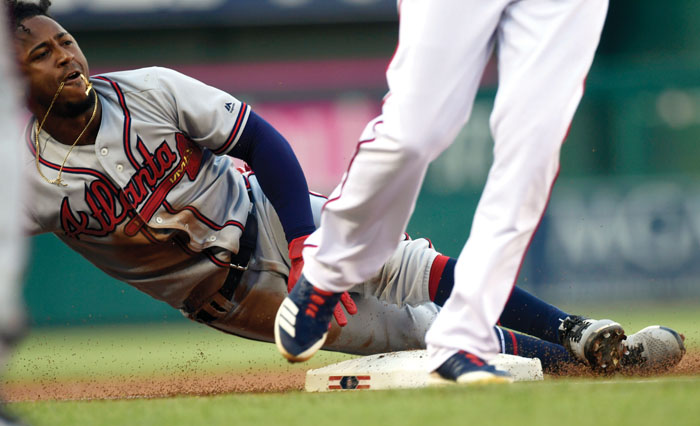 Atlanta Braves' Ozzie Albies steals third base during the first inning of a baseball game against the Washington Nationals at Nationals Park in Washington, Friday, July 20, 2018. Albies appeared to sustain an injury after doubling on the play and left the game. (AP Photo/Susan Walsh)

WASHINGTON (AP) — Stephen Strasburg was batted around by the Atlanta Braves, then engaged in a heated spat with Nationals ace Max Scherzer in the dugout during Washington’s 8-5 loss Friday night.

It was unclear what prompted the exchange between the star pitchers in their first game after the All-Star break.

The dispute occurred after Strasburg (6-7), activated from the 10-day disabled list earlier in the day and throwing on his 30th birthday, gave up six runs and eight hits in 4 2/3 innings. He walked into the dugout, got a pat on the back from Scherzer and sat down on the bench. They began barking at each other, then both quickly went off-camera by leaving the dugout.

The Braves lost All-Star second baseman Ozzie Albies in the third inning, and the team said he was lifted as a precaution because of right hamstring tightness. He had an RBI double and stole a base in a two-run first inning.

Anibal Sanchez (5-2) allowed three runs over six innings for the Braves, who started the second half near the top of the NL East.

Matt Adams, Trea Turner and Juan Soto homered for the Nationals, who hosted the All-Star Game Tuesday. Washington, which has lost six of nine, fell to 48-49 and six games behind Atlanta.

A.J. Minter pitched the ninth for his fifth save. The Braves entered the All-Star break having lost eight of 11. Atlanta is 7-4 against Washington this season.

Strasburg went on the DL on June 10 with right shoulder inflammation. He landed in trouble quickly in his return as the Braves scored two in the first inning.

Adams’ 16th home run of the season tied the score at 2 in the third, but Atlanta countered with a single run in the fourth. Freeman’s two-run double highlighted a three-run fifth that put the Braves up 6-2 and ended Strasburg’s outing. He struck out six and threw 98 pitches.

Braves: Manager Brian Snitker said he is leaning toward starting LHP Max Fried on Tuesday against Miami. Fried (middle finger blister), has been on the DL since July 6. He pitched 4 2/3 innings for Triple-A Gwinnett on Wednesday.

(strained right oblique) from the 60-day DL. He entered as a pinch-hitter and grounded out to end the sixth. . Closer Sean Doolittle (left toe inflammation) threw off the mound Friday for the first time since July 7.

Nationals: LHP Gio Gonzalez (6-6, 3.72) has dropped four consecutive decisions since a win at Baltimore on May 28.

Brewers’ Hader apologizes to his teammates for racist tweets