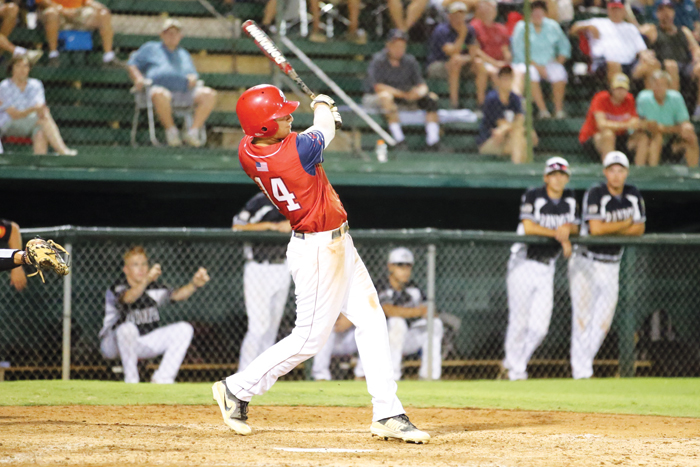 SALISBURY — “The Natural’s” Roy Hobbs is alive and well and playing under the assumed name of Wayne Mize.

At least it seemed that way Thursday night at Newman Park, where Mize slugged Rowan County to a 10-6 victory over Randolph County that squared the best-of-five Area III championship series at a game apiece.

“That’s the difference in the game right there,” coach Jim Gantt said, moments after Mize went 3-for-3 with a pair of cloud-scraping, three-run homers. “It was good to see. He’s got a good swing and he’s got power, no doubt. And when he stays in the middle of the field, his power plays in any part of this park.”

One night after managing only three singles in a Game 1 loss in Asheboro, Rowan (29-9) collected 10 hits — four for extra bases — while coaxing eight walks and three hit-batsmen against a quartet of Randolph pitchers.

“They took advantage of several situations,” Post 45 coach Ronnie Pugh said after Randolph (23-15) had its eight-game winning streak snapped. “This was sort of self-inflicted. You do that inning after inning and it’s just a matter of time.”

Mize, who hadn’t homered since June 17, wasted little time getting after the yard work. He crunched his first home run — and fourth of the season — in the bottom of the first inning against left-hander Trevor Marsh. Hayden Setzer opened with an opposite-field double to the base of the left-field wall and two groundouts later Chandler Lippard drew a walk. Mize stepped in and lifted a 1-0 pitch over the wall in deep right-center.

“In batting practice today, I was trying to keep my hands inside the ball and drive it to right field,” Mize said. “So I was thinking that way when I came up. It was a meatball pitch. He left it right out over the plate.”

Randolph returned fire against Rowan starter Daniel Durham with three runs in the top of the second inning and three more in the fourth. The cagey left-hander faltered after yielding run-scoring hits to Bryce Marsh and Landon Smith and was promptly replaced by Maddux Holshouser. Durham allowed eight hits and three earned runs in 3 2/3 innings, but trailed 6-3 when Gantt ended his night.

“Pitchers sometimes have days when they can’t find it,” said Rowan catcher Garrett Alewine. “He struggled a little.”

Holshouser, on the other hand, was brilliant. The cunning lefty induced an inning-ending flyout in the Randolph fourth, then retired the next eight Post 45 batters. “Maddux pitched really well,” Gantt said after Holshouser twirled three innings of hitless relief. “He’s been better in relief than as a starter. That’s why we moved him in there.”

Alewine filled in some of the blanks. “He just located every pitch well,” he said. “He hit his spots when he needed to, put it where he wanted it and did his job.”

Holshouser earned his third win in six decisions after Rowan tied the score 6-6 on Luke Barringer’s RBI-single in the bottom of the fifth and John Owen’s DP-groundout. Facing right-hander Dawson Painter an inning later, Trevor Atwood served a leadoff single into right field and moved to second when Lippard was walked. Up came Mize — the rising East Rowan junior who was benched last Saturday at Finch Field — who clobbered a 1-1 fastball into the balmy night air and over the distant wall in left-center.

“Really, I was just trying to move those runners over,” he said with a post-game grin. “But I figured (Painter) didn’t want to fall behind, so I was sitting on the fastball and just drove it. I felt it right off the bat.”

So did Painter. “A fastball that I put about belt-high,” he said. “It should have been at his knees, but it wasn’t and he got it.”

Gantt defended his decision to rest Mize in Game 3 of the High Point series. “Sometimes you’ve just got to get to another day,” Gantt said. “Wayne just needed to sit over there for a game, take a break and clear his mind. I think he adjusted some things at the plate today in BP and it paid off tonight.”

It paid off times two.

NOTES: Game 3 is scheduled tonight at McCrary Park. Setzer (5-1) will start for Rowan against Randolph’s Braxton Davis, a right-hander who pitched five innings of one-hit ball in a semifinal series-clinching victory against Kannapolis. … Mize also doubled, drew a walk and scored three times. He now has 30 RBIs, but still trails Lippard (45), Setzer (35) and Atwood (31) on the team list. His home runs were Rowan’s first in eight games. … Bryson Wagner earned his second save when he relieved Holshouser with two away in the top of the seventh. He retired Austin Curry on a game-ending flyout to Mize in left field.