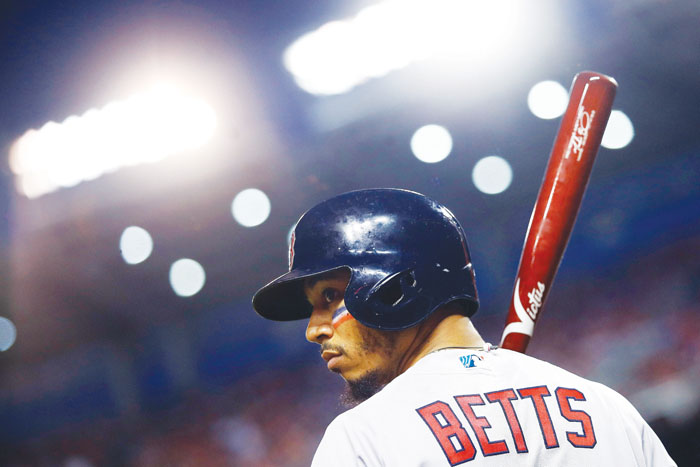 CHICAGO (AP) — Mookie Betts and the major league-leading Red Sox are on pace for 100-plus wins. Same for Aaron Judge and the Yankees, and the World Series champion Astros, too.

The Orioles, White Sox and Royals are on track to lose more than 100.

It’s the haves and the have-nots as baseball returns after the All-Star break.

“There’s a few good teams out there that they’re going to make it interesting in the second half,” Red Sox manager Alex Cora said. “That’s why you got to show up every day and keep playing. We had a great first part of the season, but that doesn’t guarantee us anything in October, going to October.”

The Dodgers know all about October, and they are a World Series contender once again. Especially with the addition of Manny Machado.

The NL West leaders got a head start on the July 31 non-waiver trade deadline by sending five prospects to Baltimore on Wednesday for Machado, an All-Star shortstop capable of powering Los Angeles to its first title in 30 years.

“Any time you have a chance to add an impact player in a tight division race that’s something you have to look at closely,” Dodgers general manager Farhan Zaidi said.

The Indians bolstered their bullpen by acquiring All-Star closer Brad Hand and rookie Adam Cimber in a trade with San Diego on Thursday, sending catching prospect Francisco Mejia to the rebuilding Padres.

Machado might be the biggest star to switch teams this month, but there will be plenty of players on the move.

“Starting pitching is always big during the trade deadline, whether it’s me or somebody else who’s having a good year,” deGrom said.

The Padres also could ship out relievers Kirby Yates and Craig Stammen. They are the only team out of the conversation in the NL West, where the Dodgers’ lead over fourth-place San Francisco is just four games. The Cubs have the best record in the National League after chasing Milwaukee for much of the first half, and the NL East looks like a three-team race.

Washington was supposed to be one of the haves this year, but it hasn’t worked out so far. The Nationals hit the break with a .500 record, looking up at the surprising Phillies and Braves.

But ace right-hander Stephen Strasburg, first baseman Ryan Zimmerman and closer Sean Doolittle are set to return from injuries, and it looked as if Bryce Harper regained some of his swagger with his win in the All-Star Home Run Derby in his home ballpark.

“We’ve got to battle,” Harper said. “I think the Braves are really good, the Phillies are good and those are two teams that are probably going to make some moves as well. Looking forward to the second half. Looking forward to do what we need to do.”

While the NL features three tight division races, there is nothing like the duel in the AL East, or the crowded AL West for that matter.

The Red Sox and Yankees have baseball’s best two records, and one of them very well could be headed for the wild-card game. The Astros are in prime position to become the first repeat World Series winner since the Yankees from 1998-2000, but any stumble and the Mariners or surging Athletics could push Jose Altuve and Co. into a more precarious spot.

“We need to win games and need to continue to push and put pressure on our division, put pressure on the rest of the American League,” Astros manager A.J. Hinch said. “We have to do what we’re capable of.”

There is a lot to love about Boston, too. Betts is making a case for the AL MVP award, and Chris Sale leads the strikeout-crazy majors with a whopping 188 Ks. The Red Sox also have received surprising contributions from All-Star first baseman Mitch Moreland and left-hander Eduardo Rodriguez.

Of course, the Yankees don’t look like they are going anywhere either, not with Judge anchoring a deep lineup and Luis Severino at the front of their rotation. Expect the AL East rivals to be on the hunt for help at the non-waiver deadline, desperately hoping to avoid that dicey wild-card matchup.

“One of the signs of a potentially great team is you’re not satisfied with anything you’ve done to this point,” Yankees manager Aaron Boone said. “A handful of guys have had really great years. There’s more guys in that room who certainly feel like they can be even better. That’s our expectation moving forward.”

SAN DIEGO (AP) — With an eye on October and beyond, the AL Central-leading Cleveland Indians scooped up All-Star closer Brad Hand and fellow reliever Adam Cimber from the rebuilding San Diego Padres in exchange for switch-hitting catching prospect Francisco Mejia.

The Indians need Hand, a lefty, and Cimber, a rookie right-handed sidearmer, to shore up a bullpen that has been without left-hander Andrew Miller since late May and has a 5.28 ERA, second-worst in the majors. The trade was announced Thursday, well ahead of the non-waiver trade deadline.

“Not just for this year, that’s kind of obvious, but having two controllable relievers, I just think it makes our organization healthier,” manager Terry Francona said Thursday night before a workout in Arlington, Texas, where the Indians start after the All-Star break. “We’ve got eight years’ worth of relief. That’s pretty exciting.”

Hand and Cimber were both expected to join the Indians before Friday night’s game against the Rangers.

Cleveland leads the AL Central by 7 ½ games over Minnesota. After losing Game 7 of the 2016 World Series to the Chicago Cubs, the Indians returned to the postseason last year but lost in the division series to the New York Yankees.

“We tried to have a really honest assessment, what are our strengths and what are the areas we can improve to help better position us to secure a postseason berth and advance once we get there,” Indians President Chris Antonetti said in a conference call.

“It sends a signal to the team that the front office is serious about winning this year,” said All-Star pitcher Trevor Bauer, who is set to start Friday night against the Rangers.

Miller, Cleveland’s two-time All-Star reliever, has been on the disabled list since May 26 with an inflamed right knee. He’s on a minor league rehab assignment and Francona said he’s had two good outings and is “on the right road,” though the manager didn’t offer a target date for his return.

Cody Allen has 20 saves in 21 chances for the Indians. Miller and Allen will be eligible for free agency after the season.

The Padres claimed Hand off waivers from Miami early in the 2016 season and he developed into a two-time All-Star. Known for his slider, he has 24 saves in 29 chances, with a 3.05 ERA and 65 strikeouts.

“Brad has established himself as an elite reliever over the last few seasons,” Antonetti said. “He adds both depth and experience to our bullpen and should have a big impact for us.”

Antonetti said the Indians have had an eye on Hand for more than a year.

Longtime Indians second baseman Jason Kipnis said the trade shows that “the front office still feels the same way we feel, that we’re a World Series-caliber team. … They’re in a win-now mode. They think our window is wide open, the same way the players feel.”

Hand was on the trading block last year but stayed put. Some teams felt San Diego was asking too much for the closer last year, when the Padres finished 71-91.

The Padres gave Hand a $19.75 million, three-year contract in the offseason, with a team option for 2021.

Francona said he wanted to meet with Hand and Cimber before deciding exactly how to use the new relievers.

“I want to get to know them, and get them involved as quickly as we can,” Francona said.

The Padres are last in the NL West, 14 ½ games behind Los Angeles. They haven’t had a winning season since 2010 or been in the playoffs since 2006.

They’ve been rebuilding since a win-now approach with high-priced veterans flopped badly in 2015. General manager A.J. Preller has built one of the strongest farm systems in baseball, but the big league team continues to flail despite getting its first infusion of young talent late in the 2016 season.

Mejia was batting .279 with seven home runs and 45 RBIs in 79 games for Triple-A Columbus. The 22-year-old made his big league debut on Sept. 1, playing in 11 games with Cleveland last year and one game this year.

Mejia can also play third base and outfield, but Preller said he’ll focus on catching at Triple-A El Paso.