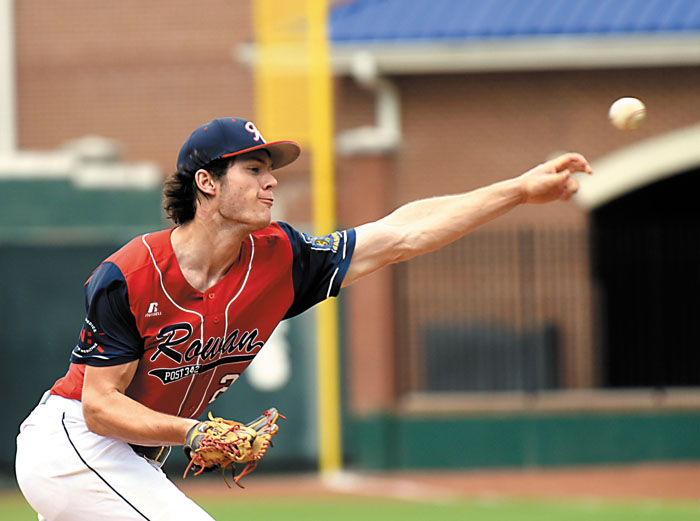 ASHEBORO — Wayne Mize continued to sizzle at the plate and Hayden Setzer pitched well enough to win most nights, but the Rowan County American Legion still fell to Randolph County at McCrary Park, 3-2, on Friday.

Rowan (29-10) trails the best-of-five Area III championship series two games to one and is a loss away from seeing its season ended. But it’s not over. Rowan was in the same predicament in the semifinal series with High Point and lived to swing another day.

There’s a chance of a thunderstorm tonight, but weather permitting, Rowan head coach Jim Gantt will hand the ball to ace John Owen (8-1 this season, 19-3 in his Legion career) and will ask him to extend the summer. First pitch is at Newman Park at 7 p.m.

If a Game 5 is needed, Rowan will have to return to McCrary Park. The winner of this series joins host High Point as the Area III representatives in the upcoming state tournament (July 26-30).

Setzer, a 6-foot-4 lefty who struck out seven and walked three, was overwhelming, at times. He struck out the side in the second and threw 62 of his 89 pitches for strikes on his way to a complete game. Rowan’s defense behind him was generally good with no errors in the official scorebook.

Mize went 2-for-2 to spark Rowan’s offense — again. The rising junior at East Rowan, one of Rowan’s younger players and the masher of two three-run homers on Thursday, has produced a marvelous series. He’s 6-for-8, plus several walks.

Mize put Rowan on top right away when his solid, two-out single in the first scored Trevor Atwood and staked Setzer to a 1-0 lead.

Setzer (5-2)  maintained that slim edge until the third, but that’s the inning in which he issued two of his three walks. No. 9 batter Blake Marsh drew a pass. Setzer promptly picked him off, but he evaded the tag at second base. When lead-off man Tristan Marsh also walked, Randolph had two on. The sacks were full after Setzer had no play on Dawson Painter’s perfect bunt.

That put Bryce Marsh, Randolph’s RBI leader at the plate for a critical at-bat, and he delivered. He attacked the first pitch and lined a singled to right to plate two runs. Those clutch RBIs were his 38th and 39th.

Rowan used a break to get back even at 2-all in the fifth. Setzer pulled a two-out single to right, advanced to second on a passed ball and scored when second baseman Austin Curry couldn’t corral Clayton Gilmore’s fly ball.

Rowan had a chance to take the lead in the sixth, mounting a threat when Mize singled and Luke Barringer walked. John Owen’s fly ball to right was deep enough for Mize to tag and move to third, and then Barringer stole second. But with wto men in scoring position, Randolph starting pitcher Braxton Davis, who struck out eight and walked three, secured his biggest out of the game — a strikeout of Bryson Wagner.

Randolph plated the decisive run in the bottom of the sixth. Cleanup man Trevor Marsh got his first hit of the series to open the inning, and Landon Smith jumped on a 1-0 pitch and lined a crisp double to left to score Marsh. Randolph threatened to get more runs, but Rowan right fielder Barringer gloved a fly ball and threw out Smith at the plate for an inning-ending double play.

Davis was still strong in the seventh, striking out C.P. Pyle and getting Setzer on a groundout. That pitch to Setzer was his 105th, and he reached the Legion pitch-count limit.

Painter made his way from center field to the mound at that point and was greeted by a single by Gilmore. That gave Atwood, one of Rowan’s top run-producers a chance to turn the tide, but he popped up a 2-and-2 pitch and first baseman Bryce Marsh made a running, over-the-shoulder catch in foul territory to give Post 45 the series lead.