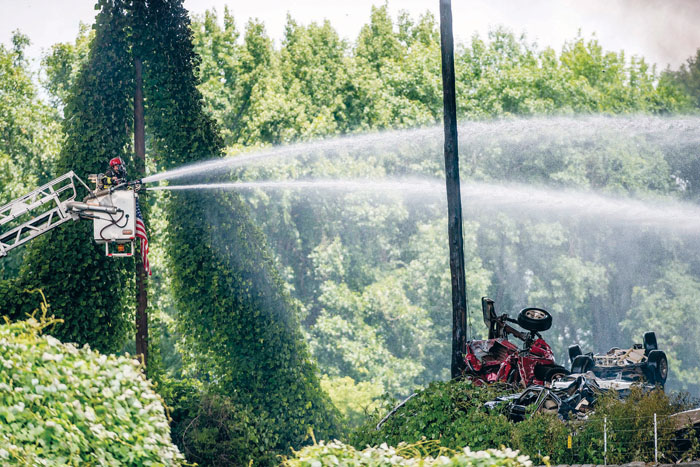 EAST SPENCER — Firefighters battling a raging fire at a salvage yard were hampered by an inadequate water supply, but town officials said Thursday that pending upgrades to the municipal water system should help resolve the problem.

McBride said his firefighters responded to the fire within about four minutes Wednesday and immediately knew they would need to call in extra help.

The fire was upgraded to a five-alarm, the highest level in this area, so that responders could use the tanker task force. The task force took water from nearby hydrants and poured it into drop tanks that fed water to engine and ladder trucks.

A crew from Norfolk Southern Railroad bored a hole underneath the railroad tracks nearby so fire crews did not have to put fire hoses over the tracks. The hoses connected to a hydrant behind the North Carolina Transportation Museum in Spencer.

As with a fire at the Dunbar Center in December 2014, McBride said there was a problem with water supply.

“Our water system couldn’t handle the amount of water needed,” he said.

The town is in the middle of a $2.4 million water project with construction of pipes that began late last year. A 2008 assessment determined that old, smaller water lines needed to be replaced with bigger pipes because they were leaking.

Mayor Barbara Mallett said the water project is complete but has not been put into service. All that is left is testing the system, she said.

The upgrades will provide two water sources — a line at Choate Road and one off Long Street.

“There will be a trunk line on Choate Road that will feed into East Spencer so that some of our problems will be eliminated,” Mallett said.

When the testing is done, the water system will be turned over to the town. The testing will include checking water pressure, how much is coming in and whether there is any infiltration from outside sources other than chlorinated water.

“We are just extremely proud of our staff, firefighters, Public Works, the Board of Aldermen, police, administrative and citizens. No lives were lost and no property, except within where it occurred,” Mallett said of the fire response.

Mallett said she’s thankful for the cooperation from all those who helped during the fire.

“We are extremely thankful to God and everybody pulling together,” she said.

McBride said firefighters knew early Wednesday that the town’s water system could not handle a fire of this magnitude.

“We knew we would need additional water. There’s no way the system could handle it,” he said.

Firefighters sprayed 3,000 to 4,000 gallons of water per minute to control the fire until it was extinguished.

The Rowan County Rescue Squad deployed a drone, which combined with feeds from news helicopters above the fire helped firefighters battle the flames.

He said the Dunbar Center fire prepared them for this caliber of emergency.

One of the main objectives in battling the fire was to make sure it stayed contained. McBride said the two areas that were in danger were a substation and other scrap piles.

Even after the fire was mostly contained, McBride said salvage yard co-owner Dwayne Holmes used an excavator to remove cars from the burned pile so firefighters could hose each one down. He said if not for Holmes removing the charred cars a few at a time, firefighters would have still been at the fire scene Thursday morning.

A Faith firefighter who injured his arm while removing a hose from a drop tank was treated at Novant Health Rowan Medical Center on Wednesday and released. McBride described the firefighter’s injury as minor. The only other firefighter injury was diabetes- and heat-related, he said.

The temperature combined with the heat of the fire was a concern for firefighters, he said.

Members of the Rowan Rescue Squad were set up to monitor firefighters.