College baseball: Catawba’s Ketchie gets his swagger back 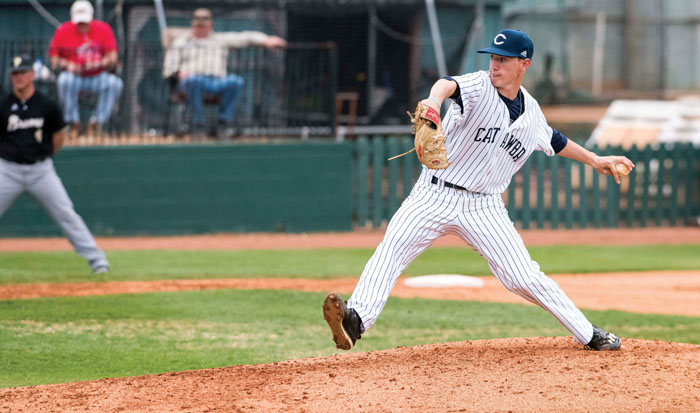 Left-hander Bryan Ketchie, a rising junior at Catawba College, had it for a long time, lost it, and now has regained it in New England with the Martha’s Vineyard Sharks.

On Wednesday, Ketchie was on a mound in Nashua, N.H., pitching in the  Futures Collegiate Baseball League all-star game. Throwing this summer against a mixture of Division I, Division II and junior college hitters swinging wood bats, Ketchie (4-0, 2.34 ERA) has been one of the best arms in a respected league. His last two starts — zero earned runs, 12 strikeouts, one walk in 11 innings — have been nothing short of brilliant.

The 20-year-old’s velocity is at an all-time high — and so his confidence.

“Right now, I’ve got all the confidence in the world,” Ketchie said. “I’ve just got to keep it. If I can keep my mind right, I can have a big junior season.”

Catawba is counting on him.

Ketchie came along during a period when there was serious talent in the pipeline at West Rowan High. He was able to learn his craft and hone his delivery and pickoff move for the West Rowan jayvees and the West Rowan Junior Legion team.

West didn’t need him on the varsity staff until he was a junior. After he finally arrived, Ketchie turned in two sharp seasons, going 11-5.

In his two summers with the Rowan County American Legion team, Ketchie was even better, with a 16-3 record and ERAs of 2.31 and 2,89. He won a game in the World Series against Nebraska, and it was Ketchie who was on the mound, in relief of John Owen, for the last five innings of the World Series championship game in Shelby. Ketchie finally took the loss against Arkansas in the 12th inning.

That game doesn’t haunt him. His memories of the World Series are positive. After all, he gave Rowan’s hitters a chance to win that epic game in the eighth, the ninth, the 10th and the 11th.

Gantt, of course, coaches Rowan Legion as well as Catawba, and was excited about signing Ketchie.

Ketchie’s freshman season for the Indians was a roller coaster. He started 14 times. His record was  7-2, but his 7.02 ERA was a little scary, as were the 16 homers he allowed in 59 innings.

The college game is much different than the Legion game at Newman Park. College hitters are bigger, stronger and smarter. They make more in-game adjustments, and they frequently make Newman Park look way too small. No one is surprised when a final score is 15-12.

His sophomore year, Ketchie only got six starts and was 1-1. He was healthy, but he pitched only 28 innings for the Indians all season, and his mound appearances grew less and less frequent as the season wore on.

“It’s easy to lose confidence as a pitcher at Newman Park with that center field wall 360 feet away,” Ketchie said. “And it seemed like the wind was blowing out every home game. More and more hitters are swinging with upper-cuts and a lot of routine-looking fly balls at Newman Park turn into home runs.”

Ketchie is not as tall (6 feet) or as big (170 pounds) as a lot of pitchers and has always been considered a finesse hurler, a lower-80s guy. But he had a startling experience at the end of his sophomore season.

“We all threw in the bullpen and they just told us to air it out, to  as hard as we could,” Ketchie said. “I touched 88 mph and threw consistently at 86.”

That velocity surprised even Ketchie.

The other positive thing that happened for Ketchie during his sophomore season was lining up a great summer job — with the Martha’s Vineyard Sharks.

“My Catawba teammate, Hunter Shepherd, played for the Sharks last year and had a great experience in New England,” Ketchie said.  “Hunter would tell us stories, and Jackson Raper (Catawba’s third baseman) and I got to talking about how crazy it would be to get to do something like that. We looked into it, and the Sharks were interested. They gave both of us a contract.”

The Sharks are at the top of the Futures League standings in large part due to the contributions of Ketchie, and Raper, who joined him in the all-star game. Ketchie, who pitches every six or seven days, has given his team six straight quality  starts, while Raper is batting .291 with 22 RBIs. Raper is second on the Sharks in RBIs.

“Jackson and I stay with different host families, but Martha’s Vineyard is a small island, so we’re not far apart,” Ketchie explained. “You can cover that whole island in about 30 minutes.”

Just south of Cape Cod, Martha’s Vineyard is mostly beaches and farms, plus a lot of historic lighthouses.

Since Ketchie and Raper live on an island, to get to their away games in Connecticut, New Hampshire and the Massachusetts mainland, they have to take a ferry boat, followed by a long bus ride. All the ferries have shut down by the time the Sharks are returning from a night road game, so they make their way home on a fishing boat.

So there have been travel adjustments, as well as the ones Ketchie is making on the bump.

“The key for me being successful is always going to be location,” Ketchie said. “But I’ve lowered my arm angle some, and I think that’s gotten my velocity up a little more. I’ve also been working on a cutter, I’ve made progress with it, and it’s been a really good pitch for me.”

The weather has been close to perfect, warm but not hot, and Ketchie has enjoyed the summer off the diamond as much as when he’s been on it.

“The downtown area here is cool and the beaches are a lot of fun,” Ketchie said. “There’s been plenty for us to do between baseball games. It’s been a very relaxing summer.”

School and Catawba’s fall baseball workouts, intra-squad games and scrimmages will be here before you know it. Catawba lost key senior pitchers such as Michael Elwell and Connor Johnson, so the opportunity is going to be there for Ketchie to re-establish himself as a key member of the rotation, to become one of the three starters for the weekend conference games next spring.

“That’s the goal,” Ketchie said. “I’ve gotten my confidence back this summer.”