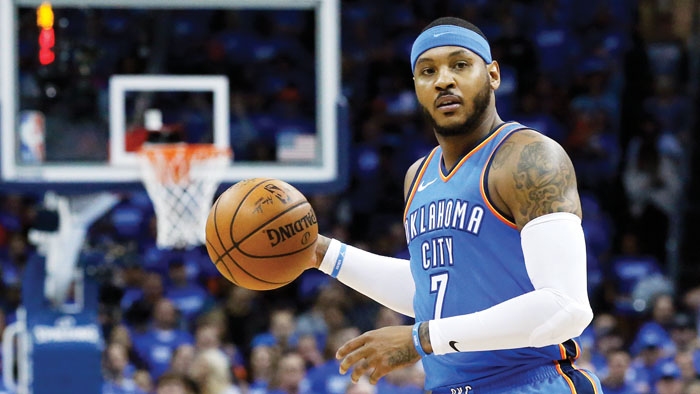 FILE - This is an April 25, 2018, file photo showing Oklahoma City Thunder forward Carmelo Anthony (7) during Game 5 of an NBA basketball first-round playoff series against the Utah Jazz, in Oklahoma City. Carmelo Anthony is done in Oklahoma City. A person with knowledge of the details tells The Associated Press the Thunder are sending the veteran NBA forward and a 2022 protected first-round pick to Atlanta in exchange for Hawks guard Dennis Schroder and Mike Muscala. (AP Photo/Sue Ogrocki, File)

A person with knowledge of the details told The Associated Press the Thunder are sending Anthony and a 2022 protected first-round pick to Atlanta in exchange for Hawks guard Dennis Schroder and Mike Muscala. Anthony will be waived by the Hawks, clearing the way for him to sign as a free agent elsewhere. The person spoke Thursday on the condition of anonymity because he was not authorized to discuss the situation publicly.

ESPN, which first reported the trade, said the Thunder will send Muscala to the Philadelphia 76ers for Timothe Luwawu-Cabarrot, and Philadelphia’s Justin Anderson will be sent to Atlanta.

Schroder, a speedy 6-foot-1 guard, averaged a career-high 19.4 points last season for the Hawks in 67 games, all starts.

Anthony’s lone season in Oklahoma City was largely a bust. He averaged 16.2 points and struggled at times in his new role alongside Russell Westbrook and Paul George. The 10-time All-Star posted career lows in scoring average and field goal percentage, and the Thunder were ousted in the first round of the playoffs by Utah.

The 34-year-old Anthony had been the headliner his entire career — he’s 19th in NBA history with 25,417 points — but he was more of a catch-and-shoot scorer last season instead of the isolation specialist he had always been. His playing time dwindled in the playoffs. In Game 6 of the first-round series against Utah that ended Oklahoma City’s season, he played fewer minutes than reserve Jerami Grant. After the season, he said he prefers to play with the ball in his hands more and said coming off the bench is “out of the question.”

Anthony opted in earlier this summer to accept the $28 million he was due next season. The Thunder re-signed Grant, then it was reported that Anthony and the Thunder would eventually part ways, though it was unclear how it would happen.

Schroder will likely fill a role for the Thunder similar to that of James Harden and Reggie Jackson in the past — explosive player who thrives as a lead scorer with the second unit. The Thunder are poised to be one of the best teams in the West after re-signing Paul George and Grant, adding center Nerlens Noel and Schroder and getting defensive stopper Andre Roberson back from a ruptured left patellar tendon that cost him the last three months of the season.

Schroder comes with some baggage. He was arrested in September following a fight at a hookah bar, an issue that has not been resolved. He was benched for most of the second half in a game during the 2016-17 season when he began arguing with Dwight Howard on the court, didn’t guard his man and gave up an easy basket. He was suspended for one game in 2017 when he returned late from the All-Star break. The Hawks at one point considered Schroder their future cornerstone, but they switched directions and drafted Oklahoma’s Trae Young in the first round of this year. The Hawks also added Brooklyn’s Jeremy Lin.