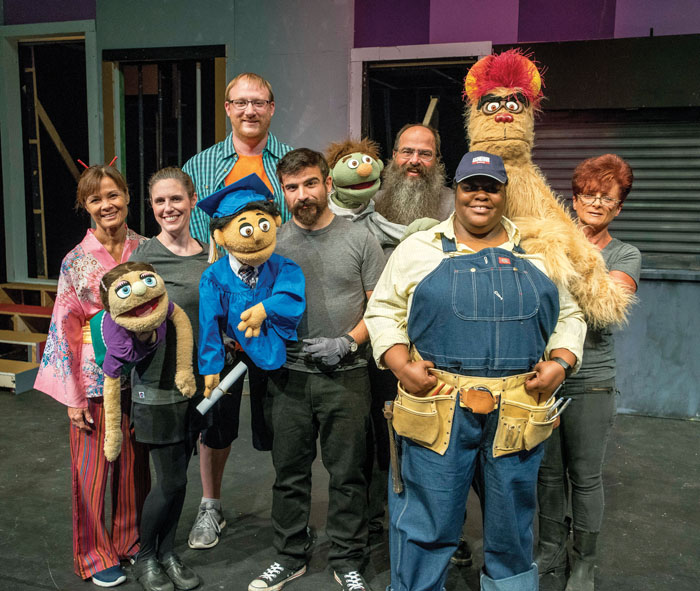 By Allison Wilhelm for PPT 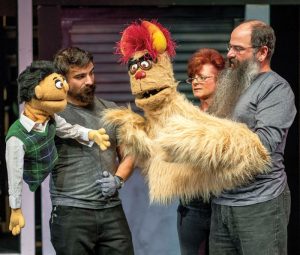 When you think of a puppet show, you might think of a show for kids and families — but “Avenue Q” is not your ordinary puppet show.
Billed as a “Sesame Street” for adults, puppets are used to depict the various problems facing young adults in today’s world, but unlike the famous TV show, “Avenue Q” is definitely not for children, as the characters and puppets are dealing with adult problems using adult language.

This laugh-out-loud musical tells the timeless story of a recent college grad named Princeton who moves into a shabby New York apartment all the way out on “Avenue Q.” His rent may be cheap but the neighborhood is rich in characters. Kate Monster, a kindergarten teaching assistant; Rod, an anal-retentive Republican banker; Nicky, Rod’s slacker roommate; Brian, an aspiring comedian; Christmas Eve, Brian’s Japanese fiancee and a therapist with no clients; Trekkie Monster, a surly recluse who surfs the Internet, and Gary Coleman, the building superintendent. While the puppets may look innocent and juvenile, they address outrageous, explicit content through many of the show’s tongue-in-cheek musical numbers, with titles including “What Do You Do with a B.A. In English?” and “Everyone’s a Little Bit Racist.” The show is known for the foul language and puppet intimacy, but it never really crosses the line to being crass.

“In some ways this is structured like a standard kid’s show with puppets,” says Reid Leonard, the show’s director and designer. “Except that it’s definitely not a kid’s show. The humor, plot and action are all very adult. These quirky characters may resemble those on children’s television, but they’re facing adult problems and singing songs about things like Schadenfreude, racism and job opportunities for English majors.”

The twists and turns of the story are hilariously played out by three real life actors and four actors/puppeteers who play a wide variety of characters. The show’s creators express that while the show stars puppets, the performance contains explicit language and mature themes and images and is not suitable for children. It is a satire, using puppets to explore the everyday problems of life.

The music and lyrics from “Avenue Q” were written by Robert Lopez and Jeff Marx, while the book was written by Jeff Whitty. If the name Robert Lopez sounds familiar, it is because he also co-created “The Book Of Mormon” and “Frozen.” The musical won three Tony awards: Best Score, Best Book, and Best Musical (beating out “Wicked” in 2004), two Theatre World Awards and was nominated for a Grammy award. Piedmont Players will open this Tony award-winning musical on Thursday, July 26 at The Norvell Theater.