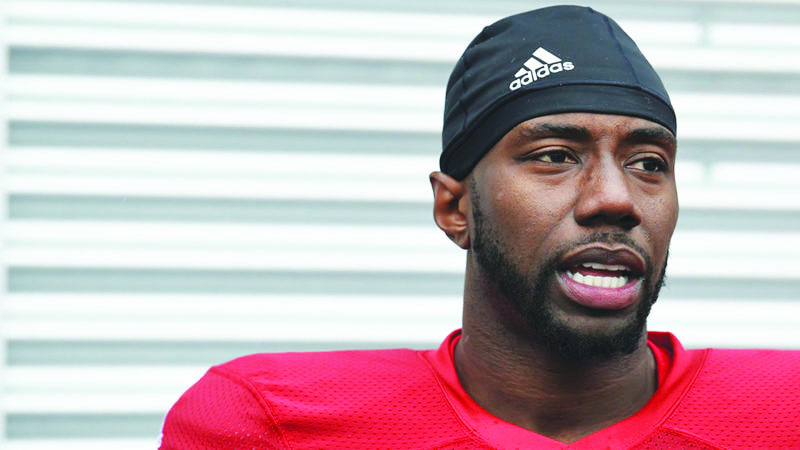 CALGARY — There are no fair catches in the Canadian Football League.

That’s one of the differences between the CFL and NFL rulebooks that isn’t common knowledge, but it’s a quirk that is well-suited to Calgary Stampeders speedster Romar Morris, who is always looking for that game-breaking return.

Morris made his debut in a CFL regular-season game last Thursday and returned nine punts for 104 yards as Calgary stomped Ottawa, 27-3. That sounds like a crazy workload, but the CFL game is furiously paced.

The faster the better for Morris, who won state championships as a sprinter in his days at Salisbury High.

“The no-fair-catch rule, it’s cool,” Morris explained. “They do have a 5-yard halo that protects you and gives you a chance to make the catch without being hit. The team showed a lot of faith in me to do a good job running back all those punts, and I came close to a few big ones. I was a shoestring tackle away from going all the way on one.”

Morris broke a 65-yard punt return in the preseason, so he’s capable of providing ESPN material.

Even the casual American football fan knows the major differences between the two leagues. Most are aware that Canadian Football is 12-man, three-down football, wide-open action with more passing and less power running. The playing field is bigger, both longer (110 yards) and wider, which again is right up Morris’ alley.  There’s more corner to turn, and no one turns the corner quite like Morris.

Since there are only three downs to gain 10 yards and since Calgary boasts, by far, the league’s best defensive unit, there could be many more punt returns in Morris’ future.

“With the three downs, you have to be on your toes all the time,” Morris said. “If we stop their first-down play, then the coaches are already calling for the punt return team to get ready.”

The CFL is only half Canadian now. Teams have 44-man rosters for games, with 20 “international players” (usually Americans) and 21 “national players” (Canadian citizens), plus three quarterbacks. The CFL still isn’t the NFL, but it’s becoming a faster, more athletic game every year.

Morris isn’t large (5-10, 190), but he’s muscular and about as athletic as it gets. As a prep sophomore in 2009, he was the MVP of the 2A state track and field championships and led Salisbury to the team title. As a junior in 2010, Salisbury’s team won again and Morris repeated as MVP. No doubt, it would have happened all again in 2011, but Morris went down with a senior-year hamstring injury, and the Hornets went down with him. It’s worth noting that in 2008, Morris’ freshman season, Salisbury didn’t score a single point in the state track meet, so he led a charge that put his program back on the map.

Besides the two track team championships, Morris won five individual titles and broke multiple 2A state records. He won the 100 and 200 twice each. In the middle of the 2010-11 basketball season, a sport in which his role was defensive stopper, he managed to get in three indoor track practices. Then he went out and won the 55 meters in the state meet.

In football, he did remarkable things. You can imagine what his blinding speed did to defenses once he got into space. There was no catching him from behind, obviously, and in the fall of his senior year, he rushed for 1,780 yards, still the school single-season record, and scored 30 touchdowns. Salisbury won the state — making it three team crowns for Morris. He was Central Carolina Conference Player of the Year as well as MVP of the mauling of Elizabeth City Northeastern in the 2AA  championship game in Winston-Salem.

Morris was the NCHSAA’s male athlete of the year for the 2010-11 school year. To put that award in perspective, those NCHSAA awards have been handed out since the 1985-86 school year. Morris is the only Rowan athlete — male or female — ever to win one.

Morris was a redshirt at the University of North Carolina in the fall of 2011. From 2012-15, he showed wheels and versatility, but he was never the main guy. Most of his 50 games for the Tar Heels were  quiet, with his greatest impact coming as a freshman and his fewest opportunities coming as a senior, not the trend anyone expected. There were always people ahead of him, whether it was Geovani Bernard, A.J. Blue, T.J. Logan or Elijah Hood. Morris had flashes of brilliance, some productive Saturdays, but he finished his four-year career with modest totals for a guy who could race 100 meters  in 10.4 seconds —  1,024 rushing yards, 499 receiving yards, 14 TDs.

Morris has knocked on the door of professional opportunity steadily since his days in Chapel Hill. While he wasn’t drafted by the NFL, his speed got him a shot in the New York Jets camp in 2016. A shoulder injury stopped him there. He was placed on injured reserve. He was technically a member of the Jets for more than a year, but then they cut him when the 2017 season started.

In September, 2017, Morris resurfaced in Canada, as a member of the 10-man practice squad of the CFL’s Toronto Argonauts. He never got into a game with the Argonauts, but that led to this year’s chance with Calgary.

Morris, 25, has never stopped hoping, praying or working. He finally caught a break back in May.

“I’d been working out at the IMG Academy facility in Florida,” Morris said. “The CFL teams always go down there for prospect tryouts, and someone liked me. I was on the list of guys Calgary invited to their rookie camp.”

There were several rules seminars. The biggest adjustment for Morris was that anything goes as far as motion in a CFL backfield. That extra (12th) player on offense in the CFL is a back, and there are no limits as to how many players can be moving when the ball is snapped and there are no limitations on their direction. Frequently three guys are moving at once and in every direction.

Morris was still around when Calgary’s veterans arrived. He played with distinction in camp and in preseason games, showing he could handle kickoffs and punts, as well as run the ball and catch it. He made adjustments to playing at altitude. Calgary is way out west, sitting at the foot of the Canadian Rockies, so breathing, especially during a football practice or game, is a little more challenging.

When the final roster cut came on June 12, Morris wasn’t released, but he also wasn’t on the active roster. He was placed on the 10-man practice squad.

“The way I looked at it, it was a positive thing,” Morris said. “Some really good players, some very good American players were let go that day, but they saw enough to keep me. I was humbled and grateful.”

For the next month, Morris worked diligently, practicing with the team, toiling behind Americans Don Jackson and Terry Williams, both of whom have played in the NFL.

“We only have three running backs, so while I didn’t get equal practice reps, I did get a decent number of practice reps every day,” Morris said. “It’s always next-man-up, and your number can come up anytime. I was always just one injury away from being activated.”

At practice on Monday, July 9, Morris figured he was going to be active for the July 12 game at Ottawa because his practice workload increased dramatically and more coaches were watching him.

“After practice, they solidified what I was thinking,” Morris said. “Terry Williams had a separated shoulder and I was going to be activated for the game at Ottawa. I hated Terry got hurt, but it was a chance to showcase what I can do.”

Williams is Calgary’s No. 1 return man and No. 2 running back, and Morris stepped into those cleats.

The game was everything Morris thought it would be. Besides all those punt returns, he got nine carries and had good runbacks on both Ottawa kickoffs.  It was an electric atmosphere, a much-hyped matchup because Ottawa had beaten Calgary in overtime in the 2016 Grey Cup, the CFL’s version of the Super Bowl. But this time Calgary romped behind its dominating defense.

In the first quarter, Morris got the first touchdown of his pro career. It wasn’t what he dreamed about — it wasn’t a 75-yard sprint to daylight — but it was a touchdown nonetheless. He scored on a 1-yard power play. He had to bull his way.

“My heart sped up a little bit when the play call was for me,” Morris said. “At first I was stopped short of the goal line, but I pushed it across with second effort. It was just a yard, but it was not an easy TD. It was a great feeling to put one in the box, and I’ll take it.”

So far, Calgary has been the strongest team in the league and is 4-0. Morris isn’t shocked. Calgary also made the Grey Cup game last year, losing to the Argonauts. As recently aas 2014, Calgary won it all.

“We put on a pretty good show in Ottawa,” Morris said. “When I signed with Calgary, a lot of people told me it was a good organization to go to, that they won every year,” Morris said. “They’re like the New England Patriots of the CFL. Everyone on our team has a fire to compete and is willing to do the extra work that it takes to do special things.”

Off the field, things are going smoothly for Morris. He likes Calgary, a bustling, clean city with over 1 million residents. CFL players aren’t compensated like NFL players, but they make a decent living. The average CFL salary is about $80,000, with rookies making about $50,000.

“It’s all good right now,” Morris said. “The weather here this time of year is just about perfect. I don’t think it’s been above 85 degrees a single day. But I know winter and a  whole lot of snow is coming. I’ve got my boots and my big coat ready.”

Calgary hosts the struggling Montreal Alouettes on Saturday. It’s not certain yet if Williams will be activated or if Morris will be called on again. Either way, Morris will handle it. There are only nine CFL teams, only about 500 jobs in the league, and he’s thrilled to hold one of them.

“I’ll keep working as hard as I can,” Morris said.  “The goal is to keep getting better every day and to take advantage of every opportunity.”

Legion baseball: Lippard coming through in the clutch