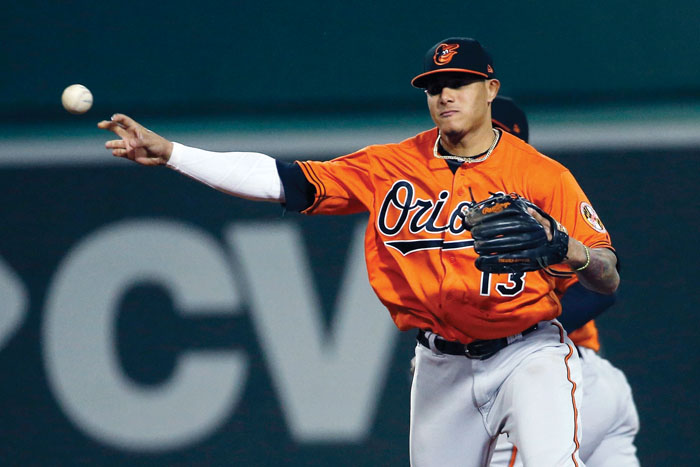 FILE - In this Saturday, May 19, 2018 file photo,Baltimore Orioles' Manny Machado throws to first base to make the double play on Boston Red Sox's Eduardo Nunez during the eighth inning of a baseball game in Boston. (AP Photo/Michael Dwyer)

The Los Angeles Dodgers won the Manny Machado sweepstakes, getting the prized All-Star shortstop from the Baltimore Orioles in a trade Wednesday night.

Machado is expected to be introduced in Milwaukee on Friday before the Dodgers open a series against the Brewers.

Machado’s contract expires at the end of the season, and the last-place Orioles decided against negotiating an expensive, multi-year extension because they have too many holes as the team moves into a rebuilding mode.

“We tried to maintain a competitive club this year, and that’s why we resisted the offers we had in the offseason to trade Manny,” Dan Duquette, the Orioles’ executive vice president of baseball operations, said Wednesday night. “But when it became obvious that it was time to look to the future, trading Manny is the first step in the plan to rebuild our ballclub.”

Though only a summer rental, Machado was coveted by a variety of contenders, including Philadelphia, Milwaukee, the Chicago Cubs and Arizona, currently a half-game behind the first-place Dodgers in the NL West.

“We liked the depth of the Dodger package, we liked the quality of the players in the package and we liked Yusniel Diaz, a player we feel is a gifted hitter,” Duquette said. “We felt he was clearly the best player offered to us during this recent market. He was the key to the trade. But the other players in the trade are also very talented.”

Duquette said Valera will be optioned to Triple-A Norfolk, and the other four players will be sent to Double-A Bowie.

Los Angeles gets a four-time AL All-Star with two Gold Gloves who has 129 homers over the last 3½ seasons. Machado was drafted third overall by the Orioles in 2010, made his big league debut in 2012 and spent his entire major league career in Baltimore.

“Obviously, it’s a bittersweet day for our organization,” Duquette said. “We watched Manny grow up in our franchise the past eight years. We all know what an exceptional talent he is, from the great plays that he made to his elite hitting. He’s always going to be a part of our important part of our club’s history.”

The Dodgers are filling a gaping hole at shortstop created by the loss of Corey Seager, who underwent Tommy John surgery in May.

TEAMS LOOKING FOR HITTERS HAVE OPTIONS BESIDES MANNY MACHADO

Manny Machado will be wearing a new uniform when he plays his next game, and other hitters will be on the move in the next couple weeks.

Even after Machado was traded to the Los Angeles Dodgers, teams seeking to boost their offense will have several options to land a big bat. The four-time All-Star with the Baltimore Orioles was the most coveted player available on the trade market.

There’s only one Machado, but several guys can bolster a team’s starting lineup and make an impact down the stretch.

Here are eight hitters who may have new teams before the July 31 non-waiver trade deadline:

MIKE MOUSTAKAS: After smacking a career-best 38 homers for the Kansas City Royals last year, the two-time All-Star third baseman didn’t get a lucrative deal in free agency and returned on a one-year deal for $6.5 million plus a mutual option for 2019. He has 19 homers and 58 RBIs but is only batting .249 for the worst team in the majors.

SCOOTER GENNETT: The Cincinnati Reds aren’t going anywhere and they’d be selling high on their All-Star second baseman. Gennett, a waiver claim last year, had a breakout season in 2017 when he swatted 27 homers and drove in 97 runs. He’s batting .326 with 16 homers and 63 RBIs this season. Gennett is a fan favorite in his hometown and can’t become a free agent until 2020, so prying him away from the Reds might be difficult.

ASDRUBAL CABRERA: The 32-year-old infielder is batting .281 with 17 homers and 52 RBIs for the hapless New York Mets. He’s only played second base this season but started at shortstop and third base last year. Cabrera is a switch hitter who would give a team versatility and pop. He’s also slated to become a free agent after the season, so the Mets can’t expect to get too much in return for the two-time All-Star.

SHIN-SOO CHOO: A first-time All-Star, Choo has 18 homers and is on pace to hit a career-best 30 for the last-place Texas Rangers. Choo is batting .291 with a .405 on-base percentage, but the left-handed-hitting right fielder just turned 36 and is owed $42 million over the next two seasons.

EDUARDO ESCOBAR: The versatile infielder has a .271 average, 14 homers and 57 RBIs with 35 doubles for the Minnesota Twins. Escobar can play shortstop, second base or third base, plus he’s started in left field during his career. He’s making $4.85 million this season and will be a free agent in the fall.

WILSON RAMOS: An All-Star catcher for the second time in three years, Ramos is batting .297 with 14 homers and 53 RBIs for the Tampa Bay Rays. But he injured his hamstring and is heading to the disabled list, decreasing his trade value.

NICK CASTELLANOS: He’s having another strong season for the Detroit Tigers after hitting 26 homers and knocking in 101 runs last year. The 26-year-old right fielder is batting .305 with 15 homers and 56 RBIs and is under team control for another season.

JOSH DONALDSON: The 2015 AL MVP is struggling through an injury-riddled season and has only played 36 games, but he averaged 35 homers and 100 RBIs between 2014-17 and is entering free agency after the season. The Toronto Blue Jays should be eager to move Donaldson if another team is willing to gamble that he’ll be healthy enough to make a difference.

The Open: Carnoustie presents tough test with no clear…