Escape to the world of ‘The Fantasticks’ 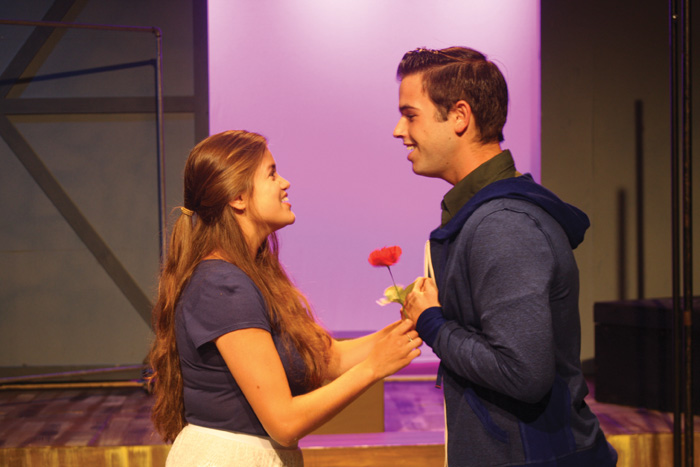 Photo by Hannah Avery Morgan Warren as Luisa, and Jacob Hammill as Matt in 'The Fantasticks.'

“The Fantasticks” is one of the longest-running shows in history, starting in New York in 1960. It’s one of the first shows I remember seeing. I must have been 5 or 6 at the most in Washington, D.C., where my parents worked in theater.

I loved it immediately, and that love has never faded. Thank goodness Lee Street theatre brought it back and has created a deeply thoughtful, funny and magical production.

Director Craig Kolkebeck went to “The Fantasticks” when Lee Street was not able to produce “Memphis.”

Using the same cast, he adapted the play slightly, set it in an old theater and simply let the story entrance the audience.

It’s a Romeo and Juliet story, with the addition of cold, hard truths. It’s a romance, a comedy, a mystery, a tragedy. It’s all things that life is.

Morgan Warren is 16-year-old Luisa and Jacob Hammill is 20-year-old Matt, neighbors with a wall between them. Guaranteed to make them fall in love.

Warren is so appealing as the young dreamer, and Hammill manages the right mix of idealistic young man and overmatched boy.

Tim Campbell plays Hucklebee, Matt’s father, with all of Campbell’s characteristic charm. He’s a pruner in the garden and doesn’t want much moisture.

Debbie Hubbard is Bellomy, Luisa’s mother, and she loves vegetables and waters them carefully. Traditionally, Hucklebee and Bellomy are both widower fathers, but Hubbard is just right for the role, being neither too protective nor too permissive. Both parents are firm in their beliefs and think they are terribly clever to have thought up the wall to bring their children together to marry.

“The Fantasticks” has so many wonderful songs, many of which became popular in the 1960s, like “Try to Remember,” “Metaphor” and “Soon It’s Gonna Rain.” The love ballads, the cautionary songs like “Never Say No,” all build the story, so pay attention.

What Hucklebee and Bellomy need is one final event to make sure the children are madly in love.

With the help of the mysterious bandit El Gallo, they plan an abduction, followed by an amazing rescue.

Mark Stephenson is El Gallo, a man who has to be attractive and appealing, but slightly sinister. The role also requires that the bandit is basically a gentleman. Stephenson gets the signature song, “Try to Remember,” which has been sung by talented artists for 50 years. He does an admirable job.

When El Gallo must have actors for his abduction drama, he enlists Henry and Mortimer (Chris Eller and Dan Mikkelson) with hilarious results. They’re old pros at this, with the emphasis on old, and Eller’s old Henry, bent over, in dirty long underwear and a doublet, is incredibly funny. It’s almost as if he were born to play this part and deliver the timeless line, slightly garbled, “There are no small actors, only small parts.”

Mikkelson plays an eager if clumsy pirate who specializes in death scenes, another very funny bit.

Quietly overseeing it all is the Mute, played by Sabrina Kershaw, whose facial expressions and body language are so perfectly expressive.

Together, they all mesh as only families sharing a wall could. Luisa is idealistic, Matt is swashbuckling. During the abduction — well, you have to see it to understand.

But after the “Happy Ending,” there’s more. Where other stories would end, “The Fantasticks” goes boldly into life after the wild romance.

“This Plum Is Too Ripe” is the perfect way to express dissatisfaction with the humdrum of everyday life. The glow has faded. She’s just a stupid child and he’s just a boring young man. Hucklebee and Bellomy, the wall now gone, immediately decide to build it again because they annoy each other so much. She waters his garden! He snips off her kumquats!

They bemoan the difficulty of raising children by comparing it to the vegetable garden in “Plant a Radish,” as in “Plant a radish, get a radish, not a Brussels sprout.” You never know what to expect from children.

When Luisa runs away with the bandit to see how amazing the world is, the bittersweet scenes are actually rather chilling. Wearing the mask, she sees a funny show. Drop the mask, and it’s Matt, burning. “Put on the mask,” E Gallo tells her, desperate to maintain the illusion.

But Luisa is eventually disillusioned. The bandit has disappointed her.

It’s what happens next that will often leave tears in the eyes as the young lovers sing “They Were You,” a sweet ballad about scales falling from their eyes.

The orchestra, with John Stafford on keyboard, Corky Waugh on bass, and Winifred Garrett playing a beautiful harp, is lovely. The harp adds so much to the show.

Shannon Harris is the choreographer, and there’s a couple of nifty swordplay scenes. Rod Oden designed lights that add to the illusions and a set that never intrudes but serves the action well.

Tickets are going fast. Considering the hot and heated summer we’re having, take some time to enter the world of “The Fantasticks.”