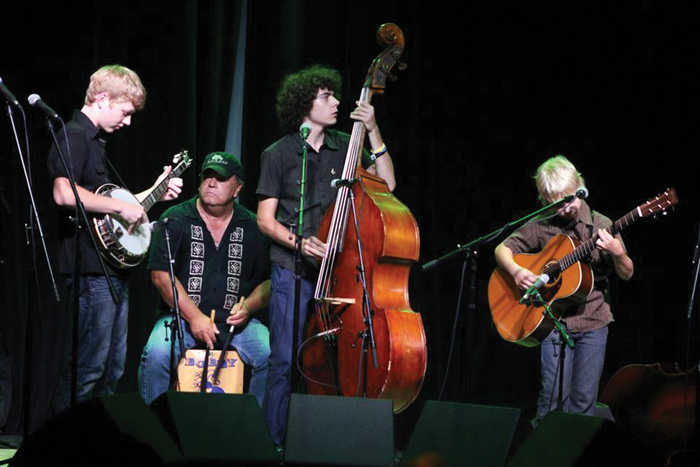 The late Bobby Martin, sitting on top of his drum, always helped kids looking to learn more about bluegrass music. Here, he shares the stage with the Moore Brothers Band in 2013. Submitted photo

Even so, entries are now being accepted for the second annual Bobby Martin Young Songwriters’ Competition, which is part of the Kruger Brothers’ Carolina in the Fall Music and Food Festival.

The festival, which will be held Sept. 21-22 in Wilkesboro, attracts both bluegrass and folk music lovers.

Deb Goodman of Salisbury helps coordinate the young songwriters’ competition named in honor of Martin, her late friend who spent a generous portion of his life studying, playing and preserving bluegrass music.

But more important, Goodman said, Martin believed in the bluegrass tradition of sharing the music and passing it on to younger generations.

“One thing about him was he always nurtured the young,” Goodman said, and he often took time to mentor musicians who were interested.

The Carolina in the Fall website says Martin, known as the “bluegrass drummer,”  left a “trail of drum brushes and sticks with many of the young players he met along his journey across the USA and Europe.”

“It’s all about the kids,” Goodman added of the Martin songwriting competition for musicians 20 and younger, “and encouraging them to continue with the heritage of Appalachian music. … A lot of these kids who are coming and competing knew him.”

For winning, Thrailkill will have his song recorded and mixed by the Kruger Brothers at their Double Time Music recording studio in Wilkesboro. He also received a cash prize and trophy and got to play the song at the festival.

Many songwriting entries come in, Goodman said, and the judges help winnow the list to 10 finalists who play their songs on the Great State Stage. (See the accompanying box for details on this year’s competition.)

Bobby Martin died of cancer April 13, 2016, a day after his 59th birthday. He was a Salisbury native and son of Sam and Ruth Martin of Rowan County. Sam Martin is a master mandolin player.

At his death, Bobby was living in Union Grove, one of the best known places for N.C. bluegrass music. He worked as an independent electrical technician in nuclear power plants across the country and for GSI Physical Services in Wyoming.

When he wasn’t gone for months on a job at a power plant, he was playing and hanging out with many of the greats in bluegrass, including Doc Watson, the Kruger Brothers, Wayne Henderson and Steve Kilby.

Martin was a regular at Merlefest in North Wilkesboro from its beginning. The bands he was most closely associated with were the South Pass Band in Wyoming, the Kruger Brothers and, until his death, Rex McGee and Kripple Krunk.

While Martin could play the fiddle, guitar, mandolin and hand dulcimer, he made his mark with the canjon drum, a box-shaped percussion instrument originally from Peru.

The Bonham Cajons Drum Builders produced a Bobby Martin model ancient tones drum. Drums are not usually associated with bluegrass, but Goodman says, “Bobby paved the way for it to be accepted in the bluegrass community.”

Goodman recalled how she would accompany Bobby and his parents to Saturday morning bluegrass sessions at the Cook Shack in Iredell County. And she traveled extensively with him to bluegrass events on other occasions.

“He was like a brother to me all his life,” Goodman said. “I consider his family my family.”

A multi-media artist who specializes in glass, Goodman said Martin had a love for the Lord, a love for his family and a love for bluegrass.

“Those are three things I know to be facts on Bobby Martin,” she said.