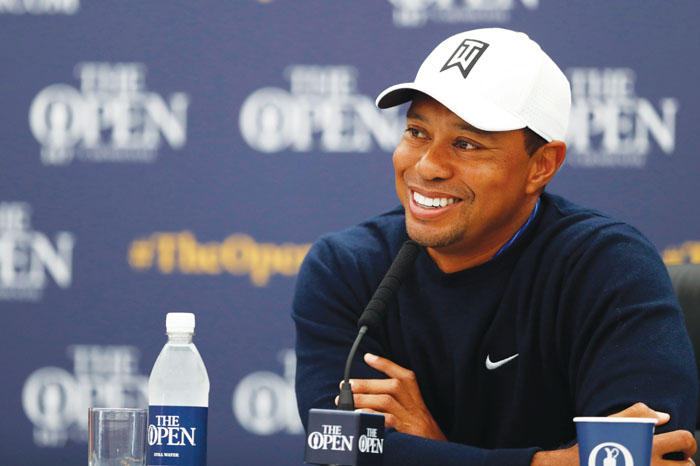 Back at the British Open for the first time in three years, Woods broke from his tradition on Tuesday morning. Instead of being among the first on the tee for practice, he didn’t show up at Carnoustie until his news conference just before lunch. Then, he played nine holes with Masters champion Patrick Reed and Bryson DeChambeau.

This was not a case of a 42-year-old needing his rest.

Entering the year having not played any major since the end of 2015 and the start of three back surgeries, Woods has been feeling better as 2018 has gone on. And there’s something about links golf that inspires him.

“It’s my favorite type of golf to play,” Woods said. “I love playing here, this type of links golf, or a style of links golf down on the Aussie sand belt … because it is creative. We’re not going to get the most perfect bounces. And I think that’s the fun challenge of it.”

He made his links debut at Carnoustie in 1995 as an amateur at the Scottish Open, a week before his British Open debut at St. Andrews. He hasn’t contended on the back nine in the previous Opens at Carnoustie, in 1999 and 2007, though he wasn’t far from a playoff.

Might this be his best shot at winning another major?

“Not to be smart, but it is the next major I’m playing,” Woods said with a laugh.

But over time, he thinks it might be his best chance because of history. Woods recalls 53-year-old Greg Norman playing in the final group at Royal Birkdale in 2008, a major Woods missed because of knee surgery. The following year, Woods missed the cut for the first time at the British Open when 59-year-old Tom Watson was one putt away from winning at Turnberry.

That said, distance is everything at Carnoustie this year, which Woods discovered when he arrived Sunday.

How far the ball travels in the warm, dry air is not the issue. It’s how far it travels once it gets on the baked turf.

Dustin Johnson discovered that when he arrived on Saturday and reached the 499-yard 18th hole, with a stiff breeze at his back and fairways running only slightly slower than they did on the weekend at Shinnecock Hills.

He hit driver into the burn. The next day, his drive was a few yards short of the burn.

“I hit some irons, and depending on the wind, I’ll probably hit anywhere from … I’ve hit 3-wood, 3-iron and 4-iron off the tee,” Johnson said. “I like all of them.”

One thing hasn’t changed about links golf — it’s best to keep the ball out of the pot bunkers, which effectively are a one-shot penalty. The question for so many players is whether that means going down to as little as a 7-iron off the tee (such as the 350-yard third hole) or smashing driver over all the trouble.

Johnson figures he’ll hit driver on half of the holes. U.S. Open champion Brooks Koepka might hit as many as nine drivers.

The conditions are as brittle as Muirfield in 2013, though most comparisons are with Hoylake in 2006, when Woods won the Open for the second straight time by hitting driver only one time all week.

“There’s not a lot of opportunities to hit the driver just because the ball is going to be rolling 80 yards,” Woods said. “It’s just hard to keep the ball in play. Even hitting sometimes 4- and 5-irons, they’ve been running 50, 60 yards. It’s going to be an interesting test to see which clubs we’re going to be using off the tees, and a lot of it is dependent on which way the wind blows.”

Woods had a 2-iron built for him specifically for the British Open, and he wonders how much he’ll even use it. That has been too much club off the tee. Instead, most of his shots are with a 3-iron or 4-iron.

Reed was familiar with conditions the year Woods won at Hoylake, even though he was only 15. Reed won the Junior British Open that summer at Heswall, not far from Royal Liverpool. It was not only dry but extremely hot, and Reed was in rain pants because he didn’t like wearing shorts.