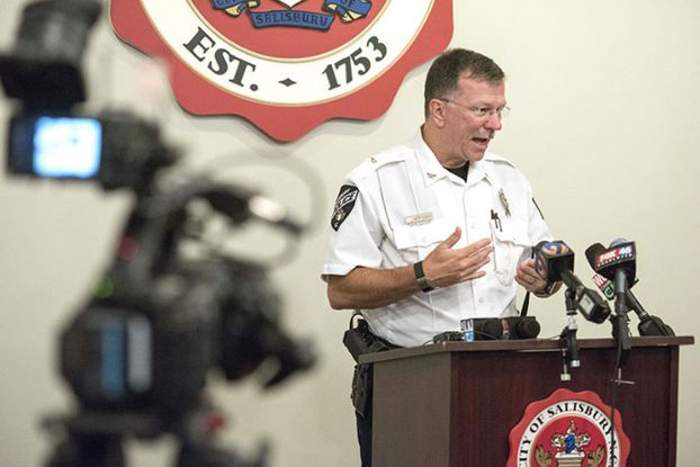 SALISBURY — Police Chief Jerry Stokes presented the Salisbury City Council with news on both sides of the spectrum Tuesday.

The good news is that his department is now nearly fully staffed and has taken great strides toward diversifying.

The bad news is that crime rates in many critical categories have gone up dramatically compared to the previous year.

Stokes said the department will be down to one vacancy after the return of paperwork on a new hire, meaning 80 of 81 budgeted positions will be filled.

“It’s difficult across the country for law enforcement agencies to get diverse candidates,” said Stokes. “… If anything positive came out of the staffing crunch that we were in, we were able to increase that diversity.”

But year-to-date incidents of crime have increased markedly in many aspects compared to 2017, he said.

Instances of shooting into an occupied dwelling are up 70 percent, with 17 such shootings so far compared to 10 last year.

Violent crimes are up 20 percent year over year.

All told, crime in the Salisbury area has gone up 7.2 percent compared year-to-date to 2017, Stokes said.

He said these were “some concerning numbers for us” and that the Police Department is trying to develop strategies to address the increases.

Part of that includes identifying prolific offenders and trouble spots, said Stokes. Another part is addressing complacency among residents and business owners.

Some 65 percent of thefts from motor vehicles occurred when doors were left unlocked, he said, and a number of commercial burglaries happened when businesses failed to use their security systems.

“They’re victims; we’re not trying to say that they’re doing something wrong,” he said. “But … what strategies can we use to make sure they’re using their security systems to prevent them from being victims?”

Stokes said the Police Department is working with the Office of Justice Programs to identify and develop processes that will reduce crime.

• Retiring City Attorney Rivers Lawther was honored with a reception and key to the city after 33 years of service.

• The council approved a $142,204 Downtown Revitalization Incentives Grant for a mixed-use project on East Innes Street.

The project will lead to the construction of a three-story building with eight apartments and the offices of Healthcare Management Consultants.

• The council heard a presentation on classes available in the city and at Rowan-Cabarrus Community College in the areas of light construction, medical coding and forklift operation.