Foul ball made its mark at 1969 All-Star Game 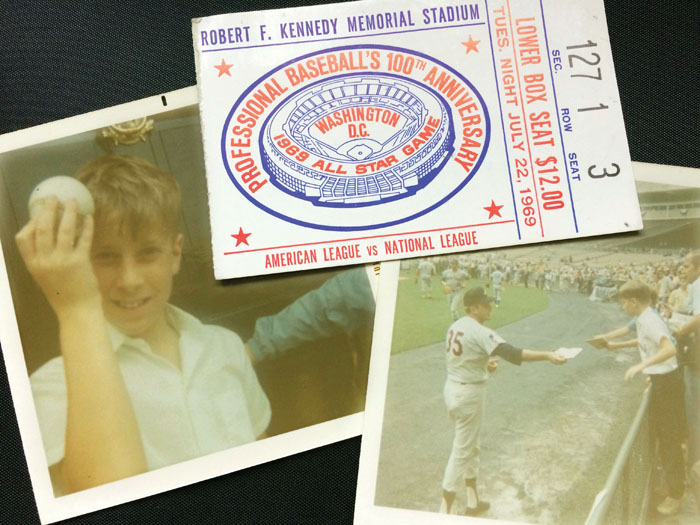 That was the last time the Midsummer Classic was in the nation’s capital, at RFK Stadium. I was 11, loved baseball, grew up watching the Orioles and Senators. I’d never seen a National League player in person. I only saw them on our black-and-white TV, and had no sense of Dodger blue or Cardinal red.

Thanks to Steve Carlton, I collected some neat autographs that day. More on that later. Pointing my trusty Kodak camera, I took a bunch of great pictures — Hank Aaron, Bob Gibson, Roberto Clemente and Juan Marichal.

And because of Johnny Bench, I wound up with a very cool souvenir I never saw coming.

Bench was among 19 future Hall of Fame players on the rosters, and he’d already hit a home run when he came up in the fourth inning. Facing Denny McLain, fresh off a 31-win season, it was quite a matchup.

And I had a front-row seat, down on the field, out toward left.

So when Bench hooked a hard foul over the dugout behind us, I barely turned around. When I did, it was too late.

The ball hit me right in the forehead. It caromed off something. I might’ve heard it whizzing at the last second, but I’m not sure.

It definitely dazed me, and my mom was worried.

“I think he needs to see a doctor,” she told my dad.

“I think he needs to see Willie Mays,” dad answered.

A couple fans dumped their Cokes so my parents could use the ice. They wrapped it in a handkerchief and put the pack on my head, and that helped.

I felt even better when a fan brought over the actual ball — it bonked off my noggin, flew onto the field and was picked up by third base coach Leo Durocher, who tossed it back into the seats.

(We went to the game with my best friend, John. I texted him last week in Colorado to ask what he remembered about the day. His answer: “You got a hard head, buddy”)

Anyway, the next inning, the great Willie Mays appeared as a pinch-hitter. And I clearly saw him.

Funny thing, Mays wasn’t the player I really wanted to see. Neither were Pete Rose, Willie McCovey, Ernie Banks, Tom Seaver or any of the American League stars.

I wanted to see Chris Cannizzaro.

Major League Baseball had added four expansion teams that year — the Montreal Expos, San Diego Padres, Kansas City Royals and Seattle Pilots. To me, the Padres were by far the most interesting.

That’s because I’d heard all about the Padres’ crazy brown uniforms, but hadn’t seen them in color. When I recently found those washed-out pictures in my mom’s basement in suburban Maryland, almost half of them featured the San Diego catcher. He hit .220 that season. He never got into the game, by the way.

An hour before the game, I took it down to the NL dugout — it was easy, in those days — stood at the railing and asked Carlton to sign. He said sure, even though he was the starting pitcher.

Then he just disappeared into the dugout. With my book. I can remember being confused and afraid it was gone forever. I had worked hard to fill it over the years, too, with signatures from Brooks Robinson, Harmon Killebrew and even Mrs. Babe Ruth.

Now, back to the best souvenir of all.

You might think it was the ball Bench hit. I still have it. But that wasn’t the top prize, at least not that week.

Instead, it was the knot the ball left on my head. A badge of honor from a real-live big leaguer. I proudly showed off the bruise the next day when I pitched for the Dub’s Pizza Seals.

Now that was something no one else had.