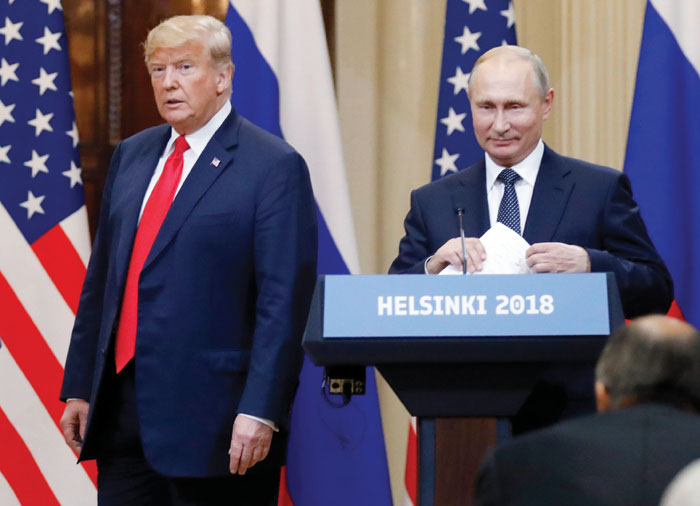 Senators and congressmen who represent North Carolina were quick to disagree with statements made by President Donald Trump during a Monday news conference with Russian President Vladimir Putin.

In response to questioning, Trump said Putin had denied that Russia was involved in attempts to influence the 2016 U.S. presidential election.

The denial was in spite of assessments by American intelligence agencies that Putin ordered an influence campaign, as well as the indictment Friday by Special Counsel Robert Mueller of 12 Russian military intelligence officers on charges of hacking into the email of the Democratic Party and Democrat Hillary Clinton’s campaign.

Sen. Richard Burr, R-N.C., was the first member of the North Carolina delegation to issue a statement.

Burr is chairman of the Senate Select Committee on Intelligence, which has also issued a finding that Russia meddled in the election.

“The Senate Intelligence Committee has reviewed the 2017 (independent counsel) assessment and found no reason to doubt its conclusion that President Putin ordered an influence campaign aimed at the 2016 U.S. elections with the goal of undermining faith in our democratic process,” Burr said.

He said Russia conducted a “coordinated cyberattack on state election systems,” hacking critical infrastructure and using social media to “sow chaos and discord in our society.”

Any statement by Putin contrary to those facts is a lie and should be recognized as one by the president, Burr said.

“Vladimir Putin is not our friend and never has been. Nor does he want to be our friend,” said Burr. “His regime’s actions prove it. We must make clear that the United States will not tolerate hostile Russian activities against us or our allies.”

Sen. Thom Tillis, R-N.C., spoke similarly, saying Putin is to blame for Russia’s poor relations with the United States and the rest of the free world.

“It is Putin’s regime that illegally invaded Crimea, props up Assad’s murderous regime in Syria, assassinates dissidents on foreign soil, and meddles in the elections of the United States and its European allies,” said Tillis.

He said the United States should work with Russia on “specific instances where our nations mutual objectives.”

But, he said, America should confront Russia when it threatens the interests and well-being of America and its allies.

“Dialogue is not a bad thing. However, any meaningful improvement in our relationship with Russia must be solely dependent on whether Putin’s government starts to behave as a good-faith actor on the world stage,” Tillis said. “Unfortunately, recent history casts serious doubt on if that is even a possibility.”

Rep. Richard Hudson, who represents the 8th Congressional District that includes parts of Rowan County, said it is “not a surprise” that the intelligence community found evidence that Russia tried to influence the election.

He faulted Russia for invading Ukraine, saying it had “consistently sought to destabilize democracies throughout Europe and Central Asia.”

But Hudson said assessments found no evidence that Russian election interference affected the outcome of the 2016 election or that the Trump campaign colluded with Russia.

“As a member of the Commission on Security and Cooperation in Europe, I have been and will continue to be a loud and consistent critic of Russia’s behavior,” he said.

Rep. Ted Budd, who represents parts of Rowan County in the 13th District, agreed with Hudson that there is no evidence of collusion between Trump and the Russian government.

As to Putin, Budd said it is “abundantly clear that he does not share our values.”

But Budd defended Trump’s policy on Russia, saying that it shows he clearly understands the threat Russia poses, citing the transfer of lethal weapons to the Ukraine, the bombing of Russian-supported air bases in Syria, and placing additional economic sanctions on Russian individuals and entities for meddling in the 2016 election.

“I support President Trump’s effort in attempting diplomacy with Putin, and it’s my hope that the president’s rhetoric in the coming weeks and months will be in line with his administration’s actions,” said Budd.