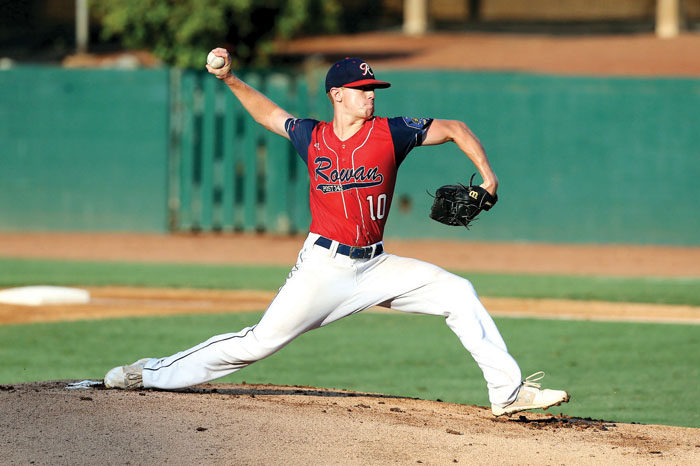 John Owen pitched a complete game for Rowan in a 3-2 victory over High Point in game 5 to advance to the finals against Randolph. Photo by James Sipes, for the Salisbury Post.

“Feeling lucky,” shortstop Clayton Gilmore said at impassioned Newman Park, moments after Rowan scored in the bottom of the seventh inning and captured the best-of-five semifinal series in five games. “We get to play another day.”

Rowan (28-8) will open the best-of-five championship series Wednesday night against defending state titlist Randolph County at Ashboro’s McCrary Park. At stake is a berth in the state tournament, scheduled July 26-30 at Finch Field in Thomasville.

“What a fun series,” first-baseman Chandler Lippard said after contributing two run-scoring hits. “And the best part is we get to keep playing.”

Thank you cards should be addressed to Gilmore, Lippard and winning pitcher John Owen. Gilmore opened the last of the seventh with a hustle-double to right field and scored the winning run after a wild pitch and Lippard’s series-clinching hit to gap in left-center field. Owen was masterful on the mound, finishing with 10 strikeouts, nine groundouts and just enough juice to procure his eighth victory of the season.

“I actually hit my head on the dugout ceiling when (Lippard) got that hit,” the right-hander said after throwing 106 pitches. “I think we were all so excited at that moment. I’m sure we’ll all sleep well tonight.”

That’s a sentiment Rowan’s players couldn’t have envisioned as recently as last Saturday, when they dropped Game 3 and fell to the brink of elimination. “Two days ago I thought they were ready to go to the beach,” said Rowan coach Jim Gantt. “That’s what it looked like.”

Rowan rebounded to snatch the last two games of the series, winning 10-1 behind Hayden Setzer in Game 4 on Sunday and surviving last night’s test-of-nerves by the narrowest of margins.

“Two days ago we were lackadaisical, just going through the motions and not playing clean baseball,” said Gilmore. “But I guess something flipped while everybody was sleeping, because we came back out and got after it.”

High Point (18-9) lost the series but staked one of Area III’s two state tournament berths as the host team. Though disappointed, Post 87 coach Rob Shore was graceful in defeat.

“This series has built confidence in my team,” he said. “I’m excited about our chances in the state championship, but any time it comes down to the last at-bat in this ballpark, it’s probably not turning out well. Being a fan of the game, you can’t ask for more than what these teams gave in this series.”

Game 5 had more twists and turns than a New York City cab ride. Owen retired the first 10 High Point batters and was given a 1-0 lead in the bottom of the third. Gilmore slapped a leadoff single to center against left-hander Koty Proctor, took second on Trevor Atwood’s deflected base hit to left and scored when Lippard blooped an RBI-single into shallow right. “A great way to start it off,” Lippard said.

Owen pitched shutout ball until there were two away in the High Point sixth inning. The guests tied the score when infielder Dalton Ward bounced a run-scoring double to left-center.

“I tried to fill up the strike zone and throw pitches they couldn’t handle,” Owen said after yielding eight hits and one earned run. “But after the first few innings, they started to sit back and were able to pick out good pitches to hit.”

Rowan regained the lead in its half of the sixth after Proctor recorded his 10th and 11th strikeout. With runners at first and second and facing reliever Avery Cain, Bryson Wagner pushed a bunny-hop grounder through the High Point infield that plated CP Pyle with the go-ahead run. Owen, who threw 80 pitches in the series-opener last Thursday, appeared to tire in the top of the seventh. High Point put its first three batters on base and tied it 2-2 on Connor Smith’s single up the middle — leaving runners at the corners with none out.

“That’s when John made his best pitches of the night,” said Gantt. “That’s when he was vintage John Owen.”

Owen escaped further damage when he induced a tag-out at home, then fanned Mark McLamb for the fourth time and retired Tyrese Hearst on a fielder’s choice.

“The biggest thing about this game is that John Owen was available,” said Shore. “That was a smart move on their part to pull him after 80 pitches the other night.”

So was Gilmore’s decision to take third base on Cain’s second wild pitch, a 58-footer that pinballed to the left of catcher Jarret Crump. “He trusted his instincts,” Gantt said. “He hustled.”

Lippard produced the molar-grinding finish when he barreled a 1-2 pitch that split two outfielders and reached the wall in left-center. “I told myself to stay focused,” he said. “I listened to the coaches, tried to stay in my gaps and hit it as hard as I could.”

And with it, he set off a head-banging celebration.

“I know our fans were all nervous,” said Owen, who threw first-pitch strikes to 25 of the 29 batters he faced. “Everybody had to be nervous. But we had it under control.”