Legion baseball: Lippard coming through in the clutch 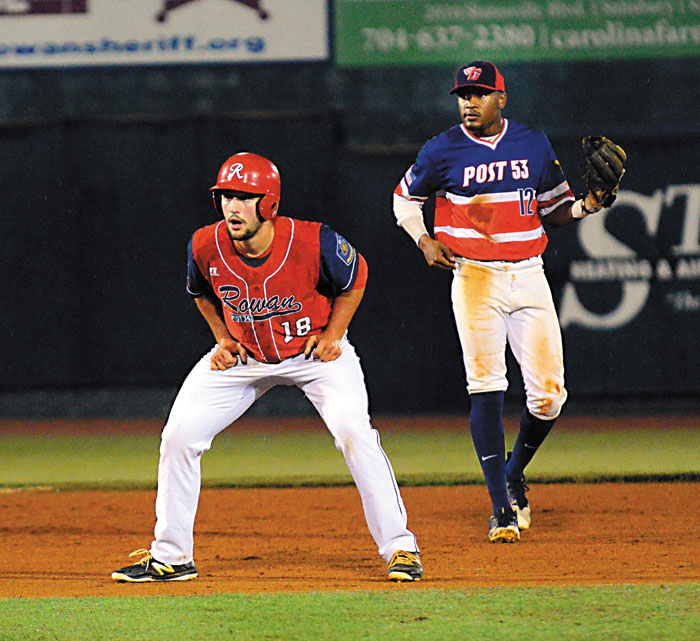 Wayne Hinshaw file photo/for the Salisbury Post ... Rowan American Legion first baseman Chandler Lippard flips the ball to pitcher Maddux Holshouser, covering for an out. Lippard leads the team in RBIs this summer and had the walk-off double to win the Area III semifinals series on Monday night.

SALISBURY — Chandler Lippard was the guy Rowan County wanted at the plate for the series-deciding at-bat against High Point on Monday.

“I wasn’t nervous, I was just hoping that I’d get a chance to swing,” Lippard said. “I thought they might walk me, but I’m glad they didn’t. I went up there thinking that it was my turn to do something.”

Lippard came through with his crucial hit with runners at second and third and no outs. He got it  when he was behind in the count.  It was a 1-and-2 pitch after he’d taken a ball and then fouled off a couple of tough pitches.

It was a tight situation in which a lot of guys get over-anxious and get themselves out with a weak swing, but Lippard smoked a line drive to left-center. It barely split the sprinting outfielders — Rowan head coach Jim Gantt initially thought the ball had been caught — but the blow would have scored Clayton Gilmore from third base whether it had been a single or just a sacrifice fly.

“Lippard can hit,” Gantt said. “And what makes him really unusual is that he’s at his most dangerous with two strikes. He never panics. He was a good hitter for us last year, but he’s a better hitter now. He’s stronger. He’s more confident.”

Lippard, the first baseman and cleanup hitter, leads Rowan County — by a lot – in RBIs. He has 45, 10 more than Trevor Atwood, the veteran catcher who swings in the No. 3 hole.  Lippard had eight of those RBIs in the exciting High Point series after producing six in the three-game Stanly County playoff series.

“The guys who hit in front of me (Hayden Setzer, Clayton Gilmore, Atwood) have gotten on base a whole lot,” Lippard said. “I’ve just tried to do my job, tried to get them home with solid contact. I don’t like to swing at the first pitch very often. I try to stay patient and stay gap-to-gap as far as my approach.”

Gantt experimented with Lippard batting second in the early going, but eventually he found the lineup that functioned best. There’s speed at the top with Setzer and Gilmore, while Atwood and Lippard have turned into bash brothers. Wayne Mize and Luke Barringer, who come after Lippard in the order, are .300 hitters with some power. The bottom guys — usually C.P. Pyle, John Owen and Bryson Wagner – don’t have high batting averages, but they get on base often and score plenty of runs.

“It’s worked pretty well,” Gantt said. “We needed to get Atwood pitches to hit, and teams have pitched to him because Lippard is protecting him. Maybe you can pitch around one of them, but not both.”

Lippard blossomed as a high school junior for coach Mike Herndon at Salisbury High, batting .415 with 16 RBIs, in the short high school season. As a senior, he got off to an incredible start and hit .462 with 29 RBIs and a .552 on-base percentage.

Players with such eye-popping stats usually are headed to play college ball somewhere, but that’s not the case with Lippard. He probably could excel in Division II baseball, but he knew after he toured East Carolina that was where he wanted to attend college. He has the career plan of becoming an anesthesiologist. That’s a demanding goal that is going to require four years of undergraduate school, four years of medical school and four years of residency beyond that.

“It means I’m going to need to put most of my focus on academics,” Lippard said. “It was kind of a hard decision not to try to play baseball for a college team, but it would be difficult with all the practice time and travel time. But I do  hope I can play on the club team at East Carolina.”

Lippard is 18 1/2, so age-wise he’ll still be eligible to play Legion ball again in the summer of 2019. He says that’s something he wants to do.

Between Legion games, Lippard is getting experience this summer in a hospital setting. He works as a volunteer on Mondays and Tuesdays at Novant Health Rowan Medical Center.

“Usually I’m working in the supply room in the basement,” Lippard said. “But some days I’m in the lobby, escorting people to patients’ rooms. It’s just good exposure and good experience being around medical professionals.”

Lippard’s non-stop summer also includes a landscaping business with his younger brother (Parker), an occasional fishing expedition, and, of course, lots of baseball. After his morning hospital duties were finished on Tuesday, Lippard had a rare day away from Newman Par. Rowan’s drained players — and coaches — took a break before they start tonight’s best-of-five Area III championship series at 7 p.m. at Randolph County’s McCrary Park.

Lippard and baseball go back a long way. He’s one of those unusual players who bats right-handed but throws left-handed. One of his earliest baseball memory involves his mother buying him a right-handed glove.

“It didn’t feel right,” Lippard said. “It just felt natural for me to throw left-handed.”

Left-handed baseball players almost always end up on the mound or at first base, and Lippard’s fielding skill exceed his throwing ability. So first base became his home.

“I remember they put me in the outfield once for a travel ball game,” Lippard said with a laugh. “First batter hits a popup to me and I missed it. After that, I was always a first baseman.”

He’s become a good one.  He’s good on the tough hops, good at scooping low pegs out of the dirt, good at stretching for off-target throws and good making the tag on pickoff plays.

“He can really play first base,” Gantt said. “He’s helped out all our infielders.”

The 5-foot-11 Lippard’s bat was solid last summer when he drove in 32 runs, but he’s taken a jump this year. Part of that jump is his added strength. He came into the summer at 210 sturdy pounds, but the heat has melted him down to about 190 that is all muscle and bone.

Lippard said the added muscle can be traced to the weight training that all the Salisbury High players participate in.

“Every day is weight day at Salisbury,” Lippard said. “Getting stronger definitely  has helped my confidence. Every Legion game I go out there confident and having fun.”

Rowan has experienced more fun than anyone expected when the roster sheets were distributed in May. Lippard is the only Salisbury High player on the senior Legion team, and there are no North Rowan or homeschooled players on the roster this time. The team has relied for depth on a number of West Rowan players who saw limited varsity high school action. Other players such as West’s Daniel Durham, East’s Wagner and rising Carson sophomore Pyle had good high school seasons but have exceeded all expectations.

“I thought we were probably going to be too young to be good,” admitted Lippard, one of just four returning players. “When I first saw Pyle, I had no idea who he was. But the young guys just keep coming through. That last win against High Point, that was the most fun I’ve ever had in a baseball game.”

Defending state and regional champ Randolph County (22-14) got off to a rough start,  losing early games to Southern Division clubs Stanly County, Mocksville and Kannapolis. Randolph also played two pretty ugly early games with Rowan. Randolph built an 8-0 lead and held off Rowan, 9-8. Rowan had a 10-run sixth and beat Randolph, 12-8. But as is always the case, Randolph has gotten better and better and is riding a seven-game winning streak. How much better? Randolph lost to Kannapolis, 10-2, in the regular season, but mercy-ruled Kannapolis twice and and swept a best-of-five semifinal playoff series. Randolph has been able to rest since finishing off Kannapolis on Saturday. … While only the winner of this series will join High Point in the state tournament, Randolph is certain to keep playing as it once again hosts the Southeast Regional. … Legion’s stringent pitch count rules will dictate who pitches for Rowan in this series and when. Once a pitcher throws his 81st pitch of a game, he can’t take the mound the next four days. Owen, who won Monday, won’t be able to pitch again until Saturday, which, if there are no rainouts, would be Game 4.  Hayden Setzer, who threw 98 pitches in winning on Sunday, won’t be able to pitch until Game 3 on Friday. Daniel Durham, who threw 103 pitches on Saturday, would be eligible to pitch Game 2 at Newman Park on Thursday. Maddux Holshouser, who threw 97 pitches to get through five innings, last Friday, is available to pitch Game 1 tonight, but Gantt is exploring all his options, so don’t be shocked if  Daniel Sell or Jake Perez gets the call.