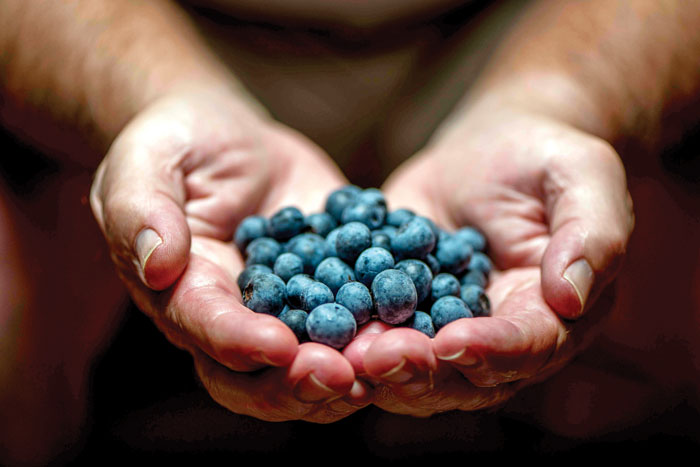 Blueberry season is here, and it’s a short one, with some growers already finished with their crops.

What’s not to like about a blueberry? They’re a lovely color, no big seeds, and they play nicely with savory food as well as sweet.

For years, blueberries have been hailed as a superfood that can protect a person from heart disease and cancer. They can maintain bone strength, mental health and blood pressure. Wild blueberries have the highest antioxidants compared to cultivated blueberries.

Maybe the world needs a prescription for blueberries.

One thing to be cautious about — blueberries have a high vitamin K content, which can interfere with blood clotting. If you take blood thinners, ask your doctor how many blueberries you can eat.

Blueberries are called nutrient dense because of the vitamins and minerals they contain, so they come in near the top of the good foods lists.

The best way to eat them is fresh, tossed in your cereal or oatmeal, with plain yogurt, in a smoothie, a salad and to top things like pound cake or vanilla ice cream. Freezing them can cause them to loose some of the health benefits, but it is unclear how much.

Blueberries are also available at the Salisbury-Rowan Farmers’ Market, which sets up from 8 a.m.-noon on Saturdays at 520 S. Main St. Recently, Twin Oak Farms and Lakeside have had blueberries, sparing you the picking. Randy Elium will pick blueberries to order. You can leave a message at 704-636-2671 to place an order.

The nation’s largest producer of blueberries is Washington state, followed by Michigan, Georgia, Oregon, New Jersey, California and North Carolina. The United States produces the most blueberries in the world.

We picked some blueberries at a friend’s house and needed a quick dessert, so we made a very simple trifle, skipping the custard or pudding and just using whipped topping. It would be even better with layers of whipped cream, but it was a hot day and this was easy.

1/2 cup (approximately) blueberry or white wine, such as riesling

Cut poundcake into slices that will fit in the bottom of a large glass bowl or trifle dish, sprinkle with wine (or more orange juice) to moisten. Top with blueberry mixture, then a layer of whipped topping. Repeat layers until the bowl is full and garnish the top with some blueberries.

Refrigerate and marinate at least 30 minutes and up to 24 hours. Turn occasionally to coat.

Preheat oven to 350 degrees. Spray two 4-by-8 inch loaf pans with cooking spray. Cut two pieces of parchment paper to put in the bottom of each pan, they spray again. Set aside.

In another bowl, beat together eggs, vanilla, oil and zucchini, then the cup of white sugar and the cup of brown sugar. Blend.

Add the flour mixture in thirds to the creamed mixture, beating after each addition.

In another bowl, toss blueberries with about a tablespoon of flour to coat so they don’t sink to the bottom. Carefully stir in blueberries.

Divide batter between the two loaf pans. Combine the 1/4 cup sugar and 1/4 tsp. cinnamon and sprinkle over batter.

Bake 45-55 minutes or until done when a toothpick inserted in center comes out clean. Cool pan on rack for 15 minutes, then turn out and cool completely.

In the container of a food processor or blender, combine blueberries and apple juice concentrate.

Process until it is liquefied, then pour into an 11-by-7-inch baking pan. Cover and freeze until firm around the edges, about two hours.

With a heavy spoon, break the frozen part into pieces. Place in the food processor or blender. Whirl until smooth, but not melted.

Put into a 9-by-5-inch loaf pan and freeze until firm.

Serve within a few days.

In a saucepan, heat the blueberries and honey or maple syrup over medium heat, covered, until blueberry juices are bubbly.

Mash blueberries with a fork to help get juices out and cook an additional 5 minutes, but don’t let the mixture boil over.

Remove from heat and strain using a fine mesh strainer. Discard pulp and place syrup in the refrigerator to cool.

Once cool, combine the blueberry syrup with all the other ingredients and whisk until smooth and creamy. Keep in refrigerator until ready to use.

‘Now our first priority is Elijah’: Children raised by…