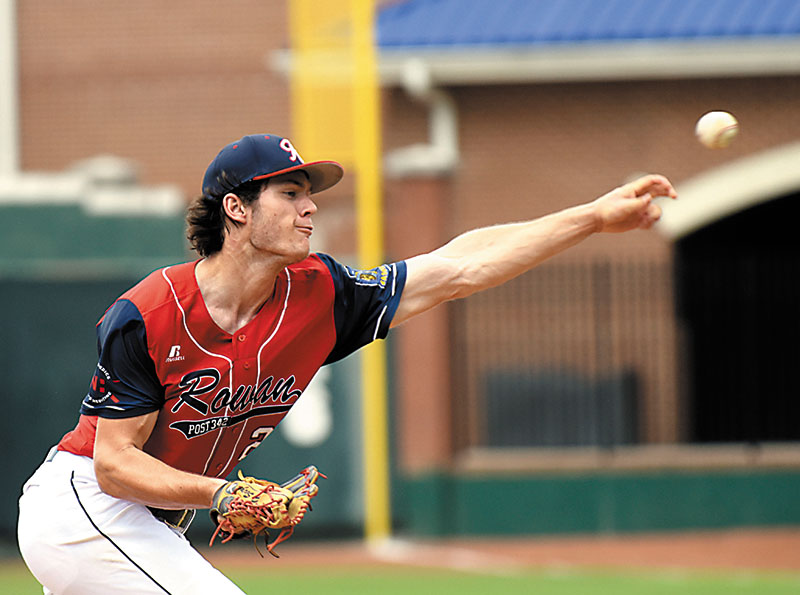 Rowan’s Hayden Setzer pitches against Eastern Randolph during a game on May 26. Rowan beat High Point on Sunday, 10-1.

“Staying alive,” catcher Trevor Atwood exclaimed at Finch Field, where Rowan (27-8) banged out five extra-base hits and evened its Area III semifinal series at two games apiece. “I’m so glad we won tonight. We had lost two in a row, but this shows that we’re all-in.”

They are, now that a season that was turning sour is sweet again. Rowan collected 12 hits and rode Hayden Setzer’s well-rested left arm to an easy win. A decisive Game 5 is scheduled tonight at Newman Park.

“I really didn’t feel much pressure,” said Setzer, who calmly struck out nine batters and scattered five singles in 6 1/3 innings. “I just knew I had a job to do, so I went out there and competed and had fun.”

It certainly looked that way. Facing elimination, Setzer yawned in the face of adversity and saved the day. Rowan supported him with a cascade of offense that included a pair of run-scoring doubles by Chandler Lippard and John Owen’s RBI-triple and RBI-double. Teammate Wayne Mize added a run-scoring double.

“This was a totally different game from last night,” Post 87 coach Rob Shore said. “But in a three-out-of-five (series), that’s the name of the game. It really shows the depth of your pitching staff and you get to see a lot of coaching.”

If you were watching Setzer, you saw a lot of deception. The Catawba-bound southpaw made his first mound appearance since June 30, punctuating a triumphant return by forcing High Point (18-8) to play the game at his pace. He had pin-point jurisdiction of both the inside and outside corners, thanks chiefly to a sweeping slider that had left-handed batters waving at air and right-handers leaning backward.

“I’ve been playing with Hayden since I was nine years old,” said Owen. “And I wouldn’t have wanted anybody else out there. Watching how confident he is, knowing he’s going to fill up the strike zone — it’s all reassuring.”

Listen to High Point’s Mark McLamb, a lefty-swinging outfielder who bats leadoff: “It was really hard to pick up that slider,” he said after fanning twice and punching a single to right-center against Setzer. “He starts it in at your feet, your shins. Then it breaks across the plate and you’re off-balance. It was just hard to read. We didn’t have many good at-bats against him. We should have had a plan in the box, but we just took it pitch by pitch.”

Rowan got the party started early against losing pitcher Colin Best — a UNC-Greensboro signee originally slated to start Game 1 of the series last Thursday. He was tagged for four runs on four hits, walked five and uncorked six wild pitches — all in 2 1/3 innings. Lippard doubled home Clayton Gilmore to open the scoring in the top of the first before Mize steered a run-scoring base hit to left that made it 2-0.

Lippard’s second run-producing double bounced up an incline and off the left-field wall in Rowan third and Owen’s three-bagger over McLamb’s head in center made it 6-0 in the fifth. “The game just got away from us,” Shore said.

High Point’s lone run crossed in the last of the fifth. Jarrett Crump was hit by a pitch, advanced to third base on McLamb’s single to the right-center gap and scored when Tyrese Hearst whipped a single up the middle. Rowan closed the scoring with three runs in the top of the sixth, the last two when Owen sent a buzzing grounder into the left-field corner.

“Now the plan is to continue this momentum,” said Owen, Rowan’s Game 5 starter tonight. “If we can, we’ve got a good chance to move on. That’s what we’re playing for.”