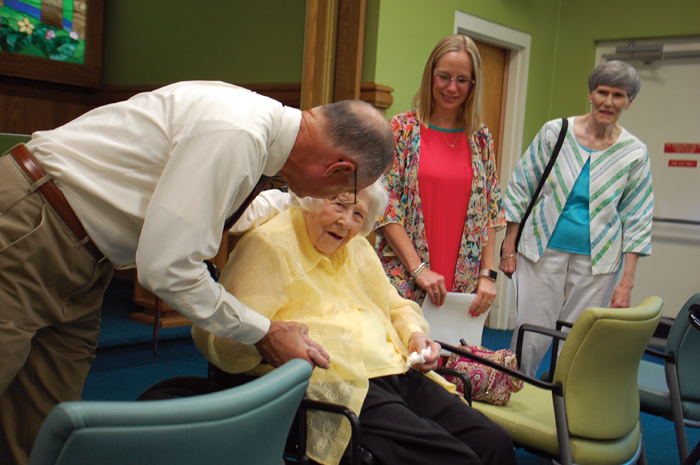 SALISBURY — In a way, it was a rally for Riley.

Residents, friends and family of Riley Burton — church pianist and organist extraordinaire — filled the chapel and activity room of Trinity Oaks Health & Rehab Sunday afternoon. The only thing missing for Burton was a piano.

For the past 37 years as a volunteer and more recently as a resident herself, Burton has played the piano for Sunday afternoon church services at Trinity Oaks (the former Lutheran Home), not to mention the many other times she accompanied the resident sing-alongs during the week.

But Sunday afternoon, Riley officially stepped down from her piano-playing role and gladly asked friend and fellow pianist Johnsie Taylor to fill in.

Burton, 99, held a seat of honor, front and center in the chapel, as the Rev. Brenda Bynum led the service.

A reception in Burton’s honor followed.

Bynum said it was both the Lord’s Day and Riley’s Day.

“Riley, you really know how to pack them in,” Bynum said, looking out at the big crowd.

Burton first took piano lessons with her sister at the age of 7. The story goes they sometimes went to the lessons in Faith in a horse and buggy. By 14, Bynum was playing the piano at her home church, Organ Lutheran.

Over the years, she became identified as the pianist/organist at two Lutheran churches in particular — Organ and St. Paul’s — not to mention those 37 volunteer years at Trinity Oaks.

The Rev. Gene Bruce, a longtime chaplain at the Lutheran Home, remembered a time when the Rev. Lester Roof, one of Riley’s pastors, told her to cease and desist from helping other congregation members clean the church windows.

She was too valuable.

“If you hurt your fingers, we’d be in big trouble,” Roof scolded her. “You have million-dollar fingers.”

Bruce said the church pastor “hit that on the nail right there.”

Before everyone left Sunday’s service for the reception, Bynum kept the altar candles burning and went through the crowd with a microphone, asking for people to weigh in on the life of Riley Burton.

There were many takers, and they often commented on her gardening skills, strong opinions, meticulousness, warmness and generosity. And they told some things at her expense.

Tim Deal recalled a year when Riley and her late husband, Roper, attended a N.C. Synod Assembly at Lenoir-Rhyne College and, as usual, they stayed in a dormitory room. Riley had forgotten the nightcap to keep her hair in place for the next day.

She decided to wrap a pair of underwear on her head as a substitute.

Maybe it was the Rev. Floyd Bost (Deal’s father-in-law), who told her she was lucky there wasn’t a fire and she had to be rescued, because first-responders wouldn’t have known which end was up.

Bost was in Sunday’s audience.

He reminded Burton how she used to play the organ at St. Paul’s Lutheran from the balcony. Each year, Bost made a point of recognizing the people who provided special service to the church, such as Burton, but Bost told her she didn’t have to walk all the way down from her upstairs perch.

She could stay up there on her stool, he said. Burton quickly corrected Bost by noting she sat on a bench, not a stool.

“You use a stool to milk cows,” she said.

Brenda Zimmerman has known Burton since 1981, when Zimmerman first came to the Lutheran Home as an activities director. She noted that Riley has seen all facets of this operation — as a volunteer, caregiver, family member and resident.

Riley’s mother had been in a Lutheran home in Hickory. Her husband, sister and brother-in-law were residents here. Now she is. So her input has always been valuable.

Zimmerman said Burton owns a servant’s heart, and whenever she hears the expression “melt me, mold me, use me,” she thinks of Riley. But she also had to tell a story on Burton.

Years ago, the staff routinely would order Chinese food from a particular Salisbury restaurant. But one day, the newspaper reported the restaurant had been cited during an inspection for having two skinned cats in its kitchen.

It wasn’t too long afterward that Riley was having Chinese food again with Brenda and others and her first question was, “Where did you get this?”

She was reassured it came from a different establishment, but for the rest of her dinner, every time Riley stuck a fork into her plate, a staffer named Phillip would say “meow.”

“Riley, you’re special,” Bill Shive said when the microphone came to him. He recounted how back in the day, when neighbor helped neighbor, his folks would send him to plow the ground for Riley and Roper Burton’s garden in the spring.

He was young then, maybe 8 or 9, Shive said. He was surprised when the Christmas service at Organ Lutheran Church came around one year, and he was called down from the balcony to pick up a gift that was under the church’s Christmas tree for him.

The young Shive opened it up, and it was a shirt from the Burtons. Shive reassured Riley he wasn’t wearing that same shirt Sunday.

The audience included Riley’s nieces, Sherri Gooch of Salisbury and Alice Fairbrother of Raleigh. Alice’s husband, Elwood, said he first came to know Riley 52 years ago and has loved her since.

Many times Sunday, people told Riley how much they loved her.

But when it came to his garden, Fairbrother said, “she was never satisfied.” Burton usually didn’t like the way he watered, planted or divided, but he’s quite proud of the hostas in his yard that were cloned from some of hers.

Bynum, who as campus chaplain has been conducting the Trinity Oaks service for almost four years, said she didn’t know what to expect when she first arrived and realized her piano player was then 95.

But Bynum was impressed. Burton helped her to embrace the community and find her way through the service by telling her, “We do it this way.”

“We became a team,” Bynum added, and she received a promise from Burton that she will sit in the front row every Sunday. even though it won’t be at the piano.

“You’re going to be the mother of this church,” Bynum said.

Will Riley ever play at the service again?

“If I ever get these fingers working again,” she said.

But it will cost you a million dollars.