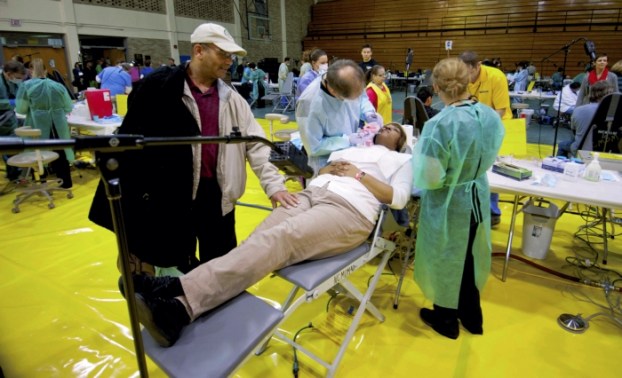 Dwayne Williams gently touches his wife's leg while the dentist starts the procedure to remove a problem tooth at the 2015 Missions of Mercy dental clinic in Salisbury.

Letter: Look at capitalism from both sides

Kelly Stuart-Will’s letter, “Socialism stifles creativity and promotes mediocrity,” on July 10, is an epistle that fails to note the capitalism in this country has run amok.

All countries have a little capitalism and socialism, as does the U.S., but capitalism in this country has gone way too far. Only the wealthy have money for much of anything, and they have far more than they need.

The wealthy own corporations and everything they desire, while the rest of us struggle to live, maintain health, etc.

And those wealthy people and wealthy corporations pay far too much to influence our lawmakers and decision-makers, and they control decisions that further cause havoc in our lives.

Outside money from such dark places as Russia is also rampant in this influence. Pharmaceutical companies have raised prices on common but life-saving drugs as well as those specialty drugs supposed to save lives for cancer patients, etc., to the point that common people cannot afford them. Only the wealthy and those lucky enough to have employment that covers health care can afford health care.

And some call this the greatest country. Far too many people beg to differ. Millions of good people deserve and want a better system than is the capitalism that is in this country. Social Security is a good example of a form of socialism, and Republicans are still trying to kill it.

Far too many people fail to look at both sides of issues, and this is certainly one. I, for one, am ready for a different system that has capitalism a lot less prominent. I am ready to see more of you practice “Love thy neighbor as thyself,” instead of just talking about it on Sunday.

Granddaughter Somer Little is the latest mountain climber in Yoshiko Otey’s family, this time climbing the Alps recently. We were... read more