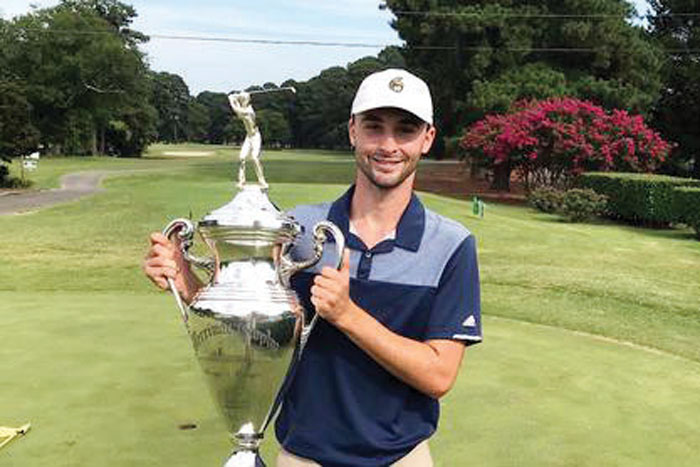 PORTSMOUTH, Va. — East Rowan graduate Nick Lyerly jokes that he recently celebrated his 19-and-a-half birthday, but he’s a still a teenager and an awfully young guy to be doing the things that he’s doing.

Lyerly took the Eastern Amateur, one of the elite amateur golf tournaments in the country, on Sunday, and he didn’t just win it, he owned it. He dominated. The rising sophomore at UNC Greensboro led wire-to-wire — 63-65-67-69 — 264 — for a five-shot victory over Appalachian State’s Tripp Summerlin and Virginia Commonwealth’s Alston Newsom.

Lyerly won the Southern Conference Men’s Golf Championship three months ago and was the youngest ever to claim the North Carolina Amateur crown in 2016. Now he’s added to an already impressive resumé.

“Winning the Southern Conference, that was huge because it was such a team thing, helping UNC Greensboro get to the regional,” Lyerly said. “And the N.C. Amateur will always be memorable for me because it was the first really big tournament I’d ever won. But the Eastern Amateur ranks right up there with those two because this definitely was the strongest field of any tournament I’ve won.”

Lyerly made golf look easy the first three days. He practically yawned. He cruised. He missed only a couple of greens in regulation and didn’t make a single bogey for three rounds. Thirty-nine pars. Fifteen birdies. He made 15-under look as routine as 15-under can possibly look.

“As far as ball-striking, those three days were the most consistent rounds I’ve played in my life,” Lyerly said. “I’d never, ever played three straight rounds without a bogey, but this was a good course for me. It’s not a particularly long course, and I was able to hit the driver just about every hole. You have to be accurate with the driver here, but I was hitting it straight every day, and I had a lot of easy approach shots to the green.”

Lyerly’s tournament didn’t start in promising fashion with Wednesday’s practice round. Warning horns blew golfers off the course after Lyerly had played only 11 holes. Thunder was rolling, and there were lightning concerns. Lyerly never was able to get back on the course, so when he played holes 12-18 in Thursday’s first round, he was seeing them for the first time.

“Fortunately, those are all holes that are right there in front of you,” Lyerly said. “There were no tricks, no surprises.”

He crushed the par-70 layout at the Elizabeth Manor Golf & Country Club for seven birdies on the first day and led by three strokes. He was up by five after 36 holes and took a commanding, four-shot into Sunday’s action.

After Lyerly birdied No. 2, a short par-4, and birdied No. 3, a 573-yard par-5, he stood at 17-under and his playing partners, Summerlin and Alston, were basically competing for second place.

After he parred No. 8, Lyerly owned a remarkable streak. He’d played 62 holes without a bogey.

The first real adversity he’d faced in the tournament came on No. 9. He three-putted for a bogey, missing a 4-foot putt for par.

“That hurt because it shouldn’t have happened,” Lyerly said. “I was about 15 feet from the hole, putting for birdie, but then I hit two really bad putts in a row. That killed my momentum a little bit, but I told myself I had to keep going. I still had a five-shot lead. I told myself it was still my tournament.”

On the par-4 10th, he missed the green with his second shot and was situated in some tall grass. The possibility was there for bogeys back-to-back, but he chipped past the hole about 5 feet and made a challenging putt coming back to salvage par.

“That probably was key moment for me in the tournament,” Lyerly said.

“That’s when I knew, for sure, I was going to win this tournament,” Lyerly said.

He made another birdie on 12, sticking his second shot on a par 4 a foot from the flag.

On the part-5, 548-yard 18th, with a seven-shot lead in his pocket and victory assured unless he experienced an absolute disaster, Lyerly whipped his drive long and straight.

But then he shanked his second shot, a 3-iron, his first lousy swing of the tournament. His ball trickled into trees. He took a drop, took the stroke penalty and was hitting his fourth shot. But this time he drilled a 3-iron out of trouble and then got up and down for a bogey 6.

Sunday’s scrambling 69 wasn’t the walk in the park the first three rounds had been, but Lyerly still won comfortably. He finished five shots ahead of Newsom and Summerlin, a friendly rival for years.

“I’ve played in Junior tournaments with Summerlin for a long time,” Lyerly said. “That helped me, having a good friend out there, someone to talk to.”

Alston made a terrific comeback. He finished last in this tournament in 2017 but was one of the pace-setters this time.

Walker Cress, an accomplished local golfer from Concord High and James Madison University, shot 70-69-66-71 and tied for 19th at 4-under 276.