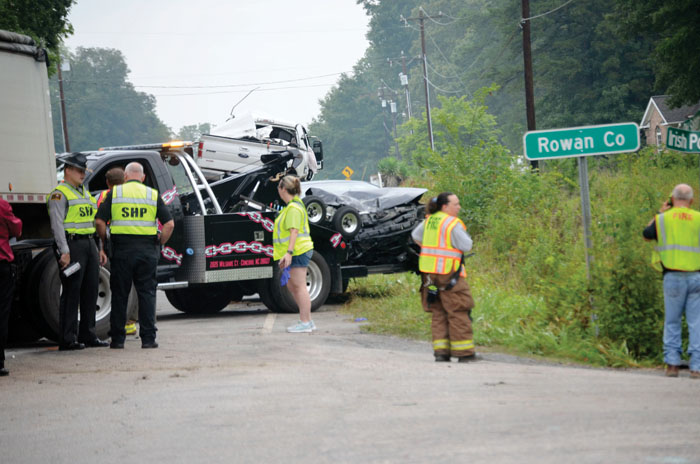 N.C. HIghway Patrol officials said the driver of this pickup pulled into the path of a tractor trailer and then crashed into a Ford Fusion, whose driver was an off-duty Huntersville police officer. The driver of the pickup died at the scene. Shavonne Walker/Salisbury Post

CONCORD — A Concord man was killed Monday morning in a three-vehicle collision at the intersection of Salisbury-Concord and Irish Potato roads.

Others involved in the collision included a Salisbury tractor-trailer driver and a Huntersville police officer, both of whom were not seriously injured.

Brian Frederick Manring, 20, of the 4600 block of Barrier Road, was traveling west in a 2013 Ford F-150 pickup on Irish Potato Road. According to N.C. Highway Patrol Trooper J.A. Miller’s report, Manring failed to yield the right of way at a stop sign and made a left turn onto Old Salisbury-Concord Road into the path of the tractor-trailer.

The collision occurred just before 7 a.m. in Cabarrus County. Some of the vehicles came to a stop in Rowan County.

The tractor-trailer driver, Walter Lee Fink, 60, of the 500 block of Mahaffey Drive, was traveling north on Old Salisbury-Concord Road. The tractor-trailer struck the pickup on the driver’s side. It pushed the pickup left of center into the path of a 2010 Ford Fusion driven by Ryan Wesley Smith, 32, of the 9300 block of Julian Clark Road in Huntersville.

The pickup and the passenger car collided. After the impact, the tractor-trailer and the pickup continued to travel left of center and eventually ran off the road to the left. The Ford Fusion crossed the center line, traveled off the road and down an embankment.

Manring was wearing a seat belt, the report said. Officials said speed does not appear to have been a factor, according to the preliminary investigation.

Both Fink and Smith were taken to Carolinas Medical Center-NorthEast with minor injuries, according to the collision report.

A spokeswoman for the Huntersville Police Department said Officer Smith was heading to work when the accident happened. He went to the hospital as a precaution.